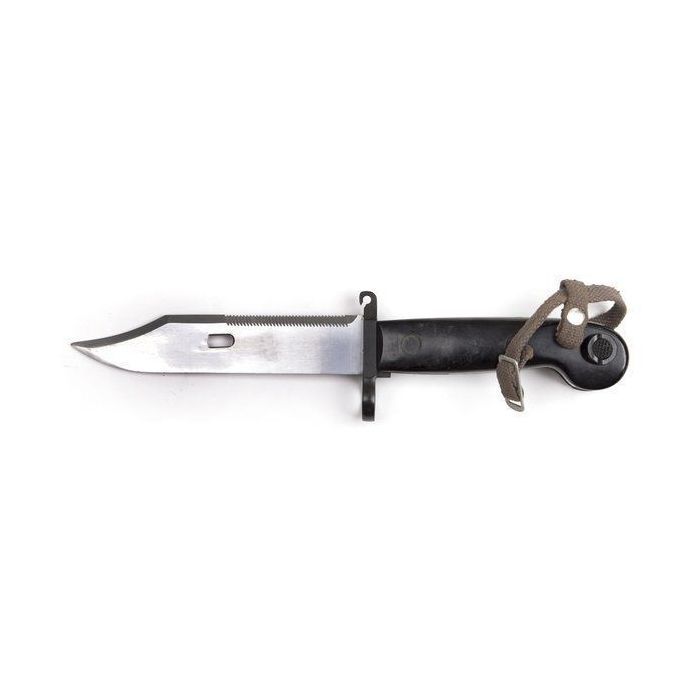 Notify me when this product is in stock
SKU EGAK74BA

The East German AK-47 Bayonet is an authentic Cold War collectible from the former East German Army. This type of AK-47 bayonet was seen in many of the Warsaw Pact aligned nations who fielded the AK-47 with the East German variant being among the best made. The East German Army was seen as the potential front line in a war with the West so the equipment for soldiers was made to be the very best.

Price
Value
Quality
Really Not A Good Buy
Review by Dennis 4/30/16
Missing hand strap as shown in photo. Leather frog ripped at fastening knob. Hand grip well worn. Blade edge has lots of small chips. Blade has crack forming at wire cutter hole. Old style sheath . Which is Ok but not as shown in photo. Pass this dog up. You can find a better one at a gun show or another site. I would not buy this again here. Keep Shooting struck out on this one. Other than this I really do like this seller a lot.
Price
Value
Quality
Not sure why I got one -- not disappointed.
Review by Michael 7/13/14
I just wanted one, so I picked it up. Regardless, it's in pretty good shape. Sheath is gritty, blade could use some love -- but overall not abused and not overly used. Wish I had a German AKM to go with it!
Price
Value
Quality
looks great
Review by Daniel 1/26/14
looks great on my east german akm
Price
Value
Quality
the endless ammo
Review by Michael 1/10/14
If you run out of ammo, don't worry because you can slam a nice combat knife style bayonet on the end of your rifle! Great for wire cutting and evisceration. Plus it will look amazing!
Quality
Price
Value
Revised Review AK47 Bayonet (E. German)
Review by Jill 9/6/13
The five stars are for the quality, price, and value BUT when I tried to attach it to my rifle, I realized it is not a Type 2 as pictured. The one I received is the all plastic handle Type 1. It doesn't work with an AK74 muzzle brake, which is what I have on my Arsenal AKM. Just a heads up to anyone ordering, check with KS before ordering. They were very helpful on the phone and are checking to see if they have the Type 2 in stock. Will update review again.
Quality
Price
Value
Great Bayonet
Review by Bradley 8/18/13
The bayonet I received was practically brand new. Person who it was issued to must have sat behind a desk. Very little signs of wear. One of the best additions to my collection. Excellent product Keepshooting. Thanks.
Value
Quality
Price
E. German Ak Bayonet
Review by Jill 8/7/13
Perfect completion for my AKM. Very nice condition.
Price
Value
Quality
good condition, but collectors beware
Review by josh 5/31/13
I have no complaint about the bayonet or the price, but it should be noted that the model I received was not as pictured.

Both types and combinations are correct for East German issue, but it really would have been nice to know what i was really getting ahead of time, as i prefer the type 2.

You will get an East German bayonet, just know it may not look like the picture.

Price
Value
Quality
I have 2 and I am not sure what they are for. Probably fit many.
Review by Rich 2/12/13
I got a couple of these from Sportsmans Guide and they were used but in good shape and covered in cosmo. They were titled as bayonets for Yugo M70 AK's. I guess they are one or the other but do fit well on my M70AB2.
Quality
Price
Value
Get them when they are back!
Review by Jose 2/1/13
Like Richard said they are going to be a bit greasy but nothing some time behind the boob tube and some elbow grease cant fix. Looks great when displaying your AK and assorted gear. Took a bit of work to get it sharpened but no big drama.
Quality
Price
Value
Great condition and value !
Review by RICHARD 1/13/12
The East German AK74 Bayonet that Keep Shooting sold me is in better condition than the ad led me to expect for the low price. The blade is un-sharpened, un-used, bright and covered with grease. The scabbard is used but in solid condition as is the handle. The wrist strap, hanger, frog and insulator are all present and in good shape. This is well worth the small price.