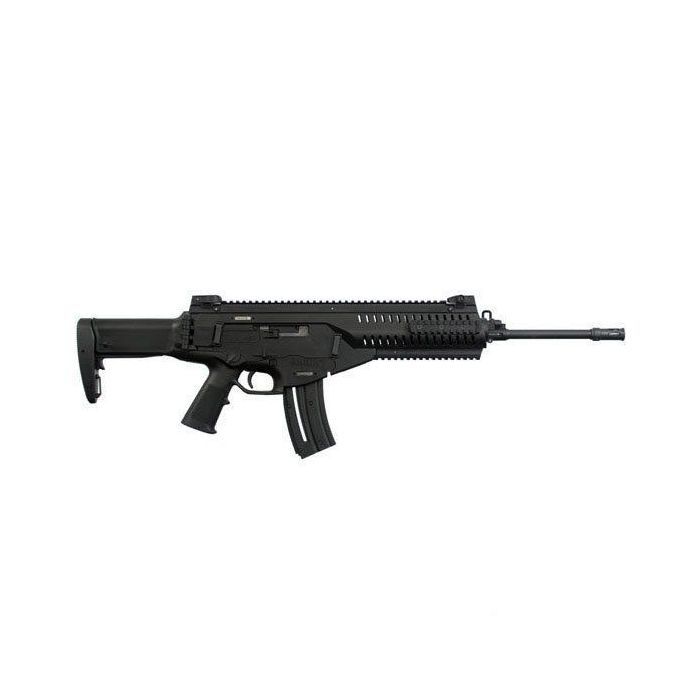 (0)
The Beretta ARX 160 .22 is a semi-automatic, rimfire version of the lauded Beretta ARX 160 that reproduces faithfully just about every aspect of its highly-touted big brother. Chambered for the .22 LR rimfire cartridge rather than the 5.56x45mm NATO cartridge, and adapted for a reliable blowback system of operation rather than a short-stroke piston system, the ARX 160 .22 is the perfect way to train yourself on a platform that looks to take the arms industry by storm.

Beretta, also known as Fabbrica d'Armi Pietro Beretta, is an Italian arms manufacturer established in 1526, making it the oldest active arms manufacturer today. Also noteworthy, is the fact that the company has remained family-owned since its inception. Beretta is known for its wide range of firearms, which include handguns, rifles, shotguns, submachine guns and much more, each of which find markets with the military, law enforcement and paramilitary agencies and civilians the world over. The company even has an American subsidiary and production facility, Beretta USA, which is stationed just a few miles down the road in Accokeek, Maryland. More important than the company history, however, is their innovative firearms, including the new Beretta ARX 160 and its rimfire variant.

Considering Beretta has been around for more than 450 years, it is probably safe to assume that the company produces a fine product. Having said that, I would still like to take this time to discuss what really makes the Beretta ARX 160 .22 worth your time.

Originally introduced in 2008, the Beretta ARX 160 is a commercial weapon system designed by Beretta that was developed for the Italian armed forces as part of the Soldato Futuro program. Currently in service with the Italian army, the Albanian special forces, the Mexican federal police and the military of Turkmenistan, the ARX 160 is, at its heart, based on the AR-15 platform. Its two-piece receiver is composed primarily of polymer, and is joined by a wealth of non-standard features that give the platform an identity all its own. Among those features are: ambidextrous fire controls, including safety, magazine catches and charging handle; the ability to change which side of the rifle spent casings are ejected from; a quick-change barrel that can be removed and replaced without tools;  a foldable, telescoping stock; and a series of Picatinny rails for the attachment of lights, lasers, grips and other tactical equipment.

The Beretta ARX 160 .22 is, as noted, a rimfire version of the original ARX 160. It features a lightweight, chrome-lined 16-inch barrel and an adjustable overall length due to its foldable, telescoping stock. As noted, the ARX 160 .22 utilizes two receivers, both composed primarily of high-strength, impact-resistant polymers that contribute to the platform's light weight of just over 6 1/2 pounds. Though the rifle does include a quad-rail handguard and a receiver-length Picatinny rail, which provides for the attachment of sights, scopes, lights, lasers, grips and more, there are also integral iron sights that are more than capable of allowing one to shoot with pinpoint accuracy. Other features include ambidextrous fire controls, including an AR- and AK-style magazine catch. As noted, the Beretta ARX 160 .22 is chambered for the .22 LR rimfire cartridge and ships with a single 20-round magazine.