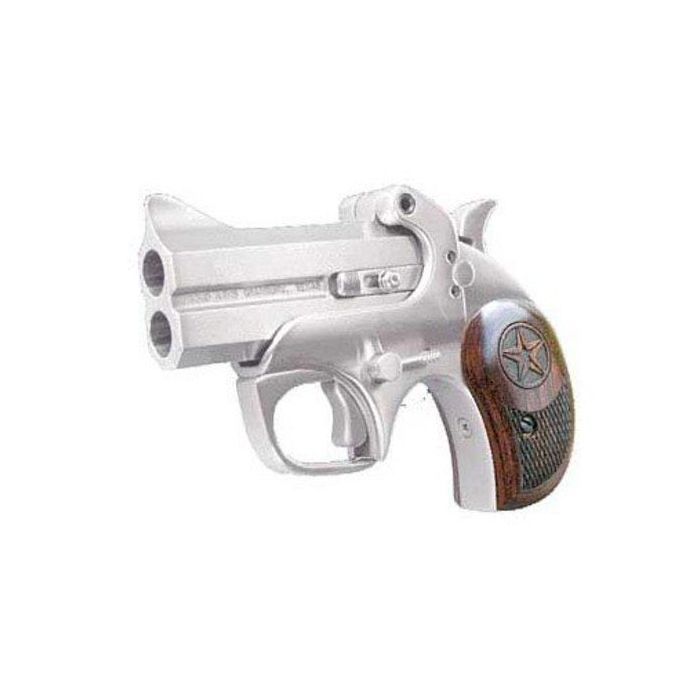 The Bond Arms Texas Defender is a Remington-patterned derringer with two barrels chambered for both the .45 Colt and .410 cartridges. This break-action derringer thrusts the design forward into the 21st century with innovative features, such as its interchangeable barrels and a removable trigger guard designed to provide unparalleled control. Each Bond Arms Texas Defender ships with beautiful laminate rosewood grips inside of a hard plastic case.

Notify me when this product is in stock
SKU BATD45410

Originally organized under the name Texas Armory, Bond Arms was founded and incorporated as such in 1995 by owner and longtime tool and die maker, Greg Bond. Operating out of Granbury, Texas, Bond Arms is a fully American-owned arms manufacturer that is responsible for the design and development of the award-winning Bond Arms derringer – each of which is manufactured from American-made parts entirely in the United States. As a leader in new product design and development, it should come as no surprise that the company is also the largest manufacturer of derringers in the arms industry. Additionally, Bond Arms also manufactures a line of accessory products, including holsters, extended grips and more, which joins their supplemental line of Buck Knives. Today, Bond Arms continues its firm commitment to the design and manufacture of innovative derringers like the Bond Arms Texas Defender – a commitment that has given the company an outstanding reputation for excellence.

Developed as an alternative to magazine-fed semi-automatics for concealed carry and personal protection, the Bond Arms Texas Defender is one of the company's most popular offerings. A pocket pistol in the most literal sense, the Texas Defender boasts reduced dimensions and an interchangeable double-barrel system that offers two shots of either the powerful .45 Colt cartridge or a devastating .410-bore shotshell. Reliable and easy to conceal, the Texas Defender is worth more than a consideration as your next concealed carry or back-up firearm.

The Bond Arms Texas Defender features a double-barrel system that measures three inches in length, making for a derringer that measures five inches in overall length. As noted, the stock barrel – chambered for the .45 Colt and .410 cartridges – is interchangeable with 14 different barrels, which allows the derringer to be fired in conjunction with 24 different cartridges overall. This is made possible by Bond Arms' CNC machining processes, which are used to produce each of their derringers while maintaining strict tolerances of 1/1000th of an inch. A stainless finish is used to protect the derringer from rust and corrosion, while a cross bolt safety is used to protect against accidental discharges. As noted, the derringer includes a removable trigger guard and laminated rosewood grips. Other features include a front blade sight alongside a fixed rear sight.

The Bond Arms Texas Defender is not your great-great-grandfather's derringer. It is a modernized piece of tooling that brings an entirely different definition to the word. It is also an excellent choice for:

Overall Rating
Great gun!
Review by Jacob 2/6/14
Kind of heavy for as little as it is but that's expected. Great self defense weapon.