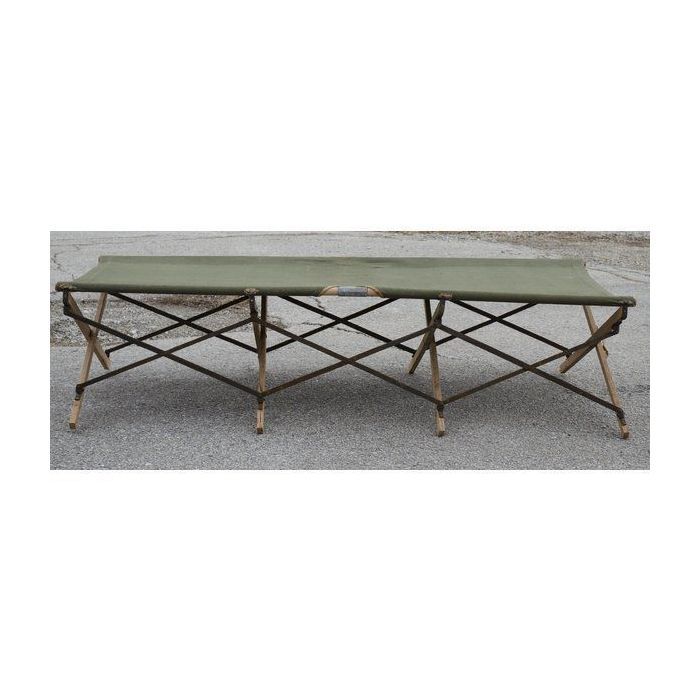 We've managed to locate one of the last supplies of 1950s era Bulgarian Army Cots which came from one of our European partners. These Bulgarian military cots are true relics from the Cold War with both manufacturing and design characteristics that evoke the era perfectly.

Notify me when this product is in stock
SKU BUL-AC

One of the most interesting aspects of military surplus is to see how various governments met the sleeping needs of their armed forces. Virtually all armed forces during the cold war issued some type of cot or field bed. The designs of each government cot can tell a lot about the beliefs, with the Soviet influenced designs being the most robust and over-engineered.

This Bulgarian Army Cot is definitely influenced by the Soviet designs of the Cold War era. The use of both wood and canvas, with steel hinges is characteristic of the Soviet designs of the time. By using these robost materials, the cot that has been produced tends to be significantly stronger and capable of supporting far more weight than cots made by NATO aligned armed forces. When we set one of these Bulgarian cots up to test, we were blown away by how much weight it held without showing any signs of stress or bending.

Overall Rating
Army Cot
Review by kevin 6/5/19
I think the Bulgarian army cots are super cool. After purchasing and using in my home, I ordered another. I'm a veteran and a military surplus freak. I only purchase items that I will use. Only warning is you will wrestle and bust your butt to assemble. You will figure out how to get it done, but your going to work for it. My wife and I enjoy and use these cots daily. Highly recommend to those who love hard core military surplus. Excellent quality for vintage cots.
Overall Rating
Tough and tight!
Review by Bill 8/24/18
As others have said, this is one big, robust cot, which is just what I needed. Fits and holds my American 2XL body comfortably. One caveat, the canvas had shrunk, making the initial setup very difficult. I ended up soaking the material in water and stretching it back out - no easy task, but worth it in the end.
Overall Rating
They don't make them like this anymore.
Review by Msg(MilSurpGeek) 4/18/18
This thing is BIG! I weigh about 200lbs and I'm not short. Fits me like a glove. Set up was a little awkward since it's had some storage. I recommend using any good spray lubricant(Wd-40, break free, one shot) on the joints then working it around until it moves again. Canvas has an odd stain on it. Not sure if it's boot polish or what but nothing a little tlc can't cure.
Looking for a cheap cot that isn't that aluminum framed, low grade, junk? This is it.
Overall Rating
Very sturdy and interesting old world quality Army cots
Review by powderbob 11/15/17
Received my two Bulgarian Army cots, very well packed by the staff of Keep Shooting and well delivered to my home by FedEx. They came with canvas carry bags and handles for easy transport and are a bit on the heavy side, but are kind of compact and are nothing for a good back country packing horse or a mule. The quality is typical of the 1950's old world and in particular Bulgarian with Cold War era, old Soviet influence, simple, sturdy and cheap to make. Had a little difficulty stretching the bedding canvas and attaching it to the metal frame hooks, I guess the cots weren't used very many times. Then the frame, which is made of wood and harmonica style metal hinges and the canvas bedding are really made very heavy duty and will hold good amount of weight, even mine.
All and all, I am happy with my order and thanks to the folks from Keep Shooting , I have now a genuine Bulgarian Army old style cots to go with my genuine Bulgarian Army Tent which I bought some time ago for back country camping and horse backpacking. Heck, I'm thinking of buying more of these cots, I haven't seen them anywhere else for sale and the tent is big and I have a big family.