A civilian version of the famed M4, the Bushmaster M4A3 Patrolman carbine is a semi-automatic, gas-operated carbine that utilizes a rotating bolt. The Patrolman is chambered in 5.56x45mm NATO/.223 Remington and is a perfect choice for a variety of activities ranging from recreational shooting and small-game hunting to military and law enforcement operations. Each carbine comes with a single 30-round magazine. 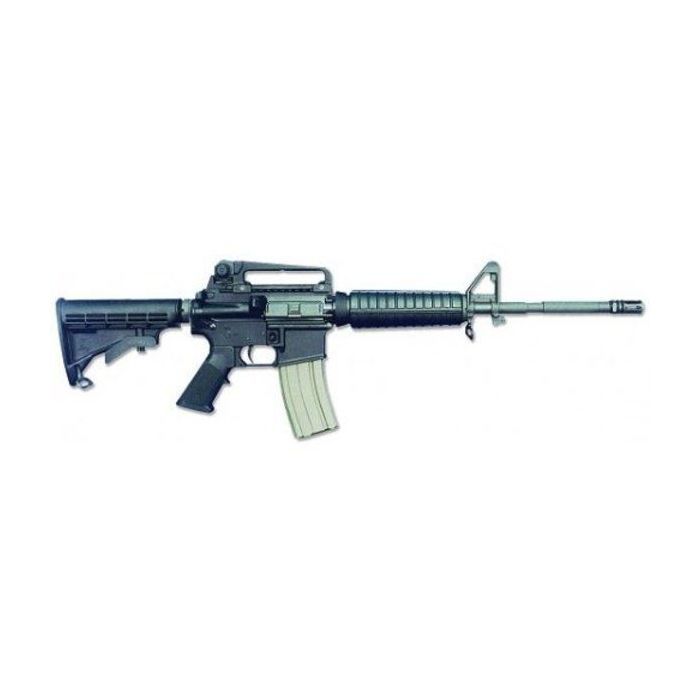 In 1973, a company was founded in Madison, North Carolina with an aim to provide a line of high-quality AR-15-patterned rifles and carbines. That company was Bushmaster Firearms International LLC. Now, nearly 40 years later, Bushmaster is known for its line of firearms that provide the military, law enforcement agencies and civilians with AR-15-patterned firearms known for their quality, reliability, accuracy, durability and value. Today, Bushmaster still makes its home in Madison, North Carolina, though its production facility is in Ilion, New York.

The M4 carbine is a part of a family of firearms that can be traced back to M16 rifle, which was originally based on Eugene Stoner's AR-15. Though very similar to the M16, the M4 is both shorter and lighter than the M16 and is equipped with a six-position telescoping stock. Though the M4 and the M16 have 80 percent parts commonality, some key differences do exist. The major difference is the shortened barrel characteristic of the M4, which typically measures 14.5 inches. Today, the M4 is swiftly replacing most M16s still in service with the United States Army.

The Bushmaster M4A3 Patrolman carbine is one of the company's most popular civilian versions of the M4. Based on the M4-type carbines that the company is famous for, each Patrolman is built with an increased barrel length to make them BATFE compliant. It is also worth noting that the Patrolman is available in two different configurations: the M4A2 and the M4A3. As noted, the configuration available here is the M4A3, which includes a removable carry handle that, when removed, offers access to an integrated MIL-STD 1919 rail.

The Bushmaster M4A3 Patrolman carbine features a 16-inch, chrome-lined barrel (1:9-inch twist rate) and an overall length of 32.5 inches. The chrome lining serves to protect the barrel and the chamber from rust and corrosion as well as giving them higher resistance to wear. The inclusion of a muzzle brake is intended to reduce recoil and muzzle rise. When combined with the synthetic six-position telescoping stock, you get a carbine that weighs in at just 6.7 pounds unloaded. The carbine also includes a standard M16-style front sight as well as a dual aperture rear sight that is adjustable for both windage and elevation. As noted, the carbine is chambered in 5.56x45mm NATO/.223 Remington and includes a single 30-round magazine. This carbine is compatible with all STANAG 4179 magazines.

What more can be said about the Bushmaster M4A3 Patrolman carbine other than the fact that it is a Bushmaster. That alone gives you an idea of the quality you can expect. Consider this carbine for:

Reviews 1
Write Your Own Review
Only registered users can write reviews. Please Sign in or create an account
Product Questions
Customer Questions
No Questions
Related Products
We found other products you might like!
Copyright © 2002-present United Defense LLC. All rights reserved.