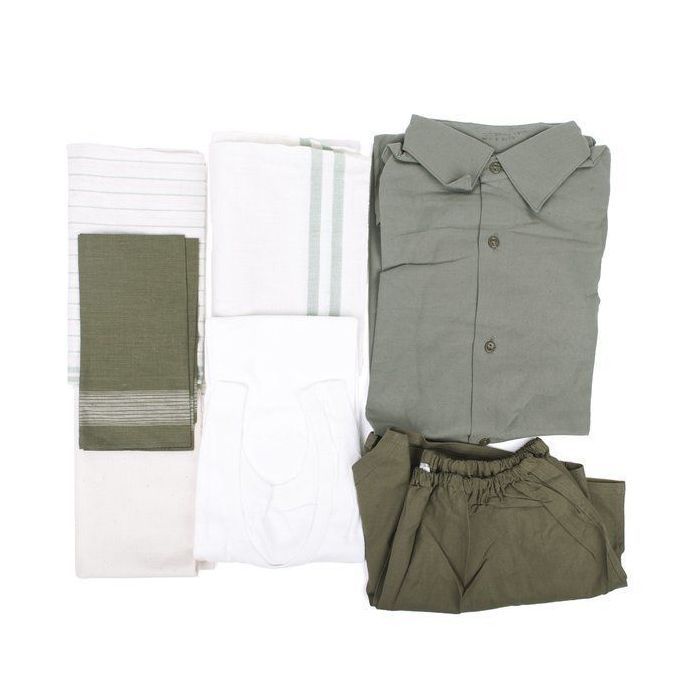 The Czech Army Enlistment Pack is a set of clothing and other personal items that was issued to every new soldier in the Czech Army. Based on the dates we have obseserved these enlistment packs were from the era of Czechoslovakia as we have not found any dates on them post 1993. This time period was full of turbulence for any Soviet aligned nation and the fit and finish of each garment is evocative of Soviet ideology.

The Army of Czechoslovakia was one of the largest of the Warsaw Pact during the height of the Cold War. With a 200,000+ standing army, there was a constant need for new recruits to ensure a sizable and ready fighting force. With this need for new recruits and Soviet style thinking on the needs for these recruits, the Czech army standardized an enlistment pack that contained the items you see here.

There are six items that form the basis for the Czech Army Enlistment Pack. These items are an undershirt, dress shirt, handkerchief, boxer shorts, and two towels. Once issued these basic essentials new recruits would then be issued additional uniform kit once completing basic training and being assigned to a new unit. The look and feel of each item in these enlistment packs evokes the time of Communist rule over Eastern Europe and should be a welcome reminder of why the Cold War was ultimately won by the West.

Overall Rating
Not bad for the price
Review by MelV 7/16/21
I got a long sleeve brown shirt with white undershirts, 2 thin different size towels, a brown boxer shorts, a brown hankies and a thin brown socks. Good deal indeed.
Overall Rating
good quality for the price
Review by A person 10/2/19
Fair warning, it dose not come with pants. I find it hard to belive the Czechs would leave you without pants. But maybe they made there own pants from the 4 towels. the shirt I got was from 1976, which was neat.
Overall Rating
Great item
Review by Mark 5/26/17
I bought several of these to get different variations and dates for my Czech collection... Great item at a decent price. dates ranged from the late 1960's to 1990. Mostly in the 1970's-80's. Some come with foot wraps and some with socks. Great Customer Service as always.
Overall Rating
Good bargain
Review by Tim 1/31/17
While there wasn't a shirt my size and even the smallest was too big, the button up makes a good sleeping shirt, the boxers aren't bad they even have a back pocket, and the couple dishrags are great. You couldn't get all of it for the same price at Walmart, and that impresses me. I wouldn't buy a second one, but I'm very happy with what I got.
Overall Rating
owned these before
Review by carol 1/16/17
purchased this set awhile back from sportsman guide when gary olen ran the place. (all gone down hill now), so purchased this set from KS and am ordering another set. Great Quality and a great Company to be able to keep stocking all these great old surplus items. I will be a repeat customer!
Overall Rating
Okay
Review by Jack 11/21/16
It's okay. I got 2 towels, a handkerchief, undershirt, and a button up shirt. It's not the best quality, but it all fit.
Overall Rating
Hell of a deal!
Review by Robert 1/7/16
The towels are perfect for dishes, also the handkerchief and undershirt are department store quality. The dress shirt is worth the seven bucks alone, but I guess the pinko bastards didn't believe in sewing on a pocket on for my glasses. The only thing that might hit the rag pile are the boxer shorts, which ironically have a pocket on the side. I ordered two sets, one package contained some really nice socks. All in, it's a hell of a deal for stuff you can use day to day.
Overall Rating
good product
Review by that guy 11/12/15
Goes great with the rest ofthe czech uniform i have. Good for reenactors looking for original gear