Say goodbye to cotton and say hello to warm, quilted nylon. Our new Czech M85 pants liner works just like long johns, but are capable of keeping you warmer than warm during the chilliest of chills. Perfect for any cold, outdoor activity or everyday use, these pants liners are designed to be worn under your outer layers and remain in excellent condition. 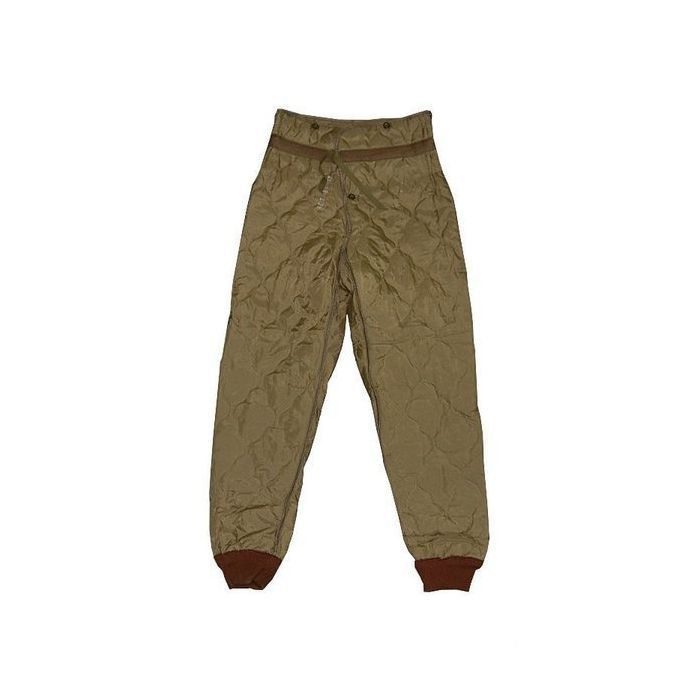 Each Czech M85 pants liner offered by Keepshooting.com is an authentic piece of Czech military surplus. These pants liners were originally designed for and issued to members of the army of the Czech Republic, which consists of the general staff of the Czech armed forces, joint forces and support and training forces. Interestingly enough, this piece would have been issued with a series of other equipment, including the Czech military M85 parka, also available from Keepshooting.com.

Despite being considered military surplus, each Czech M85 pants liner appears to be completely unissued and unused. As such, these pants liners remain in excellent condition and are ready to keep you warm as an under layer on the coldest winter day.

As noted, each Czech M85 pants liner appears to be unissued, meaning each is also free from the typical rips, tears and stains that often plague previously issued military surplus clothing. Surprisingly, they even lack that familiar military surplus smell, a quality that stems from what we can only assume was proper storage. Still, prospective buyers should expect to wash each pants liner prior to use, and should not expect every piece to be without fault. Those looking for a unique piece of Czech military history or an inexpensive alternative to long johns and other thermal underwear should consider picking up a Czech M85 pants liner today.

The Czech M85 pants liner features a predominantly quilted nylon construction. Both interior and exterior sport the material, which is insulated to provide warmth for the wearer. The pants liner is secured via a button fly, but also includes a cloth tie at the waist for a tighter, custom fit. Other features include elastic, rib-knit ankle cuffs for warmth and comfort.

Reviews 8
Write Your Own Review
We found other products you might like!
More from Czech Army Surplus
Copyright © 2002-present United Defense LLC. All rights reserved.