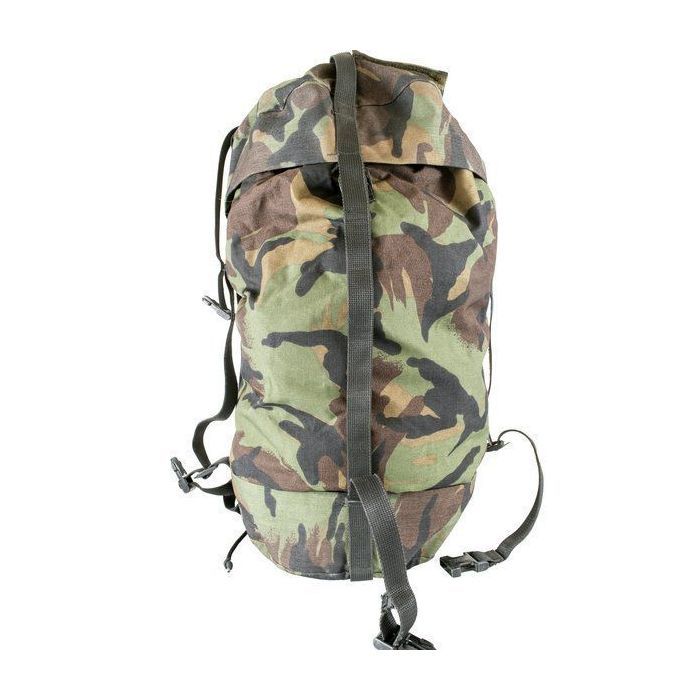 The Dutch Woodland Camouflage Compression Bag is a large compression sack from the Dutch Army. Designed to carry the large NATO style extreme cold weather sleeping system, this compression bag is capable of carrying  a large volume. The four compression straps will allow you to compact your load down to the smallest form factor possible.

The Dutch Army is known as the Royal Netherlands Army and has been a NATO member since the inception of NATO. With NATO membership, the Dutch Army has standardized their field equipment to match other NATO forces. This can easily be seen by the Royal Netherlands Army adopting the British Woodland DPM camouflage pattern which you can see was used on this large compression bag. By having NATO membership, the requirements for the equipment used by the Dutch Army need to meet or exceed NATO standards making Dutch surplus very high quality.

This large compression bag would have been issued to soldiers in the Dutch Army to carry the NATO style extreme cold weather sleeping system. With this large compression sack, soldiers would have been able to carry all of the parts of this sleeping system to ensure they were able to stay warm and comfortable in the coldest of cold environments. The large design of this compression sack means you can stuff it full of soft goods, like clothes, and then use the four compression straps to compress the load you are carrying down to the smallest form factor. With space and weight distribution being essential when carrying gear out into the field, the military has made extensive use of compression sacks to help increase the amount of gear that can be carried and reduce the stress on the soldier who is carrying it.

Overall Rating
Great sized compression bag!
Review by Justin 9/21/15
I was so impressed the first time I got it, I have ordered this compression bag twice. I was expecting a bag about the size of something to compress down a sleeping bag. I was pleasantly surprised! LARGE! This thing is very big. I used mine for a motorcycle camping weekend. Mine fit a sleeping bag, pillow, extra blanket and a few changes of clothes. No problem. It cinches down well. It is thick and appears durable. I would also consider this water resistant. Straps are ample. You cannot find this bag's equivalent in any store...let alone this price. Very pleased. If this thing had a shoulder/carry strap it would be perfect. Both of my bags arrived in excellent condition. No funky smells. They had been issued with soldier's names on the ID window, but good condition otherwise. Thanks KS!
Overall Rating
DPM cinch bag
Review by Kriegshunde 9/1/15
This is a Heavy duty large bag . mine looks as if it hasnt been used. i ve been looking for a DPM cinch sack to match all my other DPM gear for my military sleep system and was happy to see them come in at such a great price at keepshooting.com. The first one I received had broken clips but Keepshooting.com worked with me to get me a replacement .
Overall Rating
Unique function and size..
Review by Michael 8/21/15
Firstly, this sucker is bomb proof beyond belief.. And it's big, real big. Think uncompressed the size of a pack liner. Brilliant piece of kit for an amazing price, weighs two pounds and looks to be geared specifically towards heavy weight winter sleep systems.
Hammock users take note. If you have an under quilt system that is large and unwieldy this is the compression sack for you! I have a very large artic British sleeping system and this bag does a great job of compressing it out. Great unique product, and is wonderfully water resistant.