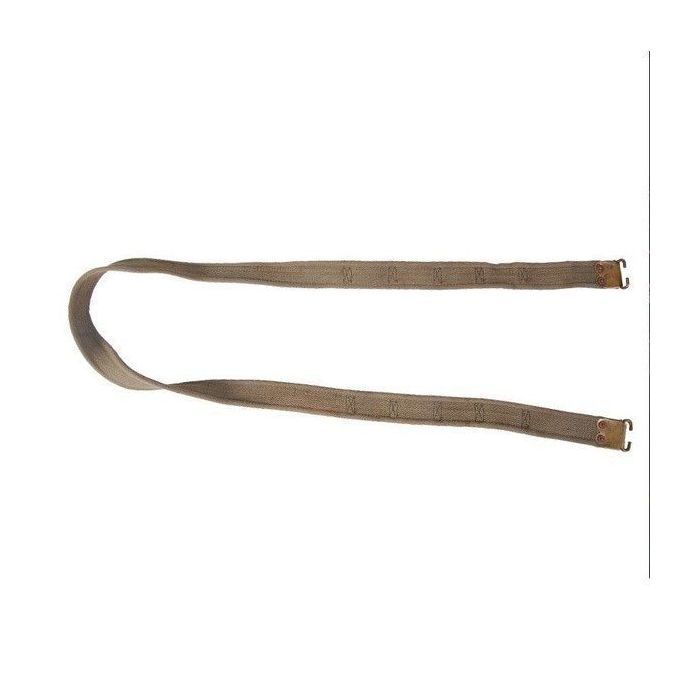 4.8 5 (5)
When it comes to military firearms, the United Kingdom does not exactly stand out as the biggest innovator. They do however, lay claim to a pretty famous, pretty popular service rifle in the Lee-Enfield.

Each Lee-Enfield rifle sling offered by Keepshooting.com is an authentic piece of British military surplus. These slings were originally designed for and issued alongside Lee-Enfield service rifles to members of the British army, one of the three professional uniformed service branches of Her Majesty's armed forces, otherwise known as the British armed forces.

Though we are unable to confirm issuance of our Lee-Enfield rifle slings, each appears to have seen some use, but remains in good condition and is still fully capable of providing the finishing touches on your Lee-Enfield rifle. Likewise, each Lee-Enfield rifle sling is free from the typical rips, tears, stains and scents that often plague previously issued military surplus equipment. Those looking for a unique piece of British military history or an original sling to replace the reproduction currently keeping their rifle company will surely be pleased with these slings.

No matter what the reason for your purchase, we can all but guarantee that you will be pleased with our original Lee-Enfield rifle slings. Pick one up and complete your rifle today for only $9.95.

Overall Rating
sling
Review by alex 4/19/16
Verified Buyer
Very good serviceable sling. They are filthy so i recommend that toss them in the washer.
Overall Rating
Excellent customer Service
Review by Tim 6/6/15
Verified Buyer
The first sling I ordered was missing a rivet, so I contacted customer service and they promptly shipped a replacement.
The replacement sling is in good condition and matches my rifle very well.
I am very pleased with this purchase.
Overall Rating
Not just for a Lee Enfield
Review by Jason 7/5/14
Verified Buyer
I have a few of these for awhile. For what Keep Shooting is selling them at I should buy another. I have one of these on my Lee Enfield No 4 MK 1. One of the other reviews mentioned that these a probably Belgian, which makes sense since I believe these were also used on the FAL. However, I have found them pretty useful for just about any type of rifle. These slings are comfortable and quick to adjust.
Overall Rating
Nice Enfield Sling
Review by Henry 4/10/14
Verified Buyer
Nice piece of history for less than ten bucks!
Looks good on my Lee-Enfield (actually Springfield-Savage for the Lend-Lease Program of WWII) No 4 Mk1*, dated 1942.
Overall Rating
Belgian Slings
Review by Harquebus 5/21/11
Verified Buyer
I ordered two of these slings expecting them to be used but in very good condition British Lee-Enfield slings as per the description. Since I have rifles that are equally well-used, they would not look right with new slings mounted so I expected them to show some age or use. What I received are new slings that have slight storage wear or discoloration on the brass fittings in the form of tarnish. I later learned these slings are not of UK origin but Belgian. One of them has a faint A.B.L. stamping that translates to Armée Belge / Belgisch Léger or Belgian Army in English. The brass fittings differ slightly as original Enfield slings have an indentation or crease stamped into three edges of the brass end pieces; the Belgian sling fittings are smooth. Strangely, one of them is roughly 44" long, the other is approximately 41.25". An original Enfield sling I have measures out to be 44.25" and has most likely stretched with age. All in all, they are nice slings. They look the part and I will be keeping them for later use. I only rate them 4 out of 5 stars in the Quality and Value areas because they are not quite what I expected.