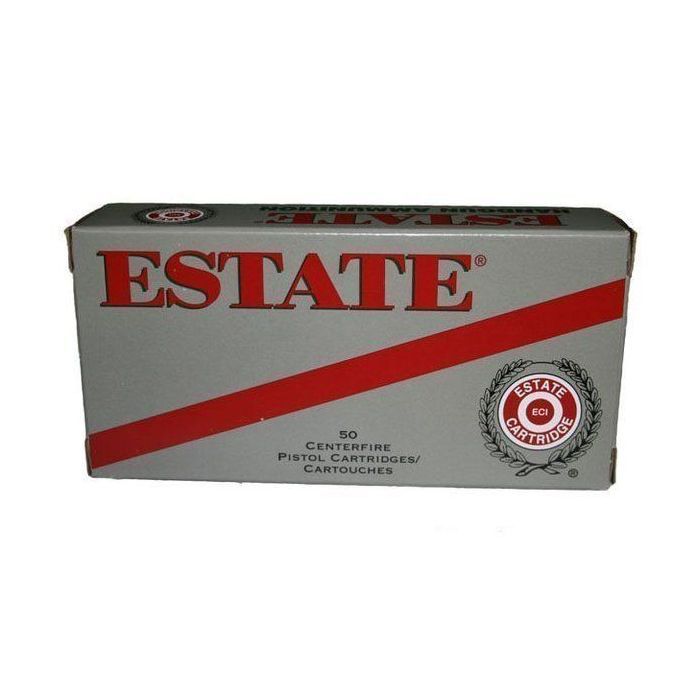 Each box of Estate .38 Special ammunition is a product from the Federal Cartridge Company. Developed as an economy load, this ammunition makes its way from the "Estate" brand, and is marked by its accuracy, reliability and respectable performance as compared to other leading manufacturers' economy lines. Perfect for plinking, target practice, training exercises and more, each box contains 50 brass-cased cartridges – each of which contains a 130 gr full metal jacket projectile. These non-corrosive cartridges are perfect for use with any platform chambered for the .38 Special cartridge.

Notify me when this product is in stock
SKU ESH38130

Estate .38 Special ammunition is a product from the Federal Cartridge Company's "Estate" brand of ammunition. Estate ammunition is marketed as an economy load suitable for precision practice as well as a range of other shooting applications, including various training exercises. Developed specifically for high-volume shooters and priced accordingly, Estate ammunition offers positive performance on par with Federal's more expensive Estates. And like all Federal ammunition, Estate .38 Special ammunition is manufactured at the Lake City Army Ammunition Plant (LCAAP) in Estate, Missouri, which is an interesting aspect of the ammunition in itself. LCAAP is a government-owned, contractor-operated munitions facility that was originally established in 1941 for the manufacture and testing of small arms ammunition for the U.S. Army. Since 2001, it has been operated by Alliant Techsystems and is the largest manufacturer of small arms ammunition for the U.S. Army.

That said each box of Estate .38 Special ammunition contains 50 non-corrosive, brass-cased cartridges. Each cartridge contains a 130 gr full metal jacket projectile, which provides for increased muzzle velocities. In fact, this load is capable of producing muzzle velocities that have been observed to travel at speed of up to 1,050 fps.

Overall Rating
Same rounds as Eagles but slightly cheaper! Bargain
Review by Eric 3/10/13
First off thanks to Keep Shooting for great and quick service.

Appearance:
All three federal branded ammo looked the best and all were very similar to one another especially the Estates and Eagles. The independence rounds were branded Blazer at the bottom of the brass while the other two simply said "federal" on the bottom. All three federal ammo looked grreat, nicel clean brass and clean crimps. The UMC and the WWB on the other hand appeared much more rough with scratched and lightly dented brass while none of the federal ammo had any of these characteristics.

Conclusion:
These Estates shot well and looked great but I dont really understand why its identical Eagle rounds cost more than them. All federal ammo performed well and the Estates and Eagle actually looked Identical round down to the brass. If it were my money I'd buy these slightly cheaper Estates rounds over the Eagles any day. Same rounds but slightly cheaper.