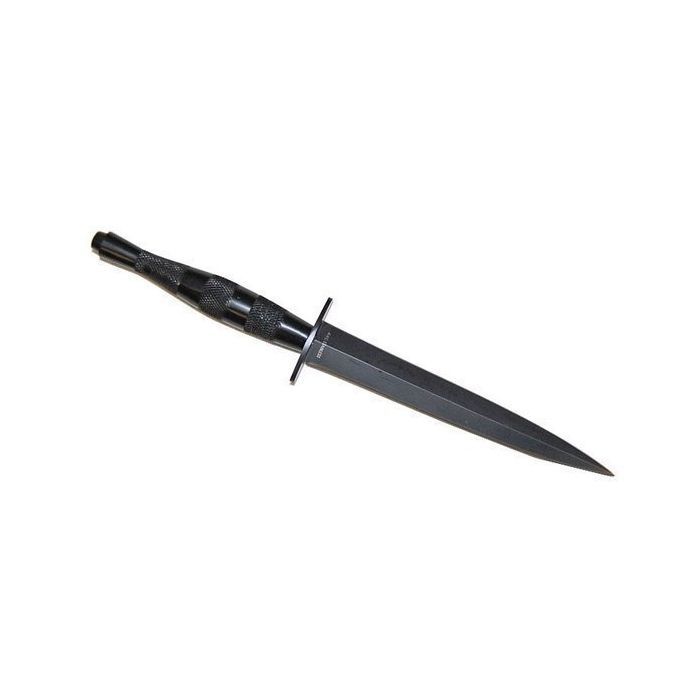 4.8 5 (5)
Keepshooting.com now carries a beautiful reproduction of the Fairbairn-Sykes fighting knife, a knife made famous during World War II for its utility in hand-to-hand combat. Designed specifically for fighting in close quarters, this dagger features a long, slender blade and a razor-sharp point that makes it ideal for stabbing or thrusting motions. It is sure to find a home with both reenactors and collectors alike.

As noted, the Fairbairn-Sykes fighting knife is not an original surplus item – it is a reproduction, and an excellent one at that. As such, it is in perfect condition, ready for displaying as a collectible or adding to your World War II reenactment gear.

The Fairbairn-Sykes fighting knife was originally designed and produced in 1941, with only about 2 million original knives produced by the Wilkinson Sword Company. They became famous after seeing use with the British Commandos and the Special Air Service (SAS). Easily recognized by their long, tapered blade and foil-like handle, the fighting knife can easily penetrate the ribcage and inflict damage to vital organs.  Additionally, the handle provides for a number of precise grips normally associated with knife fighting.

Through the years, the Fairbairn-Sykes fighting knife found use in a number of different countries with several units. Additionally, it spawned several copies and served as inspiration for several other fighting knives, including the United States Military’s Office of Strategic Services’ (OSS) dagger and the United States Marine Corps’ KA-BAR. Interestingly enough, the Fairbairn-Sykes fighting knife itself was produced with a number of different variants, though those details are too lengthy to address here. Typically, the differences were in blade length, crossguard shape and grip pattern. I will, of course, discuss the specifications on the knife advertised here.

Keepshooting.com’s Fairbairn-Sykes fighting knife features a blade constructed entirely from 440 stainless steel and includes a black finish. It measures 6.5 inches in length and is about one inch at its widest point, which tapers down to a razor-sharp point and is capable of penetrating both layered clothing and skin. The knife also has an oval-shaped crossguard and a foil-like handle that allows the wielder to take several different fighting grips. There are also three sections of crosshatched knurling designed to provide a secure grip. The knife has an excellent weight distribution which provides great balance. It is a joy to hold.

Though the Fairbairn-Sykes fighting knife is renowned for its use in hand-to-hand combat, it is typically sought out for its collectability and does pretty well for itself on the surplus market. Those interested in WWII reenactments will surely be drawn to this knife, but you may consider it for any of the following:

At only $24.95, the Fairbairn-Sykes fighting knife makes a great gift idea for the military enthusiast in your life.

Note: This item is being sold to you as a collectible. Please check your local laws for any regulations that prohibit the ownership of a knife of this design. To purchase this knife, you must be at least 18 years old. An adult signature may be required when delivery is made. 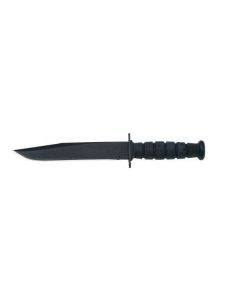 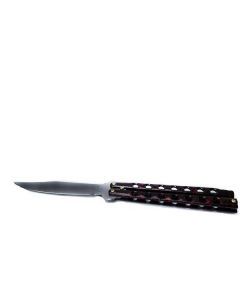 Overall Rating
Decent reproduction
Review by SGT SURVIVAL 12/8/15
Verified Buyer
While not a true reproduction (the handle varies from the original), this one is of much better construction than most I have owned/observed. Also be advised that it does not come with a sheath.
Overall Rating
Badass look
Review by 53GR 7/15/14
Verified Buyer
As previous reviewers have mentioned, this is a copy of the original and it is not intended to be a utility blade. The original was intended as a thrusting/stabbing weapon, and will break if used as a utility tool.
Be cautioned that since it is such a thin blade (with a very sharp edge), it will dull and bend more easily than thicker knives. As long as you use it as it was intended (this particular model mainly as a display piece), it will function just fine.
Overall Rating
Good reproduction
Review by KP Duty 3/20/14
Verified Buyer
I bought this as a novelty. I’ve compared it to an original my uncle owns and it compares favorably. The sheath is the obvious giveaway. This works great as a letter opener, can’t speak to other uses.
Overall Rating
Love It!
Review by Jose USMCR 1/12/14
Verified Buyer
Light weight. Concealable. Plenty of reach. Well balanced. Remember stabs kill slashes disable. This knife does both well. This is not a utility knife. Purely a fighter.
Overall Rating
Nice "little " poker
Review by igor 10/8/13
Verified Buyer
Not bad for a chinese copy . Average user will be fine with it .Ok to trow in a tree but will reinforce with some welding , i tend to abuse cutlery