Federal Power-Shok 30 Carbine is designed to be a verrsatile hunting load. Accuract, reliable, and ballistically efficient for hunting medium to large game with your favorite 30 Carbine rifle. With each round being constructed of premium components you can count on high performance with each cartridge being suitable for reloading for those who reload their own ammunition. 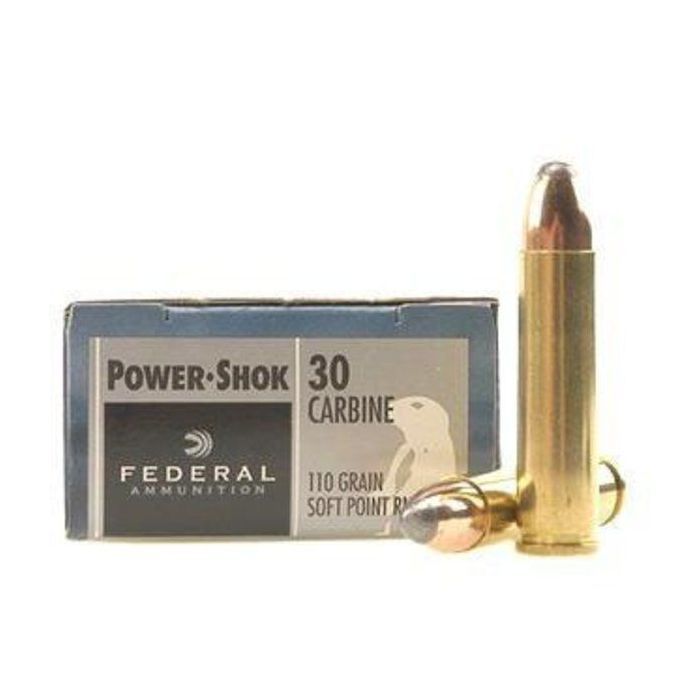 As noted, Federal 30CA Power-Shok .30 Carbine ammunition is a product from the company's "Power-Shok" brand of ammunition, which encompasses handgun, rifle and shotgun ammunition. Federal Power-Shok ammunition is marketed as an effective but affordable line of ammunition that was developed specifically for hunting medium to large game. By pairing state-of-the-art loads with revolutionary projectiles, the company is able to offer a product marked by outstanding accuracy, reliability and ballistics. And with a wide range of loads, you are sure to find one that suits your needs. Like all Federal ammunition, Federal 30CA Power-Shok .30 Carbine ammunition is manufactured at the Lake City Army Ammunition Plant (LCAAP) in Independence, Missouri, which is an interesting aspect of the ammunition in itself. LCAAP is a government-owned, contractor-operated munitions facility that was originally established in 1941 for the manufacture and testing of small arms ammunition for the U.S. Army. Since 2001, it has been operated by Alliant Techsystems and is the largest manufacturer of small arms ammunition for the U.S. Army.

The cartridges found in every box of Federal 30CA Power-Shok .30 Carbine ammunition begin with a soft point round nose projectile. The shape of the soft point projectile provides a broad frontal area that translates to high-energy impacts and rapid, controlled expansion up to twice the size of the original diameter.

As noted, each box of Federal 30CA Power-Shok .30 Carbine ammunition contains 20 non-corrosive, brass-cased cartridges. Each cartridge is loaded with a 110 gr soft point round nose projectile, which provides for both superior external and terminal ballistics as well as increased muzzle velocities. In fact, this particular load is capable of producing muzzle velocities that have been observed to travel at speed of up to 1,990 fps.

All Federal ammunition is manufactured using fully-reloadable, newly-manufactured brass cases as well as non-corrosive Boxer primers. Additionally, all cartridges are visually inspected prior to leaving the manufacturing plant.