Each box of Federal F12700 Power-Shok buckshot is a product from the Federal Cartridge Company. Developed as a versatile economy load marked by its accuracy, reliability and ballistics, Power-Shok buckshot employs premium raw materials and loading practices. These premium shotshells are optimized for a range of applications, including hunting, tactical operations and home defense. Each box, contains five premium shotshells. These shotshells measure 2 3/4 inches in length and contain nine pellets of double-aught (00) buckshot, each of which is perfect for use with any 12-gauge hunting or defense shotgun. 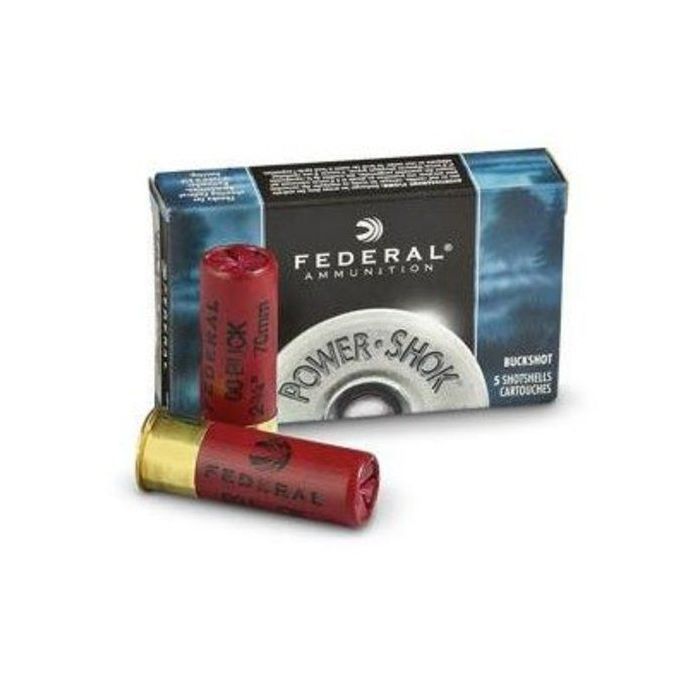 Federal F12700 Power-Shok buckshot is a product from the company's "Power-Shok" brand of shotshells. Federal Power-Shok buckshot is marketed as an effective but affordable line of shotshells developed specifically for hunting medium game. By pairing state-of-the-art loads with revolutionary projectiles, the company is able to produce a shotshell marked by outstanding accuracy, reliability and ballistics. And with a wide range of loads, you are sure to find one that suits your needs. Like all Federal ammunition, Federal Power-Shok 12-gauge buckshot is manufactured at the Lake City Army Ammunition Plant (LCAAP) in Independence, Missouri, which is an interesting aspect of the ammunition in itself. LCAAP is a government-owned, contractor-operated munitions facility that was originally established in 1941 for the manufacture and testing of small arms ammunition for the U.S. Army. Since 2001, it has been operated by Alliant Techsystems and is the largest manufacturer of small arms ammunition for the U.S. Army.

That said each box of Federal F12700 Power-Shok buckshot, as noted, contains five premium shotshells. Each 12-gauge shotshell measures 2 3/4 inches in length and contains nine pellets of double-aught (00) buckshot, which is an ideal load for hunting deer and other medium game. Additionally, this particular load is capable of producing muzzle velocities that have been observed to travel at speeds of up to 1,325 fps.

Reviews
Write Your Own Review
We found other products you might like!
More from Federal
Copyright © 2002-present United Defense LLC. All rights reserved.