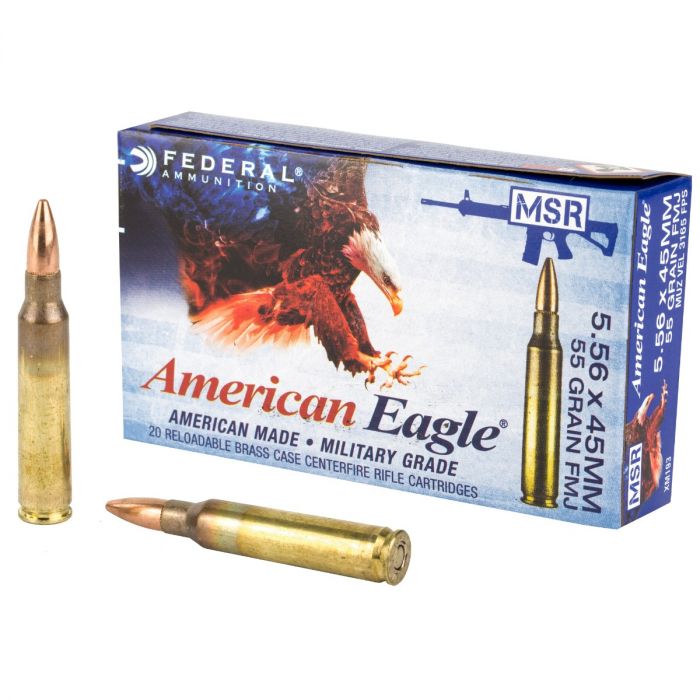 Each box of Federal XM193 5.56 ammunition contains 20 cartridges, each of which features a 55gr full metal jacket bullet. These non-corrosive cartridges use a brass case and will work perfectly with any AR-15 chambered in 5.56x45mm NATO.

Notify me when this product is in stock
SKU XM193

As noted, each box of Federal XM193 5.56 ammunition contains 20 cartridges. Each cartridge contains a 55gr full metal jacket bullet, which provides for higher muzzle velocities. In fact, the XM193 load features a velocity of approximately 3165 fps. Each cartridge uses a brass case and includes a water-resistant lacquer primer sealant for enhanced performance and reliability. All cartridges are visually inspected at the plant prior to packaging.

Overall Rating
Good Inexpensive Ammo
Review by Infidel 8/5/14
I use this stuff for practice because at 100 yards it has close to the same point of impact as my reloads and it is plenty accurate for its intended use. I like the annealed cases because I can reload them a few more times than the non-annealed cases.
Overall Rating
Buy it when it comes back!
Review by Jose USMCR 1/12/14
This ammo is super. I use this to sight in my AR type rifles. Quality and great price.
Overall Rating
m4 food!
Review by Michael 12/31/13
This is the pinnacle of the 5.56. This is something that you can't have to much of. No reason for hp at that velocity. Penetration and fragmentation. Need I say more?
Overall Rating
M193 Ball
Review by Z 1/24/13
This is the best 5.56 ball out there. All 5.56s should work well with it, I know my Mini 14 does!
Overall Rating
The standard
Review by Zane 6/21/12
This is the classic ball ammo by which others are measured. Keep an eye out for this ammo to come back in stock. I know I will!