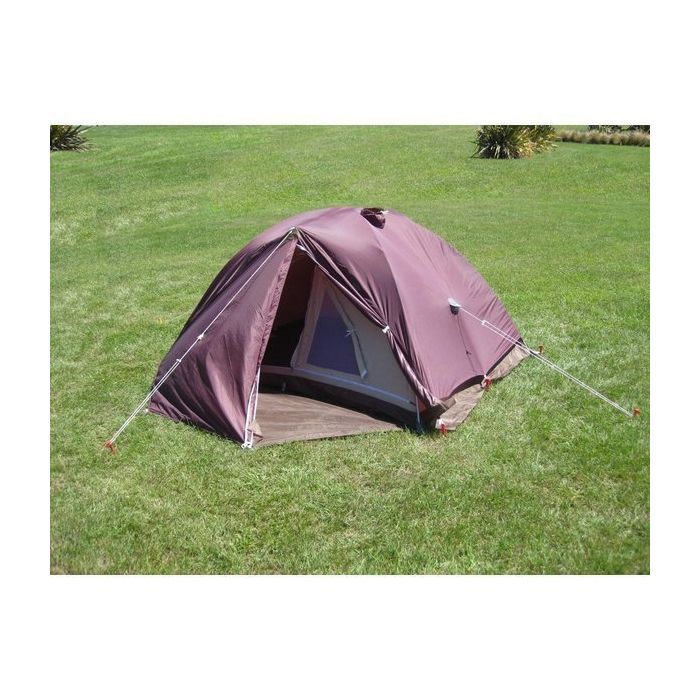 The French Army Alpine Dome Tent is a high performance tent from the French Foreign Legion. These tents would be deployed for use by soldiers in areas where the weather was extreme, either hot or cold. The tent is designed in a manner that provides for use in both extreme conditions and is designed to fit up to three soldiers.

The French Army Alpine Dome Tent was designed and deployed for the elite Foreign Legion soldiers. These soldiers operate in the extreme areas of France, Europe, and the world. With conditions ranging from the extreme cold of the French Alpine region to tropical climates in former French colonies, these tents are designed to provide shelter in both types of extreme climates.

The dome design of these tents provides superior wind resistance. There is a water resistant flysheet that is included with the tent, which will keep the rain and snow from soaking through the base tent. The base tent and fly sheet are equipped with both ventilation holes suitable for using with a tent heater and mosquito windows for allowing for ventilation without letting in insects. Once assembled fully, there are double vestibules on each side of the tent which will act as storage compartment for your wet gear that you do not want to bring into the tent.

Overall Rating
Nice tent, clearly used.
Review by ilikeleptons 11/10/16
I've had lots of good luck with french military surplus, and this tent is no exception. Although a bit on the heavy side, it is well built and has some really interesting features that would normally only be found on much pricier tents. Having mosquito nets and two doors makes the tent very easy to ventilate, and the heater exhaust holes will be really interesting to experiment with.

My tent in particular was pretty well used. The bags showed lots of wear, one of the mosquito net windows had a small hole in it, and one segment of a tent pole was bent. None of these were major problems, but it is clear that these tents were used a lot.
Overall Rating
great tent
Review by don 11/8/16
I put the tent up the day it came to check it out. It was easy to put up, everything was there, it was all in great condition. Great price when compare to what is out there. I did have to add a few tent stakes to the bag, no big deal. You have to remember this is military surplus. As long as all the main stuff is there all is good. After putting it up and cleaning it crawled in the dog follwed me in and we both took a nap. If you are looking for a tent this is a great deal.
Overall Rating
Great quality
Review by Terry 10/29/16
. Much better quality than cheaper commercial tents. Had to use a bit of seam sealer on some of the sewing , but that was it. Great condition otherwise.