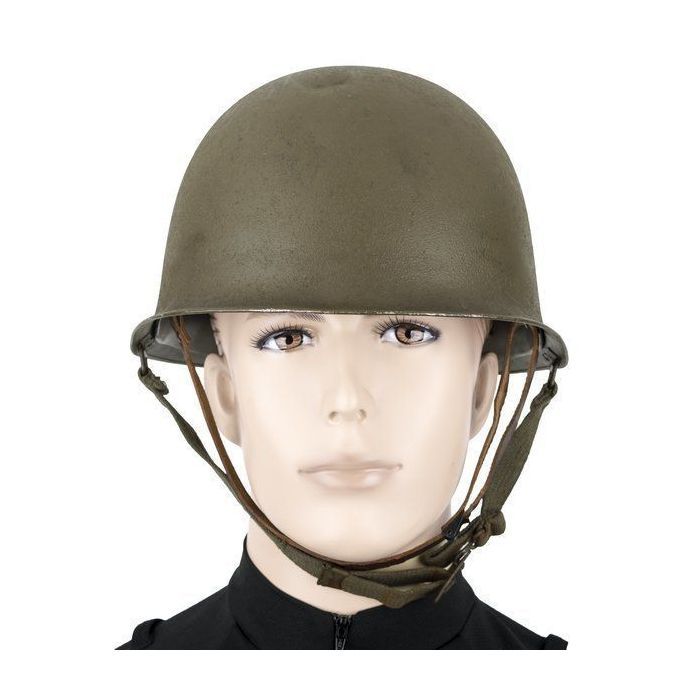 The French Army M51 Helmet is a vintage helmet from France that was used extensively by the French Army. These helmets are designed in a manner that is very similar to the US M1 Helmet in that the helmet is steel but there is a removable liner that is fully adjustable. This style of helmet has proven to be reliable in combat conditions and has the added benefit of being able to fulfill additional roles - i.e. use for collecting water, etc. without damaging the protective capabilities.

We have sorted and examined these M51 Helmets and find dates ranging from the 1950 to the early 1970s. This long service life shows how successful the M51 helmet was as it saw extensive use in important wars like Algeria and the early days in Vietnam. These helmets are a reminder of how large the French empire was and how broadly deployed French forces were to protect and preserve it.

The condition of these M51 Helmets reflects their age and actual use by soldiers in the French Army. Some will have signs of long term storage, there may be dents, but all are perfectly suitable for use today. The helmets with more signs of use should be prized more for their authenticity and collectibility - they were likely worn by solders fighting for France in Algeria and beyond.

Price
Quality
Value
Good Buy
Review by Rick-O 6/21/19
The helmet is in excellent shape. Dated 1954 it looks like it was never issued.
The liner is dated 1965 and well used but serviceable. I can wear it with my Polish gas mask with no problem.
Quality
Price
Value
Great condition
Review by William 10/26/18
My 9 year-old loves his helmet! Nice and with liner.
Quality
Price
Value
Good deal on an interesting helmet
Review by Ross 6/8/17
My helmet was in used condition, with the little dings and scuffs you would expect from military use. The liner has a very crisp 1965 manufacturer's stamp and included it's sweatband. The only disappointment was that the leather chinstrap featured in the stock photo was missing from my helmet, the presence of which was one of the reasons I'd ordered it.
Price
Value
Quality
Rolls around on your head, but good for target practice!
Review by Seth 7/9/16
Maybe I just have a small head, I can never get this style liner to fit right. If you're a DIY sort of soul you can probably sort something out, but as for me?
I like to use these as targets! Fun to test different types of ammo on.