You can learn a lot of things from "Sesame Street." You can learn the alphabet and that "C is for Cookie." You can also learn how to count from a vampire that finds nothing more hilarious than counting. I learned that it ain't easy being green from a famous little frog named Kermit.

"Bein' Green" debuted on "Sesame Street" – not "The Muppet Show" – in 1970. For those who have yet to hear the song that has been performed by everyone from Frank Sinatra to the cast of "Glee," Kermit laments his fuzzy green nature before accepting it with choice lines that include, "It seems you blend in with so many other ordinary things." Green. Ordinary? I beg to differ. And I believe the Heckler & Koch G3 rifle would have something to say about that as well.

The HK G3 went into service in 1959 with the Bundeswehr, or German Armed Forces. Today, a number of different configurations for the rifle exist, but theirs sported a set of olive drab and tropical green furniture that let everyone know there is nothing wrong with being green.

Those who go gaga over green will love Keepshooting.com's new G3 OD buttstock – an original surplus part from Germany manufactured by HK. I am sure I do not need to tell you that the buttstock is the component of a rifle that is held against the shoulder when aiming and firing, but I will anyway. The buttstock on the G3 is especially important because, along with the backplate, it houses the buffer assembly. Each G3 OD buttstock is complete with the recoil rod and spring as well as the buffer assembly.

Whether you are looking to pay tribute to Kermit, build a rifle or dress up your existing G3 in German military-style furniture, the G3 OD buttstock is an excellent way to do it. Grab one today for only $14.95. 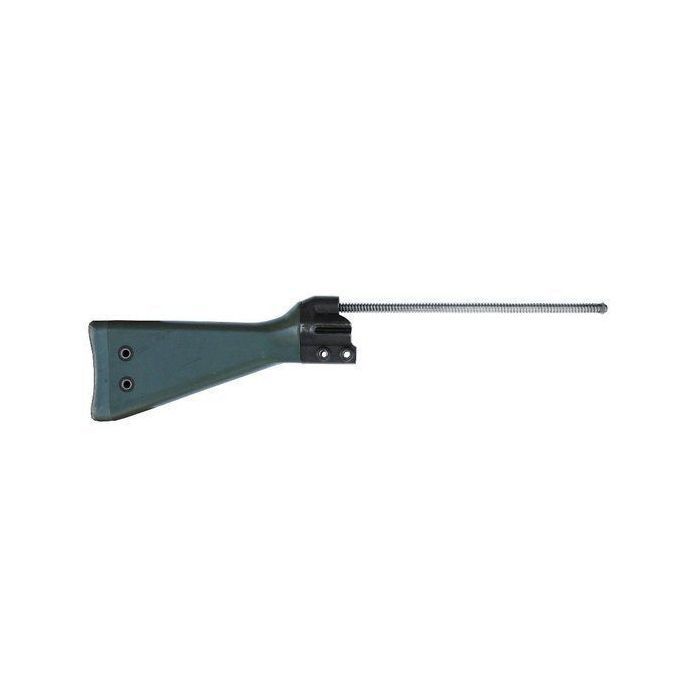 As noted, the G3 OD buttstock is an original factory part made in Germany by HK. They were stripped from service rifles, which means you are not only getting a complete, fully-functional buttstock, but a piece of history as well. This injection molded synthetic buttstock could originally be found on the G3A3 variant. It can be located on the rearmost part of the rifle mounted to the receiver and the trigger pack via the lower locking pins. The buttstock of a rifle is designed to be held against the shoulder during aiming and firing as well as spreading the force of recoil. In the G3, the buffer assembly is located within the buttstock and backplate and serves to reduce the amount of recoil delivered through the buttstock.

Spare parts and accessories are an important consideration when it comes to firearms. Like any machine, firearms rely on a series of parts to function properly. In the case of the G3, the buttstock is necessary for proper functioning as the bolt carrier would fall out of the receiver if it were missing. If a part breaks or fails, a repair or replacement is necessary.

It is also important to consider availability. At this time, Keepshooting.com has a wealth of authentic, original factory parts from HK for the G3/HK91/PTR91. Not only are they readily available, but also they are cheap. Those with an interest or need for any of the parts and accessories offered should realize that now is the time to take advantage of this offering.

Reviews 6
Write Your Own Review
Only registered users can write reviews. Please Sign in or create an account
Product Questions
Customer Questions
No Questions
We found other products you might like!
Copyright © 2002-present United Defense LLC. All rights reserved.