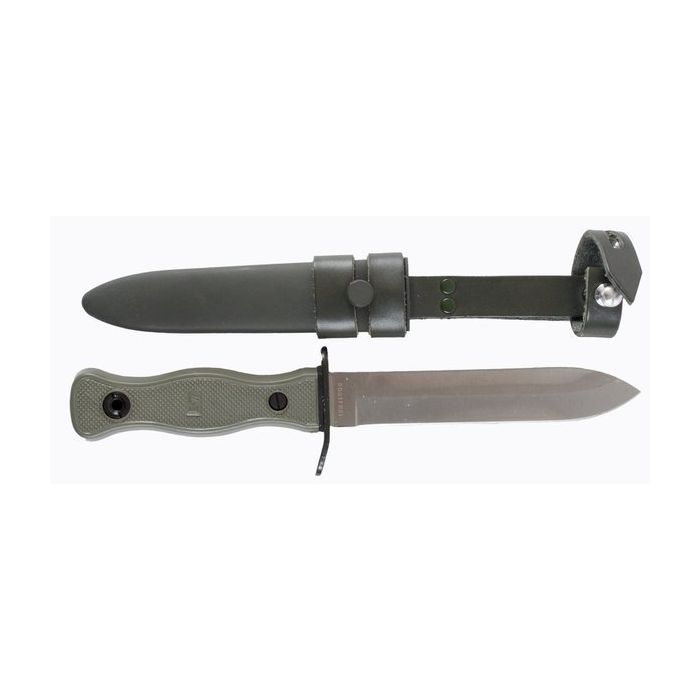 The German Army Combat Knife is a brand new military knife that is currently issued in the German Armed Forces. This knife has been in use by both the German and Austrian army for over two decades and soldiers have raved about their performance in combat.

Notify me when this product is in stock
SKU GACK

The German Army, known as the Bundeswehr, has used this combat deployed fighting knife for over two decades. The track record of stellar performance of this knife in combat conditions speaks volumes to the simply design and rugged materials used in the manufacturing process. Many knife collectors enjoy adding combat knives to their collections, now you can add an authentic German Army Combat Knife to yours.

Price
Value
Quality
Good Tough Knife
Review by Darris 1/6/15
Just received the German Army Combat knife (Jan 3rd, 2015). It arrived a little dull but it was sharpened fairly easy (hardness about 56 RC). The handles are plastic not steel which is good for where I live. I live in Alaska and metal freezes to your hand below 30 degrees.

All in all a good knife at a good price. I have seen this same German Army Combat knife for more. This is a great cold weather knife where you don't want super steels that may be too brittle.
Value
Quality
Price
Excellent Knife. Brand spankin new. Exactly as described.
Review by MMADD 1/3/15
I picked up this knife yesterday because I've had my eye on this particular style of blade for a while. It is very hard to find this style elsewhere. I took her out of the box and I was wowed at the perfect size and overall quality of this combat knife. It came razor sharp and shiny. It is exactly as described and you can always expect quality when ordering Bundeswehr grade products. The sheath fits nice and tight and it is perfect for just every day carry on your belt or maybe even in your boot. Very very solid for this knife. Well worth every penny. The folks at keepshooting always know quality and good prices. Very friendly and professional and have never had a problem buying from them. One of the finest online surplus stores located in the beautiful state of Maryland.