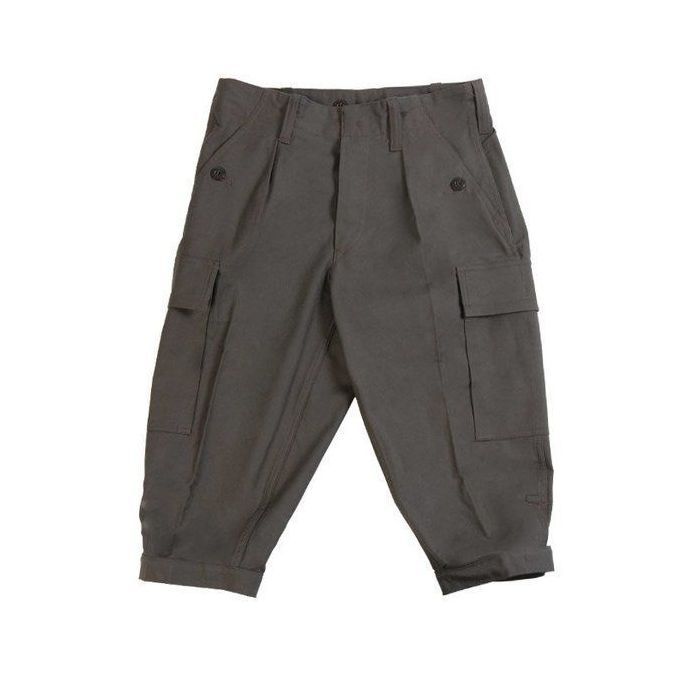 We've just received a small lot of original German Army Moleskin Knickers. These are in really great condition, we'd rate them as being surplus unissued. If you're not familiar with moleskin this was the standard material of the German army uniforms from 1960 to 1990.

Notify me when this product is in stock
SKU GAMK

Achtung! Get yourself a pair of these authentic German Army Moleskin Knickers. From 1960 to 1990 this was the standard issue military pants for summer months in the West German Army.

Overall Rating
Excellent hiking/summertime knickerbockers
Review by CC 7/7/16
These are, without a doubt, 29-30" waist. Excellent fit for me at 6'/150lbs, they seem to be in brand new condition, and they are marvelously comfortable.

If you wear an honest 29-30" or smaller, not a "vanity size" number untrue to reality, try these out. I've seen knickerbockers cost many times this amount, but I have yet to see any nicer.

The one sticking point is that the photo makes them appear grey. They're practically OD green, so that's what to expect. It makes little difference to me, but some folks might be after a particular color.
Overall Rating
It is a SMALL
Review by Marianne 11/30/14
So, I love these knickers. I mean, I was so excited to receive them in the mail, but at 5' 4" and about 145 lbs with a pear shaped body, these are not the knickers for me. When someone says a 29-30 inch waist, I'm thinking more 27-28.

These are exceptionally well made, but I WISH they came in a slighter larger size. I would LOVE to be wearing them. It makes me sad that I gave them away.
Overall Rating
Great cycling pants
Review by Michael 9/10/14
I live in South FL, which means that it's hot all year round -- incidentally, I also ride a bicycle everywhere. If you cycle enough, you come to realize that normal-length pants present a problem. They tend to get caught and torn in the gear rings.

The option is to either roll them up and down every time one rides, or wear shorts. I was never satisfied with either option, and kind of liked the way pants that ended halfway up the calf looked. So I picked up some Italian army knickers from the Sportsman's Guide. They were really nice, and I liked them a lot; the right size, good material, generous pockets that had a flap which buttoned closed, etc. The only problem is; they're made of wool. I live in South Florida, remember?

So fast forward to now, and I buy these. Wasn't sure what to expect, but I was extremely pleased upon receiving them (probably more so than I've ever been with online clothing purchases). The size is perfect for me (definitely a size 29-30 waist. Sorry big guys), the pockets are well sized, and even though the side pockets don't have a protective flap like the Italian ones, they do button closed (which means that your cellphone and wallet won't fall out when riding). In addition to that, there are also six vent holes on the underside of the pants, right around your taint. In addition to the material being a fairly thin but durable cotton, this means that the knickers have good ventilation for warm-weather wearing.

Lastly, the material is more of a dull green in my opinion than the grey it appears in the pictures. I actually like it much better.

I would say that there are only two problems with these. The first is that the cargo pockets use buttons recessed under the flap instead of velcro, which means easy AND secure access is a burden. The pants also don't use a zipper, but as pictured, have button-up flies. This is kind of a pain in the butt when you decide to go urinate. But after extended wearing, it should loosen up the button-holes to make it a very fast and simple process.
Overall Rating
Knickers = over the knee shorts.
Review by Frank 3/16/14
Just in case you're wondering.

Knees. I don't know any word in the English language that is used to commonly complement their appearance, but several to denigrate them. Knees are knobby, knock and weak; rarely does someone say "he has really strong knees." If one has scars or other negative traits, covering them is a good answer.

I bought these primarily to make my wife laugh, especially after getting the East German Breeches, but in fact I sort of like them.

Gr1 size comes out to a 29 or 30 inch waist, for those like me that wondered what passes for small in Germany. It's non-adjustable.

The legs themselves run just below the knee and cinch around using a velcro strap. The cargo pockets are okay, but don't really balloon enough to carry much in them.

The nice thing about these shorts is that when working outside on stuff one can take a knee and get dirt on the trousers versus one's knees; little pebbles, sticks, and stuff hurt less, too. Plus one can still show off their awesome calf muscles.