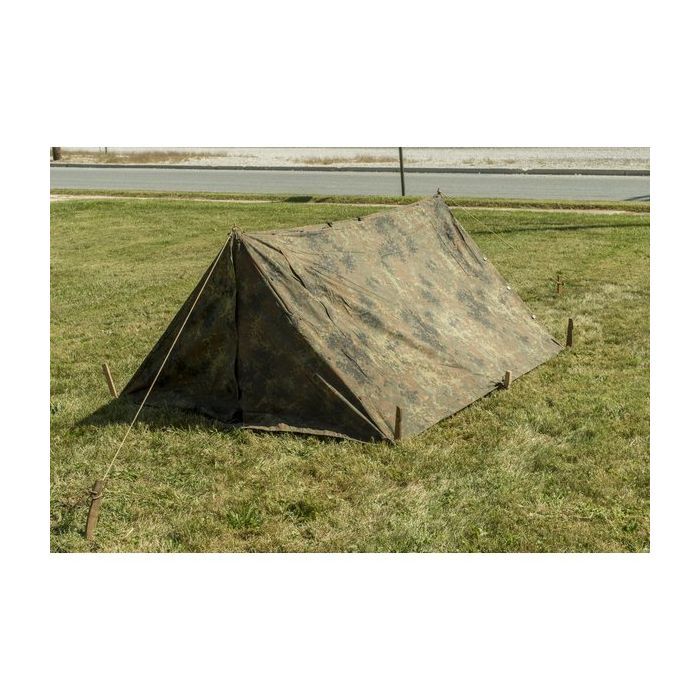 The German Army Pup Tent is a two-man tent made by connecting the standard issue German army shelter half that doubles as a rain poncho. Each tent comes complete with both shelter halves, six individual wooden tent pole pieces, eight tent stakes, and two guy lines. You have the option of using one of the shelter halves as a poncho or you can assemble both into the pup tent you see pictured. Everything necessary to assemble the tent is included with your purchase.

The German Army Pup Tent is based on the proven shelter half based design that has been used by countless military forces for decades. Each soldier would be issued their own shelter half which contains the shelter half and one half of the components necessary to assemble a tent.

While on patrol the individual soldier could wear his shelter half as a rain poncho during the waking hours and at night pair up with a buddy and construct this 2-man pup tent. This proven design has been used by military forces in the United States, Germany, England, and Austria for decades and has been shown to be the ideal design for a small 2-man tent.

Overall Rating
It's a Keeper!
Review by Les 9/3/16
Both halves were previously issued but in excellent condition; one even had a message from the previous owner written in chalk on the inside. I'll need to add a few stitches because the button holes are a little loose and I wish the tent poles fit in the bag but other than that, pretty pleased with the setup.
Overall Rating
good piece of survival gear
Review by don 4/14/16
Shelter half like this have a lot of uses for prepper s or hunters. Some people are griping about the rope and stakes it comes with, probably never were a grunt, who improvises in the field. the lines would be replaced with 550 cord and the stakes with.aluminum or field made with branches. you can use it as a poncho, or configure it lots of ways as a camo blind and rain cover over your position.
Overall Rating
UPDATE - Nice Pup Tent, But!
Review by William 1/14/16
Thought I would give an update on my previous review.
I contacted KS about the unusable tent half and they sent me another one. Thank you KS.
The only issue with the replacement was a tear in a non-critical area that was easy to fix. I now have a usable Flecktarn tent.
I also have figured out how to configure it as a poncho.
Again, thank you KS.
Overall Rating
Nice Pup Tent, But!
Review by William 12/11/15
As a pup tent it is nice. But the one I received has some problems. One half shelter was fine, the other had four serious tears, three near tie down grommets. The stakes were made form rough cut wood of various thicknesses and roughly cut out. Doesn't seem like German quality to me. The tie down line, what there was of it, was shinny plastic coated rope. This is clothesline, available at any hardware store and hard to tie a knot in. There was included two lengths of tie down line with wiped ends.

As a side note: The tent is intended to be used as a poncho with the carry pouch attached as a hood. How this is accomplished I haven't figured out yet.
Overall Rating
Grandson and I set this up..OMG
Review by Don 10/1/15
I received my complete German pup today (3 days after I ordered it) Well its complete . My grandson wanted to put it up now. .Slight Drizzle and rain didn't matter . And we did, I don't know if the Germans ever had to set up a pup tent with a 7 year old but it was the most fun I've had in quite a while. Now he wants me to sleep in it with him. Thank you KS. for the cheapest fun I've had in years.
Overall Rating
Excellent Shelter Tent
Review by Jedediah the Gyro Captain 10/1/15
Excellent Bundeswehr pup tent, in the classic Flecktarn pattern! A few random details...

A) The set I received was issued, but was apparently issued to a pogue who never went to the field--my set was mint!

B) The poles are the wood-and-metal WWII style. I've seen the poles go for 5-6 dollars each on other sites, since WWII reenactors use them. Since 6 poles come with this set, that's worth the price right there.

C) The tent pegs are the old-school wooden type. Again, perfect for reenacting any historic period from the 1700's through the 1940's.

D) My set came with two types of guy rope: an old style rope with whip-corded ends, and a newer style rope that was rubber coated. One cool thing is that Keep Shooting included an extra guy line.

E) Each shelter 1/2 stores flat in its own bag--much better than the we had in the US Army, where we had to roll the thing up and carry it on the top of our rucks.