You have probably noticed our surplus of Flecktarn surplus. Well, add another piece to the list, because the German Flecktarn mittens are here.  Each pair of German Flecktarn mittens is a piece of authentic German military surplus. But more than that, they are fleece-lined, heavy-duty mittens with a tough layer of leatherette to ensure that they help you get the job done, whatever that may be. 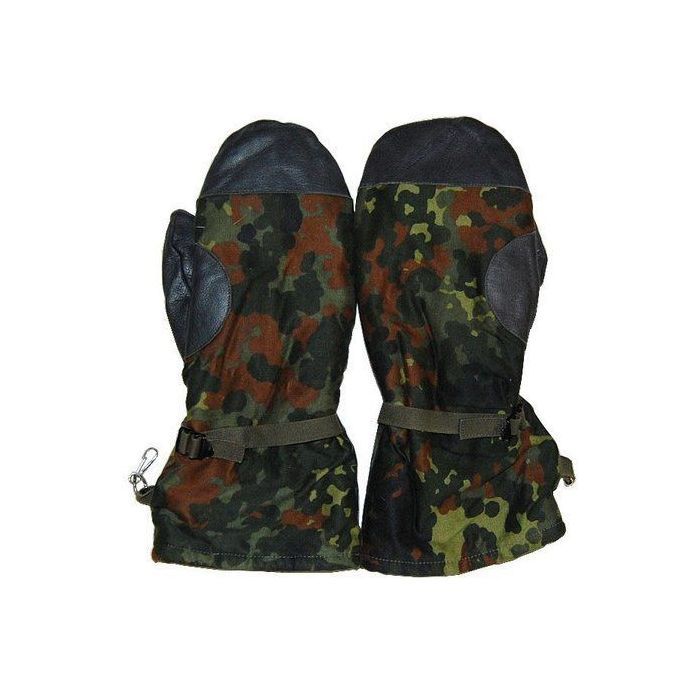 As noted, each pair of German Flecktarn mittens offered by Keepshooting.com is a German military surplus item. The mittens were originally designed for and used by service men and women enlisted in the German heer, or army, which is one of the five service branches that makes up the Bundeswehr, or unified armed forces of Germany.

Though we cannot confirm the issuance of each pair of mittens, they appear to be unissued and remain in excellent condition, far from the end of their service lives. Many of the mittens even appear to be brand new and show no signs of wear whatsoever – save the worn look likely a result of their years' worth of storage. Nevertheless, those seeking an inexpensive alternative to designer gloves that provide excellent protection and extreme warmth need look no further than our German Flecktarn mittens.

Upon receiving the mittens, you are sure to notice their military-grade craftsmanship. Each pair of mittens features a triple-layer construction, with an outer shell that is fashioned from a cotton/polyester blend, a soft inner lining made from fleece and a Gore-Tex® membrane sandwiched in between. Together, these three layers provide for enhanced warmth as well as a mitten that is simultaneously water resistant and breathable. The real draw, however, is not in their warmth or breathability, but rather the inclusion of a protective layer of leatherette on the areas that are most vulnerable to wear and injury. The palm of each mitten, along with the entire thumb and fingertips, has an added layer of leatherette to protect the most sensitive parts of the hand from dangerous elements that may be encountered during various types of labor. Additionally, each mitten includes an adjustment strap at the wrist and even extends several inches past the wrist for increased protection of the lower forearms. Another interesting feature is the inclusion of locking clasp that ensures you will never be searching for a single missing mitten.

Reviews 2
Write Your Own Review
We found other products you might like!
Copyright © 2002-present United Defense LLC. All rights reserved.