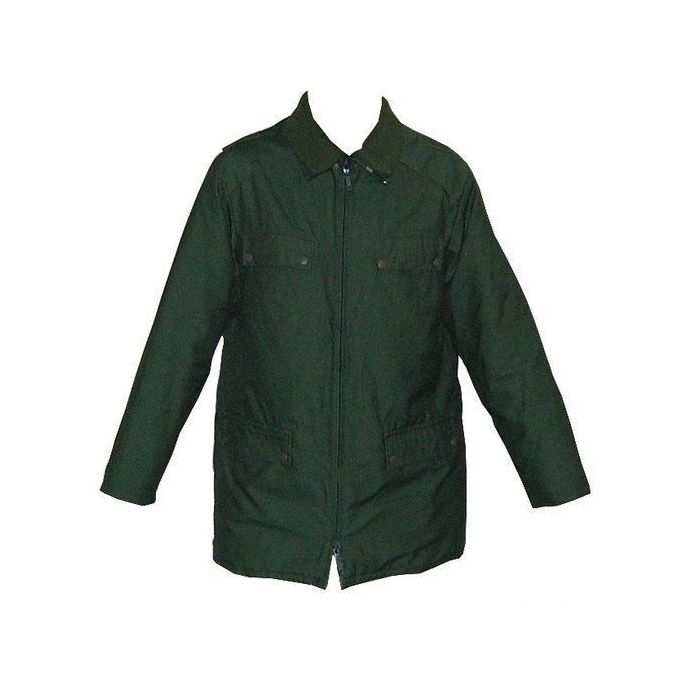 4.75 4 (4)
The German military jacket is the newest product available from your favorite online, surplus retailer. Perfect for chilly autumn evenings and blistering cold winter nights, the German military jacket offers comfort, durability and a slew of practical features that make it one the best jackets in our web store. Not to mention, it is very affordable.

Each German military jacket offered by Keepshooting.com is an authentic piece of German military surplus. These jackets were once pieces of standard-issue clothing and were originally designed for and issued to service men enlisted in the German heer, or army, which is one of the five service branches that make up the Bundeswehr, otherwise known as the unified armed forces of Germany.

Though we are unable to confirm issuance of these German military jackets, each appears to remain in great condition, requiring nothing more than a quick laundering and still fully capable of providing prospective buyers with years of service stateside. Likewise, these jackets are free from the typical rips, tears, stains and scents that often plague previously issued military surplus clothing. Those looking for a unique piece of German military history or a versatile, all-around jacket suitable for multi-season use should definitely give the German military jacket a look or two.

Heavier than a windbreaker but not quite a parka, our German military jacket is, as noted, a versatile jacket that is suitable for multi-season use. Boasting a cotton/polyester blend that offers comfort and durability alongside a score of practical features, the German military jacket is one that commands attention. It is secured via a traditional full-length zipper, but that is where traditional form stops and function cuts in. A removable rib-knit collar adorns the jacket and offers warmth for the wearer's neck. Those who prefer a hood, however, will love the stowaway hood housed within a small zippered pouch at the base of the neck. Of course, with the German military jacket, not everything is about warmth. The jacket also includes four underarm vents to offer a slight cooling effect where too much warmth may prove uncomfortable. Then there are the pockets. Four interior pockets (two at the breast and two at the waist) are joined by four exterior pockets (two at the breast and two at the waist), offering ample storage space for wallets, cellphones and other accessories. 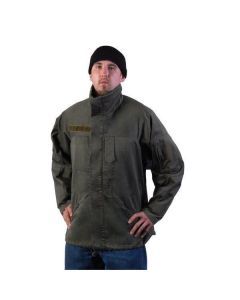 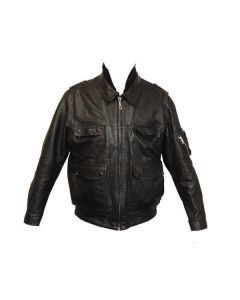 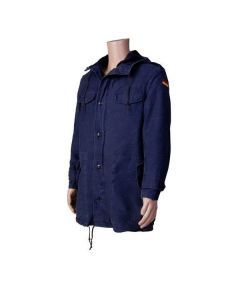 Overall Rating
I got the last in the barrel
Review by Craig Channel Islands Harbor 2/5/16
Verified Buyer
The jacket I received appears to have been issued and worn. The KS description says the are no rips or tears. The front outer-shell above the lower pockets have several fabric nicks and 1 tear about 1/4 inch that will need to be darned. Both exterior breast pockets have had the fabric liner bottoms crudely cut/torn requiring repairing to have functioning pockets. The interior liner has a large amount of pilling maybe from the rubbing of a solder's duty belt holster. I discount the customer(s) statement the liner is Gore-Tex. the label from 1985 says the liner is Polymid/Polyester. Maybe mine is a different run but just know that Gore-Tex requires all seams to be taped; this jacket has no taped seams- none. NOW... I do like the jacket. I am 5'7" 195 lbs and the fit is roomy just a bit tight in the shoulders. Sleeve length is OK. The hidden hood is nice and made of the outer shell material. All the zippers are functioning except the lower half of the main zipper is missing the pull tab. There is a faint stitched outline on the left upper sleeve where a military insignia was attached. I expect it will serve me well in the chilly coastal mornings and nights. If you conceal carry the right lower pocket pass-thru will come in handy when the front is zipped up..
Overall Rating
Another Superb Jacket From Keep Shooting-And An Exceptional Price
Review by Jonathan 3/10/15
Verified Buyer
This is a stellar jacket. There is a very warm, non-removable liner, with a Gore-Tex inner membrane, and the detachable knitted collar removes to reveal a "standard" collar. This is simply an excellent jacket, and the color and styling doesn't shout "GI Joe/Mall Ninja." The lower right front faux pocket pass-through is a neat feature-that way I don't have to be interminably transferring pants pocket contents (like keys, etc.) to the jacket, and vice-versa.

I'm 5'8", 190 lbs, and the fit is "right there." With a heavy sweater added, it's do-able, but a bit tight, but without a sweater, or with a light one, it's just fine. Realistically, with the canvas weave and liner, it's not as if you really need much else, I'd estimate, until encountering sub-zero temperatures. Mine has adjustable liner collar cuffs, and underarm vent holes, and a two-way zipper (a very nice feature for extended days in the field). Mine appeared to be unused, and possibly unissued.

I'm thinking that this will be an excellent late fall/winter/early spring coat.

Overall Rating
Monster jacket at midget price.
Review by Jim K. 1/25/15
Verified Buyer
This thing is great, quilted lining, and not mentioned in the description, gore-tex lined too, says so right on the tag! Heavier than the KS description would lead you to believe. i wear a 42 chest usually, and this fits okay, big with room, but not sloppy. Cool hidden hood, and removable, ( for laundering?) collar. I could find no evidence of the arm vents mentioned in the description, and another thing, somewhat quirky, the RH bottom pocket is a pass through pocket, so for the first week of wear, my keys hit the ground as many times as the bucks this jacket cost!, so that is the only "issue". I'd like to hear an explanation for that feature. to get to their pistol?, mag pouch? keys?, anyone know? I'm contemplating eventually making a pocket pouch for that baby, but more important things are ahead in line. You can see the outline of the army patch on the arm, but other than that, this is like new. i liked it enough to order another, because pocket or not, it's a huge amount of warm jacket for the money, and the color is very nice as well. Get one, schnell!
Overall Rating
Great condition and very warm
Review by Rob 8/20/14
Verified Buyer
I got this jacket and was surprised that it was such good condition! It was like it was never used. You can't beat this jacket for what it gives you for the price. If you want to stay warm and don't want to drop a paycheck then I recommend getting this today!