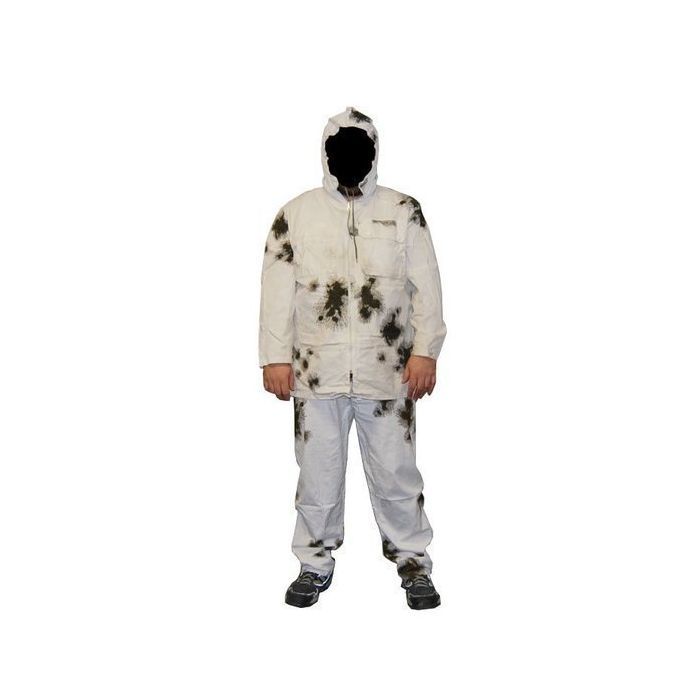 The German military snow camo suit is a two-piece suit that consists of a jacket and pants and is designed for use as an outer layer in cold, wet conditions.

Notify me when this product is in stock
SKU GMSCS

As noted, each German military snow camo suit offered by Keepshooting.com is an authentic German military surplus item. These suits, which consist of a jacket and pants, were originally designed for and used by service men and women enlisted in the German heer, or army, which is one of the five service branches that makes up the Bundeswehr, or unified armed forces of Germany.

Sold to us as used, these German military snow camo suits remain in good condition, far from the end of their service lives. As such, they remain free from the typical rips, tears and scents that are characteristic of previously issued military surplus clothing. Some, however, may have machine-washable stains from use or storage. Those looking for a comfortable outer layer during the winter months will find the German military snow camo suit an excellent option.

Constructed from a durable nylon blend, the German military snow camo suit is a two-piece suit that pairs a lightweight jacket with a pair or lightweight pants, or over trousers. Both pieces are very simple in design. The jacket, which features an integral drawstring hood, boasts a full-zip front for closure.  Additional features include snap-fastener cuffs and two snap-fastener pockets – one on exterior of the left breast and one on the interior of the right breast. The pants, or over trousers, are also designed for use as an outer layer and feature a set of button-adjustable, elastic suspenders as well as a cotton drawstring. Additional features include zippered pass-thru pockets and zippered cuffs.

Undoubtedly, you have also noticed the unique camouflage pattern on the suit. Officially known as schneetarn, or "snow camouflage," this pattern was originally developed for use with the Bundeswehr during the 1960s as a general purpose pattern for soldiers serving in snowy environments. Marked by its dark green needle-like swaths on a snow white base, schneetarn is still in use today.

There is one final noteworthy aspect regarding the German military snow camo suit, and it is the fact that the NATO Stock Number (NSN) is printed on each component of the suit. An NSN is a 13-digit numerical code that identifies all standardized materials of supply that are recognized by NATO countries. The NSN for the jacket is 8415-12-162-1322, which identifies it as a schneetarn anorak, or "snow camouflage anorak." The "8415" identifies it as a piece of special purpose clothing while the "12" signifies that the piece is from Germany. The remaining digits are an item number. Similarly, the NSN for the pants is 8415-12-162-1318, which identifies it as schneetarn hose, or "snow camouflage pants."

The German military snow camo suit is an excellent choice for: