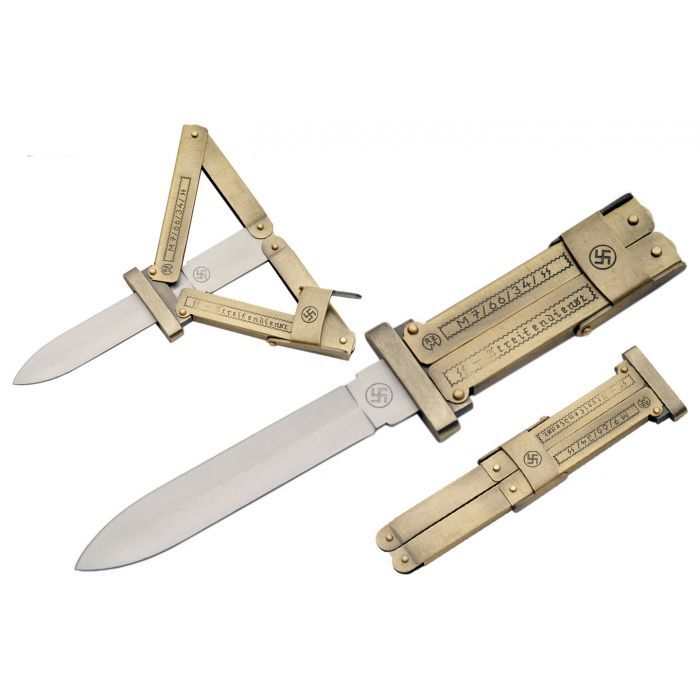 The German Paratrooper Knife is a reproduction of the original World War II era paratrooper knife. Parachute troops in the German Army were issued this knife to allow them to deal with situations after dropping that may require a one handed knife. This would include being stuck in trees, having one arm tangled up in parachute cord, or any other situation. Every detail has been reproduced from the original and can be seen in this knife, including the markings on both the handle and the blade.

There have been many different versions of paratrooper knives since paratroops have become part of armed forces. The German Army designed this special purpose paratrooper knife that was used extensively during World War II. Having similarities between the balisong, this knife was purpose built to allow a solder to open it with one hand to deal with any situation after deploying from their airplane. When not in use, the blade stays stored in the handle to prevent any accidents that could happen with an exposed blade during a parachute drop.

With a vintage appearance from the brass handle, this knife could be used for display purposes in a historical room. There is no defined model that this knife is a reproduction of with most information pointing to an Eichorn design. The knife is an interesting piece and could help round out a collection of German-era knives.

Overall Rating
Paratroopers knife
Review by Eric Rohrer 10/4/21
I'm glad that this knife was back in stock.I really enjoy this knife!!Call it German Engineering or whatever,this is purely German.It must be a bitch cutting your parachute upside down from entangled tree limbs,but,at least they were thought of.Who knows how many pilots were saved.Even if it did help or not,we got a cool knife(replica) which I enjoy today& love showing it off to friends.5stars.Eric Rohrer.
Overall Rating
Knife
Review by Jenny 74 7/3/21
Neat to look at and definitely different! Not the best quality but still cool to have!
Overall Rating
Strange little knife.
Review by April 12/8/16
This knife is a little loose as are most things made in China, will make a great little letter opener .
Overall Rating
Cool knife for the price
Review by Michael 10/26/16
This knife isnt heirloom quality, but it is interesting to have.
Overall Rating
Pretty cool
Review by Greg 4/19/16
Kind of flimsy, also be aware that the blade is not sharp at all. All in all pretty good price for a unique trinket.
Overall Rating
Interesting.
Review by SGT SURVIVAL 12/8/15
A lot smaller than I expected. But, never having seen an original, I had nothing to compare it to. Can't see how this design was developed to make one-handed opening easier. This gizmo is like a Chinese puzzle box. But still an interesting knife.