Finally, Apocalypse Watch 2012 has come back to Keepshooting.com. I know you have all been clamoring for another installment, so here it is. Well, April is but days away and if you happen to believe those silly Mayans, we have only about 9 months left to live. I do not have much to report on my end other than clear, sunny skies and warm, breezy afternoons, although there was that string of earthquakes last week in North America – probably just a coincidence. I mean, what are the chances of an Earth-shattering earthquake sentencing civilization to doom? I would guess that they are not very high, but that does not mean we cannot speculate.

If you are a prepper, you probably have some sort of bug-out plan concocted to get you and your loved ones through the end of the world. But does your plan include provisions for a ground-shaking, world-breaking earthquake – one that could wipe out the world as we know it? That could really throw some wrenches into your carefully-devised plans. How about I throw in the stipulation that you are unable to drive and you only have time to grab a single pre-packed bag? How will you ever survive? I am willing to bet it would be a little easier if your bag happened to hold the Henry survival rifle.

The Henry survival rifle comes with two 8-round magazines and is available in both black and camouflage and starts at $234.83 – do not let the end of the world sneak up on you without one. 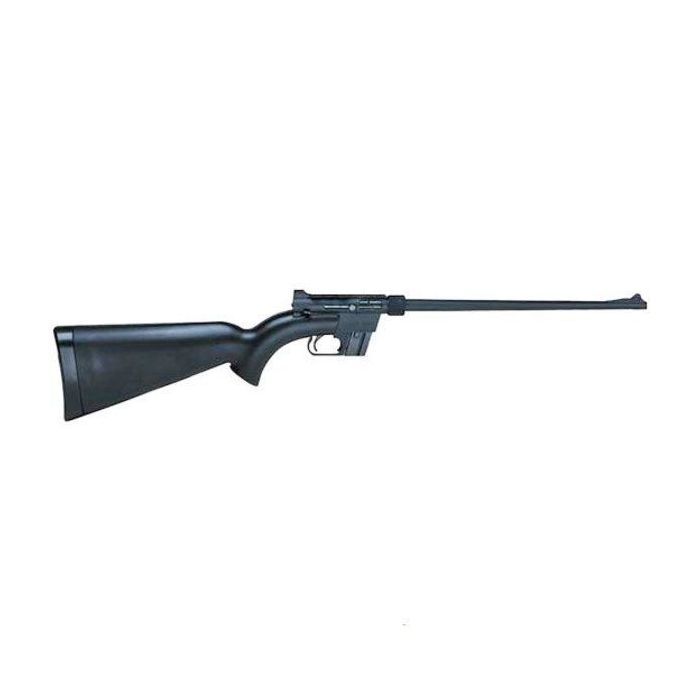 The Henry survival rifle, also known as the AR-7, is a modified version of the original AR-7 designed by Eugene Stoner. You may recognize Mr. Stoner as the designer of the AR-15 as well. He must have been a very busy man. Anyway, the AR-7 was originally designed in 1958 before seeing production in 1959. The rifle was based on the AR-5 – a bolt-action rifle chambered in .22 Hornet adopted by the United States Air Force as a survival rifle for pilots. It is now marketed as a survival rifle for outdoorsmen and preppers everywhere who may need a weapon for hunting small-game as well as defense. The most notable difference between the AR-5 and the AR-7 is that the AR-7 is a semi-automatic rifle chambered in .22LR. That being said let us talk about exactly what the Henry survival rifle has to offer.

As noted, the Henry survival rifle is a semi-automatic rifle chambered in .22LR. It utilizes a blowback system of operation. Though this aspect is completely different from the AR-5 that the rifle was originally based on, the Henry survival rifle maintains its unique ability to be broken down into four components, three of which fit inside the stock (the fourth component). The first component we will discuss is the barrel. The Henry survival rifle features a steel barrel that has been covered in ABS thermoplastic as well as coated in Teflon® to provide guaranteed protection from rust and corrosion. Additionally, it provides the accuracy you have come to expect from a semi-automatic rifle chambered in .22LR. Next up is the receiver, which is also coated in a thin layer of Teflon® to provide protection against the elements. You may also be delighted to hear that all receivers on the Henry survival rifle now include a 3/8-inch rail milled directly into the top, which provides for a wide range of optics and accessories. The third component is the 8-round magazine, of which there are two. Finally, we come to the fourth and final component – the stock.  Constructed entirely of ABS thermoplastic, the stock is the real selling point here. When fully disassembled, all other components of the rifle fit neatly within the stock, making it highly portable. Not only is it highly-portable, it is impact resistant and waterproof as well, which makes it perfectly suited to the outdoors and emergency environments.

The Henry survival rifle is both assembled and disassembled very easily with both processes taking no more than one minute. There are no tools required. When fully assembled, the rifle measures approximately 35 inches long. Once the rifle is broken down and all components have been stored within the stock, the length drops to just 16.5 inches. The overall weight of the rifle is a meager 3.5 pounds. There is an adjustable rear sight in addition to the blade front sight.