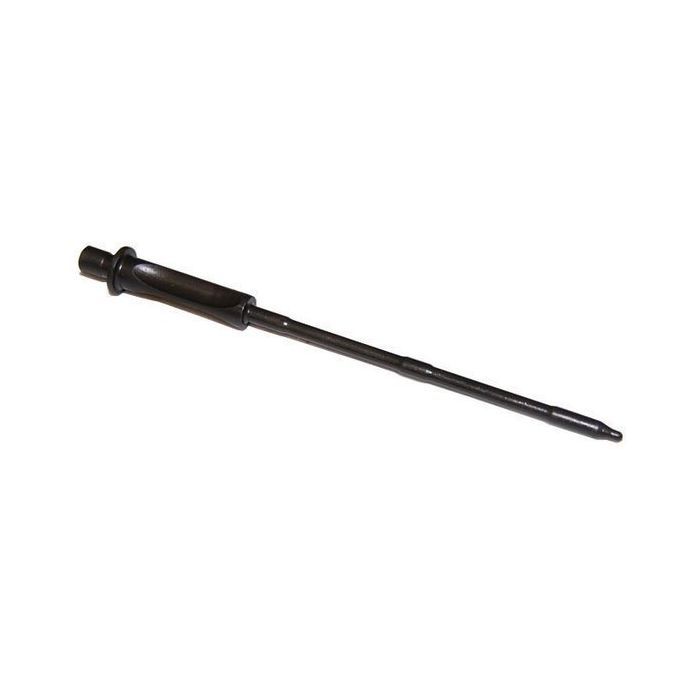 The only time the word bad should be anywhere near the words Heckler & Koch G3 in a sentence is when you are describing a dysfunctional G3 that has been put out of commission in some way. If that does not speak to my admiration of one of the world's finest battle rifles, then I do not know what will. Just thinking about a poor, broken G3 is making me teary eyed.

The G3 firing pin is a steel pin that is located in the bolt of the G3. As part of the firing mechanism, the firing pin is responsible for transferring energy from the hammer to the primer of a cartridge. When the hammer strikes the firing pin, it will jolt forward and in turn strike the primer, which serves to ignite the propellant gases in a cartridge and send a bullet downrange. This part is absolutely necessary for a successful completion of the firing sequence. It is an original factory part made in Germany by HK.

Spare parts are an important consideration when it comes to any firearm. Like any machine, firearms rely on a series of parts to function properly, especially components of the firing sequence. The firing pin is absolutely one of the most critical parts of a firearm. In general, if a part breaks or fails, a repair or replacement is necessary.

Overall Rating
Very Decent!
Review by Uncle Mike 4/14/17
Mine that I ordered was in excellent condition. True HK Part!
Overall Rating
A Must Have for Every G3/CETME Owner
Review by James 10/19/16
This is as described, its new and appears to come in the original packaging from Germany. Every G3 owner should have at least one spare firing pin around. Also for Cetme owners, the firing pin is one of the few parts that are actually interchangeable with the G3, in fact CETME firing pins are susceptible to breakage and I recommend that the firing pin be replaced with a G3 firing pin to prevent accidental discharges.
Overall Rating
Good for spare parts kit
Review by HK Al 8/14/16
I bought several of these as spare parts. All of them were used, but appear functional.
Overall Rating
Good price but not NIW
Review by Alex 2/22/16
Good deal on a new firing pin. Does not come in factory wrap but looks like new.
Overall Rating
Good Spare
Review by HK Fan 9/18/15
I bought it as a spare. Unlike the review from 2011, my firing pin is used. I recommend HK91 owners to purchase one as a spare.
Overall Rating
original for nearly free
Review by Michael 1/10/14
The firing pin is one part of most firearms that costs a lot more than what you would expect. I expected it to be a bit pricey, but no. Now I have a back up pin for a beast of a rifle that will probably never break one.
Overall Rating
stock
Review by marine 2/21/13
stock up on your replacement parts before they get banned too!
Overall Rating
A+... Pin arrived looking like new
Review by Jeff 2/19/13
There were a couple of finish rubs on the side but it looked like it had never been used.. The tip and hammer end both had 100% finish... Great deal.
Overall Rating
Good deal
Review by Jay 2/16/13
Great find at a great price. Will be picking up another shortly.
Overall Rating
Extra Firing Pins Are A No Brainer!
Review by Rich 2/11/13
On of if not the most important spares you could have is firing pins. I have not received mine yet since I just ordered it, but after reading the other reviews, you can't go wrong with a new pin for the price they are being offered here so I got 2.
Overall Rating
New G3
Review by roy 2/9/13
Got this and others as spares. This appears new and shows quality workmanship. Should last forever but this sale will not.
Overall Rating
good used condition
Review by rodney 1/26/13
G3 Firing pin looks in good and in good condition. Have as a pair since the G3/HK91 parts are pretty much out of production.
Want for a spare. Sealed in heavy clear plastic. I like that.
Overall Rating
Excellent price!
Review by Nato 9/4/12
New HK firing pins at this price is unheard of, will buy some more with my next order!
Overall Rating
must have spare part
Review by dave 11/9/11
again, it's always good to have spare parts and a firing pin is a must. genuine hk for 9 bucks!!!!
Overall Rating
Original Part in Original Package
Review by HK Fanatic 9/5/11
This came in its original foil package. Excellent part at a crazy good price.