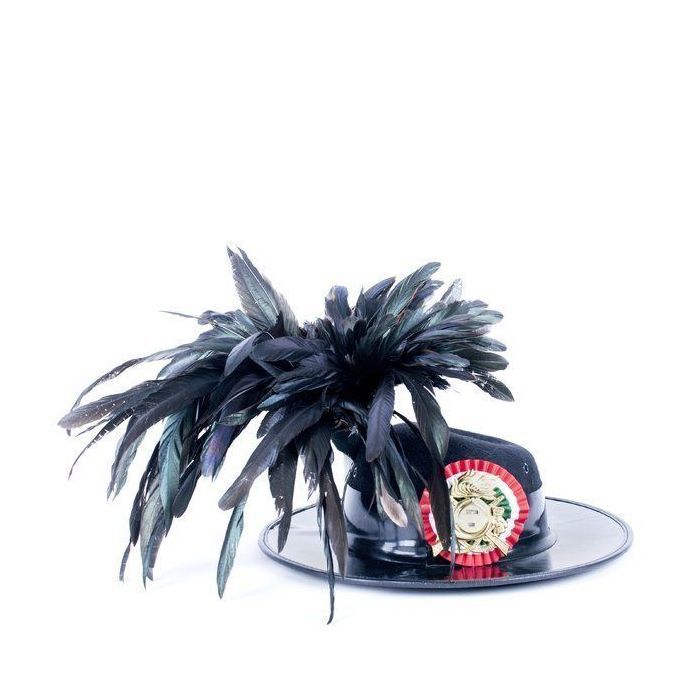 The Italian Army Bersaglieri troops have one of the most interesting histories of any specialized unit in the Italian Army. With a history dating back over 150 years, there are stories about the bravery of the Bersaglieri dating back to their inception. If you are not familiar with the Bersaglieri, they are a highly mobile and quick force that is easily recognized by their faced paced marches. Just how fast are their marches? Even today by standard they march at 180 paces per minute, which is very near running speed for most troops.

The Italian Army Bersaglieri Dress Hat is an authentic unissued dress hat that would have been worn by elite Bersaglieri soldiers in the Italian Army. Recognized by the plume of black feathers that has been the standard of the Bersaglieri, these hats are extremely rare to find in any condition and that much more rare being unissued.

Each of these authentic Bersaglieri Dress Hats comes with the signature wide brimmed black hat, which has an Italian Army contract tag sewn inside. Most of the hats we have examined were part of a 2001 contract that was delivered to the Italian Army but never issued to Bersaglieri troops. Included with each hat is the authentic black plume of wood grouse feathers and the pictured insignia. Once the hat would have been issued to a Bersaglieri their unit number would have been attached to the insignia to show what Bersaglieri unit they are attached to.