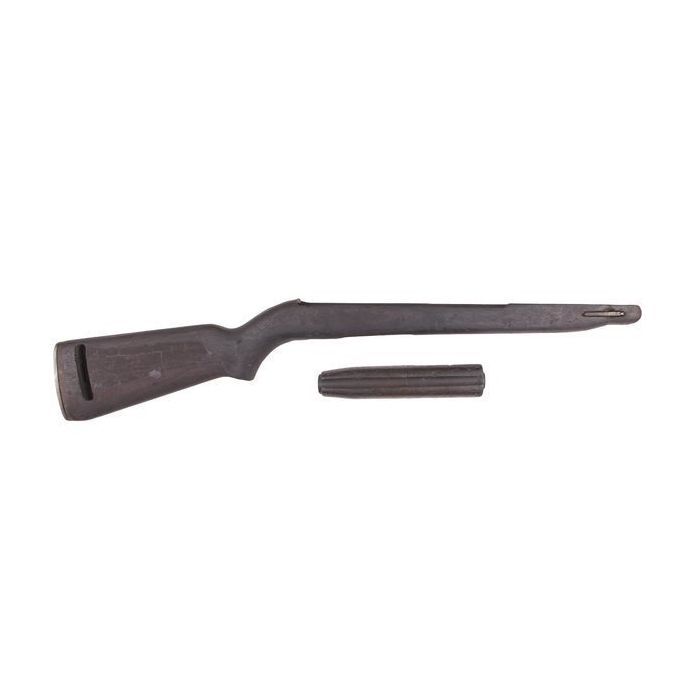 The M1 Carbine Stock is an original USGI wood stock set for the M1 Carbine. These stock sets were removed from their guns at some point by the military due to defects found during inspection. This makes these M1 carbine stocks ideal for restoration projects, where they can be repaired to their original condition with time and effort.

The M1 Carbine has been a favorite among collectors, shooters, and militaria historians since it was first issued. There are legions of fans of this firearm, not just due to its use by the US army, it happens to be a very fun gun to shoot. With the service live of the M1 carbine in the US army being relatively short, there has been no new military M1 Carbines produced for decades.

One of the most satisfying activities you can engage in with the M1 Carbine is to find one that has been neglected and restore it to its original condition. These M1 Carbine Stocks are an excellent way to accomplish this, as they are original USGI wood stocks that were taken from their host guns. When the military inspected their stock of M1 Carbines, they would pull any wood stocks that were not perfect which is the best way to describe these stocks.

Each stock set has some imperfection, yet all can be restored to be like new with time. These imperfections can be scratches, cracks of various sizes, or areas where wood has a rough texture. The important metal parts are all included, which means the only thing these stocks will need is a steady hand with some time to bring them back to their original condition.

Overall Rating
Nice For a Project, But...
Review by Ty 1/18/18
Both stocks I received are missing too much wood to use in a restoration. They're both walnut type III, oval cut, low wood stocks, with bridges, no M2 selector cuts.

No visible stamps except one has a P firing proof and might have an OI in the slingwell.

Both are missing big chunks on the right side by the slide and the one with the smaller chuck missing by the slide is missing a big chunk behind the recoil lug.

One has badly pitted recoil lug, the other has a decent condition Rock-Ola stamped recoil lug.
Overall Rating
A piece of history for not very much
Review by Brendan 1/5/18
I ordered a stock set on Christmas day and received it today. I got a stock and handguard both correct for a proper M1 (No selector cutout and a two rivet handguard). Here is an assessment of what I got:

Stock: I received a Q-RMC (Rock-Ola for Quality Hardware) marked stock that has the crossed cannons cartouche on the right side of the butt. The stock was caked in old grease when I got it, however most of it cleaned off with two rounds of Murphy's Oil Soap. The stocked cleaned up beautifully, however there are three areas of concern. First off, the stock has shrunk considerably. I test fitted the action from my shooter M1 (1943 Saginaw SG), and noticed the trigger group sticks out considerably from the bottom. Usually the stock is flush with the magazine well, however here that is not the case. Another area of concern is that there are two large cracks on the right side of the stock. They are sound thankfully and can be easily repaired. My last area of concern for the stock is that the metal hardware is all frozen in place. However despite these, it is still a good shooter grade stock.

Handguard: I received a Trimble Nurseryland (TN) handguard. I believe these were made for National Postal Meter. The handguard is well worn and there are chips missing from the front of the wood, however it still works. Not much more to say about it to be honest. Cleaned it up the same way as the stock without a hitch. I plan to give the wood a coat or two of linseed oil eventually.

Overall: These stocks are pieces of history and should make for a solid stock for a shooter grade rifle. If I were to purchase one again, I would do it gladly.
Overall Rating
Great value
Review by Cody 9/25/17
The stock came exactly as described. The only defect on mine was that it had the toe busted off, which shouldn't be a big deal If I can find a good wood worker. Other than that it was in pretty good condition. They are pretty beat up, but I don't mind.
Overall Rating
Great Price, and love the challenge
Review by Shane 12/19/16
The stock is exactly as described, they're old, dirty, some cracks and dings but overall good. If you enjoy a challenge of restoration these are perfect. They're not expensive and with some love and elbow grease they'll be a great item.
Overall Rating
M1 Carbine Interchangability
Review by Mark 11/2/16
Genuine WWII stocks with manufacture marks that I ordered sepretly one was pretty good and the other had mild crack at the bridge and recoil plate. The 4 rivet Hand Guard on both seem to be replacements for the original 2 rivet thin wood that most likely broke apart early in the war. The cross cannon cartouche on both are very worn one more than the other but are under all that grease and dirt none the less. The M2 stocks also for sale here seem to have the older 2 rivet hand guards that match the M1 stocks a bit better. After ordering 3 M2 stocks and 2 M1 stocks they match up pretty well and really look nice. Be prepared for some interesting challenges with tight screws, cracked or very dirty dry wood. None the less these stocks are part of American History, not very expensive and very thirsty for numerous boiled linseed oil treatments.