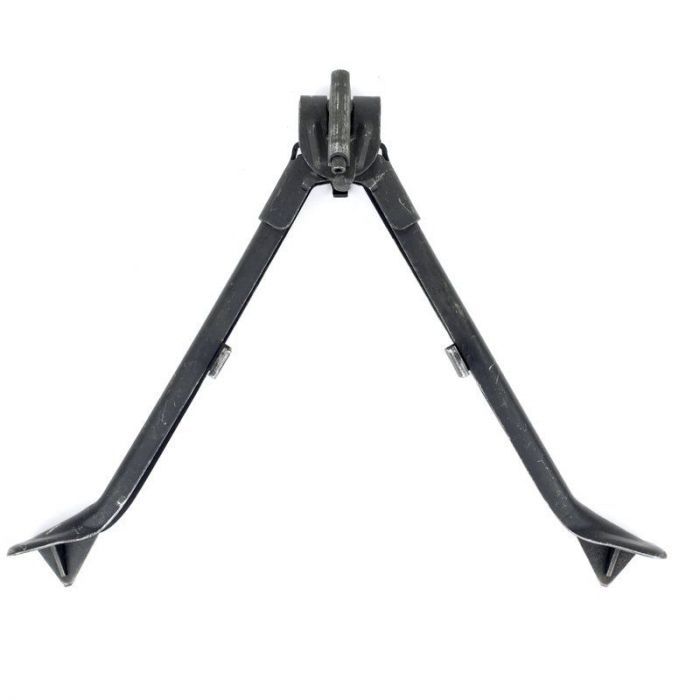 The MG-3 Bipod is an authentic German army bipod that was designed to support the weight of the German MG-3 machine gun. With the German MG-3 being directly based on the WWII-era MG-42 this bipod will fit either the MG-42 or the MG-3. These bipods are of a quick detach design and can be easily folded and stored when not in use.

Notify me when this product is in stock
SKU MG42BIPOD

The MG-3 bipod is a heavy duty all-steel bipod that is designed to withstand full auto fire from the MG-3 heavy machine gun. With the rate of fire, recoil impulse, and sustained fire role of the MG-3 you can be sure that this bipod is built tough. What makes this bipod particularly interesting is it will also fit the MG-42 or Yugo M-53 as all three firearms are based on the same World War II designed MG-42.

We have all original MG-3 bipods that come direct from the German Army with each being suitable for use with your MG-42 style firearm. These bipods are great for supporting the weight of these heavy duty firearms. With this design, you could easily adapt this bipod to fit a variety of other firearms that are heavy in weight and need a well engineered bipod for stability and support.

Overall Rating
A great find on "Black Friday"
Review by Ross 12/6/16
I picked up one of these MG3 Bipods during the 2016 "Black Friday" Sale. First off, I very much appreciate that this was mailed with a small wire "lock" around the clamps that extend up into the Jacket. This kept the bipod from deploying in transit, and is so well done that I will probably keep it on for storage as well.

I would rate my example as being in Used, Good to Very Good Condition. There is the expected finish loss around the points where the bipod is connected to the Barrel Jacket, along with a band of wear and slight marks closer towards the "feet." It doesn't look like this example was deployed in the dirt a lot, so I'm guessing this wear came from storage or a German Army weapons rack. There seems to be a complete lack of manufacturer markings, but I have often found that to by par for the course when it comes to MG3 bipods. As it stands, I couldn't be happier with my purchase!
Overall Rating
High Quality
Review by Heinrich 1/2/15
The bipod is excellent one indeed, heavy duty metal, and the pivot is solid. You get exactly what you pay for, though I think it should have been about 10- 15 dollars cheaper, because I have seen surplus stores sell them for 40$ in great condition too (back when I didn't need a bipod)