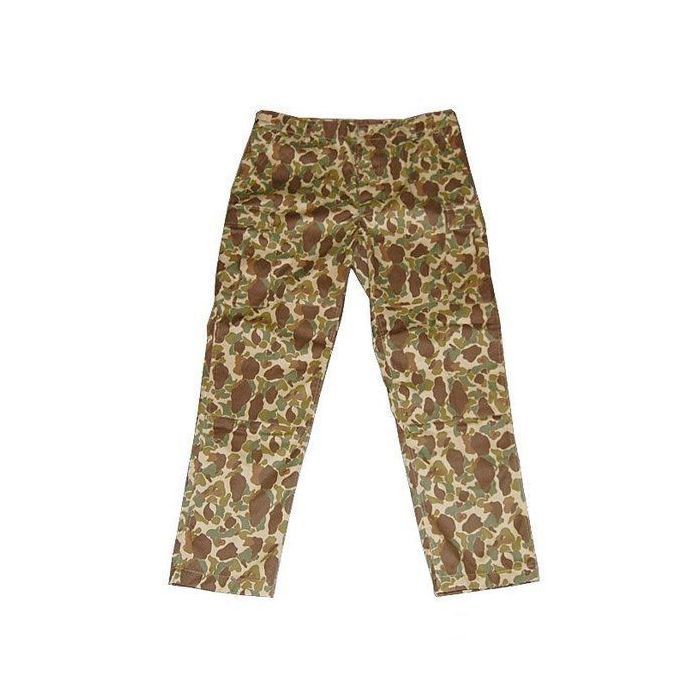 The Mil-Tec Pacific camouflage BDU pants are constructed from a synthetic blend that includes a split of 65 percent polyester and 35 percent cotton for a mix of comfort and durability. These battle dress uniform pants are secured via a button fly, and also feature a series of belt loops. Moreover, the waistband features comfort-fit adjustment straps to provide for a more custom fit. In addition to the reinforced gusset and knees, these pants feature cinch cords at the ankles. These features join a series of six pockets that include: two slash hand pockets, two cargo pockets and two seat pockets. The latter four pockets include buttons for a secure closure.

The Pacific camouflage pattern was the first camouflage pattern that found widespread use with the United States Armed Forces. In 1942, General Douglas MacArthur requested a large supply of camouflage uniforms for use in the Pacific Theater during World War II, which led to the development of Pacific camouflage by Norvell Gillespie. The civilian horticulturist and magazine editor designed the five-color, green-dominant pattern that was often referred to as "frog skin" by soldiers due to its amphibious appearance.

Overall Rating
Another Great product!!
Review by Ken 5/12/18
Thanks for another great product at a really fair price!!
Overall Rating
great pants
Review by scott 4/23/15
Just got them and I must say the quality of these pants are really great. The stitching is all very nice and tight, with no loose threads and the Pockets described are very roomy. These pants say XL, which is about an size 39 to a tight 40, I wear a size 40 and these pants were just a little too exact to the point of being a little uncomfortable, however there is about an inch and a quarter of material to the left of the buttons on the flap, which I just simply stitch a new set of buttons on the far end and after that they feel great. definitely recommend.