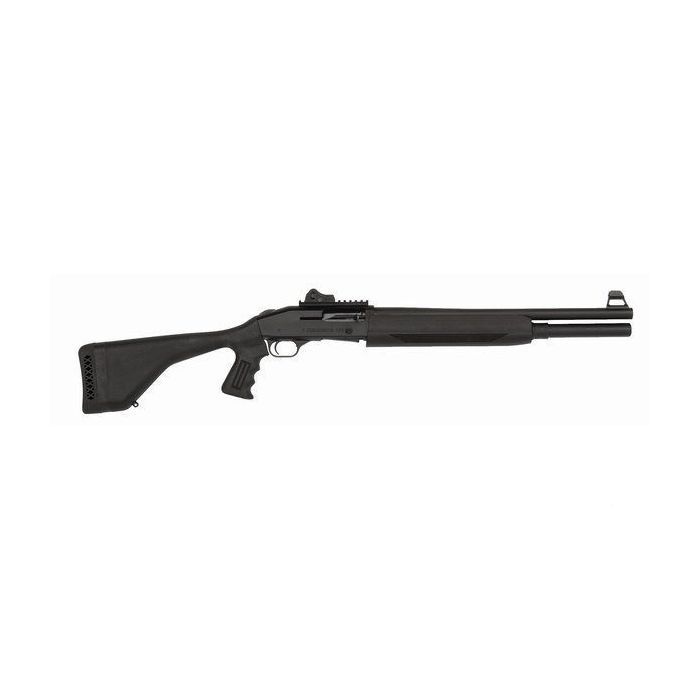 I want to start this description off with an apology in advance in case you find this description to be at all unprofessional or harsh. To be quite honest, shotguns do not excite me all that much. That changed slightly yesterday when I walked into the office to find a couple of brand new Mossberg 930 SPX shotguns waiting to be logged in. Taking one in hand just felt so right – akin to slipping into a pair of perfect-fitting jeans or winning the World Series with a walk-off homerun.

Notify me when this product is in stock
SKU N85370

O.F. Mossberg & Sons was founded in 1919 by Swedish-born Oscar Frederick Mossberg alongside his two sons. That sure explains the origin of the company’s name pretty nicely, does it not? Anyway, Mossberg came to the United States in 1886, where he worked in a bicycle factory owned by Iver Johnson. Yes, that Iver Johnson. And though the company was founded on the Mossberg Brownie, a four-barreled handgun chambered in .22LR, it is now known the world over for producing exceptional shotguns.

But, getting back to the home defense aspect of shotguns, the only thing better than a shotgun is a semi-automatic shotgun. When your life is on the line, you cannot waste precious seconds manually operating the action of a shotgun. You need an autoloader. Not unlike a semi-automatic pistol or rifle, semi-automatic shotguns typically employ a gas operation system that cycles the action (ejecting a spent shell and reloading a shell). Additionally, a gas operation system is able to vent excess gas, leading to a reduction in recoil. Still not sold on the shotgun as the best option for home defense? Read on.

As noted, firearms selected for use in home defense need to include a few different qualities, including power, reliability and ease of use. The Mossberg 930 SPX shotgun is powerful, no doubt. But it also fires the 12 gauge shotshell, which produces a significantly larger area of impact than any projectile fired from a pistol or a rifle. Even if you are a bad shot, you are likely to hit your target. You also want a shotgun that will fire when you pull the trigger, no questions asked, which is exactly what you get when you purchase a Mossberg. Finally, simple operation is also a worthy consideration. You want a shotgun that you can easily point and pull the trigger. That is where the iron sights found on the Mossberg 930 SPX come into play. The ghost ring rear sight is largely considered to be the fastest type of aperture sight available. The large aperture consists of a thin iron ring that provides for a quick pickup of your target and does not obscure much of the target. When combined with the M16-style, fiber optic front sight, which is designed to collect and direct light to the shooter’s eye, you get a sighting system that is truly easy to use. And if you prefer optics, there is an integrated Picatinny rail.

The Mossberg 930 SPX shotgun has an overall length of 39.5 inches and, as noted, an 18.5-inch barrel, which is fully interchangeable to provide a number of configurations for different operations. In addition to the full-length stock that has a 13-inch length of pull and is fully adjustable for both vertical and horizontal angles, the shotgun includes a synthetic pistol grip that provides for a more secure grip. If safety is a concern, you will be delighted to find that the 930 SPX includes a receiver-mounted safety that is easily reached by both left- and right-handed shooters. This is joined by the cocking indicator button, which allows you to visually verify whether or not the shotgun is cocked. Finally, there is an extended magazine tube that offers a “7+1” capacity. Although if you are unable to incapacitate those who would do you harm with less than eight shots, you may want to reconsider your choice of security.

I am not sure I can do anything more to try and sell you this shotgun. I can honestly say that I would trust my life to it and have every intention of purchasing one when the time is right. The Mossberg 930 SPX shotgun is perfect for all of the following:

Quality
Price
Value
Just Awsome!!
Review by Dario 5/10/14
I purchased the Mossberg 930 SPX (Blackwater) model through Keep Shooting. I am patting myself on the back. What a great semi automatic shotgun. Went to the range and put a (100) rounds of tactical slugs through it with no cycling problems, misfeeds, misfires etc...
As for recoil, it does have a little bite but otherwise it is manageable. Mosssberg out did themselves with the 930 SPX. I have a nice collection of high powered firearms (45 acp, 30-06, 223./5.56 etc...). If the SHTF, of all my firearms the Mossberg 930 SPX would be the weapon of choice I would want in my hands.