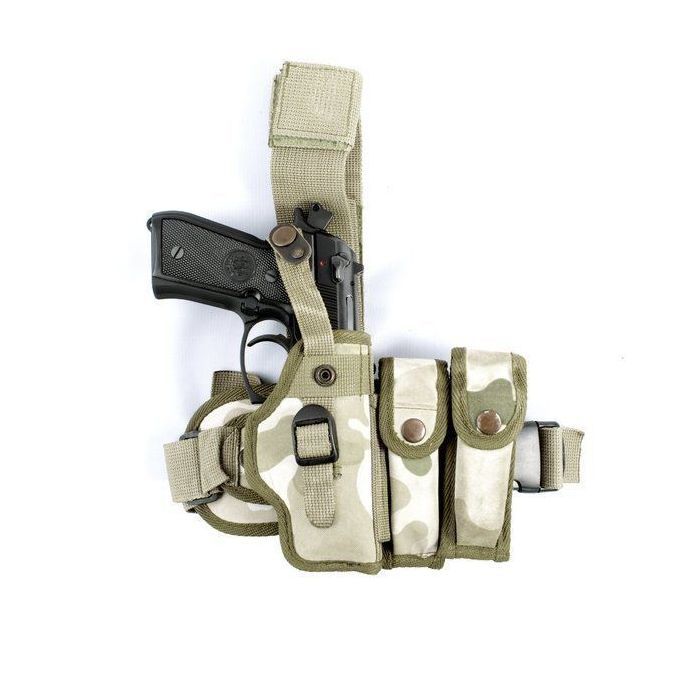 The Polish Army Drop Leg Holster is a military surplus holster from the Polish Army. Soldiers in the Polish Army made extensive use of this tactical holster while serving in Iraq and Afghanistan. Designed to hold a large frame semi-automatic pistol along with two extra magazines, this thigh holster is perfect for pistols like the Beretta M9 or similar sized handguns.

The Polish Army has been modernizing their equipment since Poland was admitted into NATO to ensure their soldiers have the best equipment possible. Since Poland is a NATO member, Polish troops have served side by side with American forces in both Iraq and Afghanistan. Recognizing the need for equipment for these two war zones, the Polish Army adopted their own desert camouflage and began producing equipment like this drop leg holster using their new desert camouflage pattern.

Now that the Polish deployments are ending, we were able to procure these excellent Polish army drop leg holsters. The style of this tactical thigh holster is very similar to all drop leg holsters in that it attaches around your leg with an additional strap for your pistol belt to ensure your holster stays attached. There is also two extra magazine pouches to give you the capability of carrying spare magazines to ensure you are ready for what ever you encounter. The unique Polish desert camouflage could best be described as a tan version of the Polish Pantera camouflage pattern.