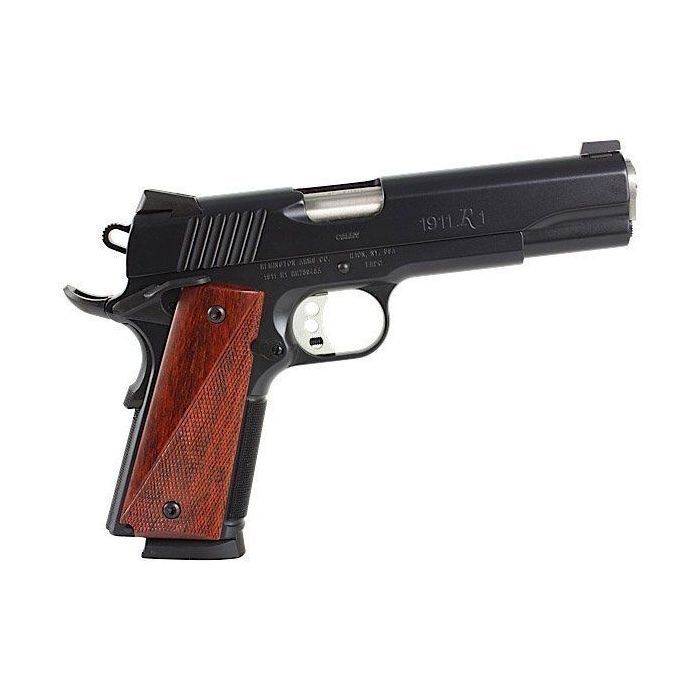 (0)
The Remington 1911 R1 Carry is a true 1911 in that it is a single-action, semi-automatic, short-recoil operated pistol chambered for the powerful .45 ACP cartridge. Boasting a fresh take on the iconic design introduced by John Moses Browning over 100 years ago, the Remington 1911 R1 Carry is just one in a new line that represents the company's first handgun offering in quite some time, and is poised to become a mainstay in your concealed carry holster. Each pistol ships with one seven-round magazine, one eight-round magazine and a hard plastic carrying case.

Remington Arms Company, LLC is an arms manufacturer that is headquartered in Madison, North Carolina that specializes in handguns, rifles and shotguns for the civilian market as well as the military and law enforcement sectors. Founded in 1816 in Ilion, New York by Eliphalet Remington under the name of E. Remington and Sons, the company went on to become the oldest continuously operating arms manufacturer in the United States. It is also the only American arms manufacturer that produces firearms and ammunition domestically. But the accolades do not end there. The company is also the largest American producer of rifles and shotguns. With nearly 200 years of experience under their belts, Remington is a name you can trust.

As noted, Remington is the largest American producer of rifles and shotguns. It goes without saying that these products are what set them apart from the rest of the arms industry. Interestingly enough, the company never did seem to invest much time or effort into the research and development of handguns, having produced only a handful of pistols and revolvers throughout its storied history. Prior to 2010, Remington's last handgun was the Remington XP-100, a unique bolt-action pistol that was produced from 1963 to 1998. Nearly 12 years would pass after the discontinuation of the XP-100 before Remington produced another pistol. But in 2010, the time was right and the company introduced the Remington 1911 R1 Series, which includes the Remington 1911 R1 Carry that is available here today.

The Remington 1911 R1 Carry is everything you would expect from a 1911 developed specifically as a concealed carry firearm and more. It is what Remington is calling, "America's favorite pistol design – built by America's most trusted gun maker." And you know what, they could not be more right. By sacrificing none of the subtleties characteristic of the design, Remington has produced an affordable 1911 with a performance that is on par with or exceeds every other standard 1911 on the market. And with a score of features tailored to aid shooters with concealed carry needs, this pistol is primed to take the market by storm.

The Remington 1911 R1 Carry pairs the historic accuracy and reliability of the platform with modern manufacturing technology to provide for a pistol that is produced to exacting tolerances tailored for match-grade performance right out of the box. It features a five-inch stainless barrel (1:16 inch twist) with a target crown and an overall length of 8 1/2 inches. The precision-machined slide and frame, which are joined by cocobolo grip panels, are constructed from dehorned carbon steel and feature a satin black oxide finish that adds protection from both rust and corrosion. The single-action trigger mechanism boasts a crisp trigger with a pull that is rated between just 3 1/2 and five pounds. And though the pistol weighs in at a respectable 38 1/2 ounces, it is easily handled and concealed. Other features include a beavertail grip safety with checkered memory bumps alongside an ambidextrous manual thumb safety, a checkered front strap and mainspring housing, dovetailed Novak sights with a tritium front sight and a machined skeletonized aluminum match trigger. As noted, the pistol is chambered for the .45 ACP cartridge and includes one seven-round magazine and one right-round magazine.

The choice is clear – pick up a recent design that is as of yet unproven, or go with the design that has protected the United States Armed Forces for over 100 years. 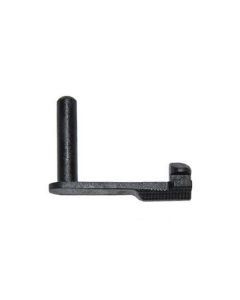 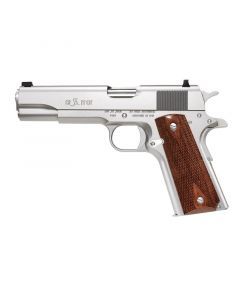