Based on the legendary 870, the Remington 887 Nitro Mag Tactical is an armor-clad, tough-as-nails, 12-gauge pump-action shotgun with an 18.5-inch barrel that fires 2.75-, 3- and 3.5-inch shotshells and will see you through your darkest days. Whether you are on the run from crazed mercenaries or protecting your home, this 6-shot behemoth will be the last shotgun you ever need. 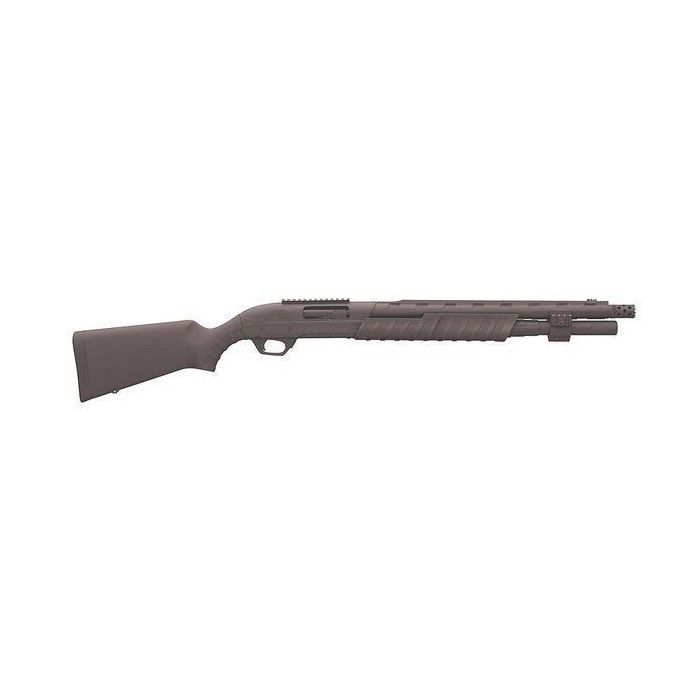 Remington Arms Company, LLC is an arms manufacturer that is headquartered in Madison, North Carolina that specializes in handguns, rifles and shotguns for the civilian market as well as the military and law enforcement sectors. Founded in 1816 in Ilion, New York by Eliphalet Remington under the name of E. Remington and Sons, the company went on to become the oldest continuously operating arms manufacturer in the United States. It is also the only American arms manufacturer that produces firearms and ammunition domestically. But the accolades do not end there. Remington is also the largest American producer of rifles and shotguns. With nearly 200 years of experience under their belts, Remington is a name you can trust.

As noted, Remington is the largest American producer of rifles and shotguns. It goes without saying that these products are what set them apart from the rest of the arms industry – especially their shotguns. And the Remington 887 Nitro Mag Tactical is no exception. As noted, the shotgun is based on the famed Remington 870 and borrows several design features from it. Most notable are the similarities between each shotgun's barrel, receiver and action. These components withstanding, the shotguns are not very similar. And in the case of the 887, that is a good thing. The 887 is actually thought to offer a few marked improvements over the 870 in terms of overall user friendliness, as seen in the slide release and ease of disassembly. The true hallmark of the Remington 887 Nitro Mag Tactical, however, is its ArmorLokt™ finish.

When I called the Remington 887 Nitro Mag Tactical an armor-clad behemoth, it was not for comedic effect. It really is wrapped in a suit of armor. The barrel and the receiver, as well as all other metal surfaces on the shotgun, are encased within Remington's proprietary glass-filled polymer material known as ArmorLokt™. This material forms a protective barrier that protects the shotgun from all of the harshest elements, which means no rust, corrosion, pitting or anything else. Not to mention the cool space-age look it gives the shotgun. Bravo Remington.

The Remington 887 Nitro Mag Tactical is a 12-gauge pump-action shotgun that features an 18.5-inch barrel and an overall length of 39 inches. The hammer-forged barrel and the receiver are both constructed from 4140 steel and fall under the protection of the ArmorLokt™ polymer coating. As noted, the shotgun boasts a magazine with a "6+1" capacity and is capable of firing 2.75-, 3- and 3.5-inch shotshells interchangeably. The shotgun weighs in at a manageable 6.875 pounds. Though the shotgun is included with a green fiber-optic HiViz® front sight that allows for quick point-and-shoot aiming, the integral MIL-STD 1913 rail mounted on the receiver allows for easy attachment of optics and other tactical equipment. Not to mention the inclusion of a secondary rail mounted on the extended magazine tube for the attachment of lights, lasers and other gear. Other features on the 887 include a synthetic stock with a SuperCell recoil pad, built-in sling swivel studs and a ported tactical Rem™ Choke.

There is a reason Remington is one of the most trusted names in the firearms industry. It is because of shotguns like the Remington 887 Nitro Mag Tactical that the strong reputation of Remington Arms is upheld. If your mind is not urging you to purchase this shotgun right now, you should probably see a doctor. Consider the 887 for: