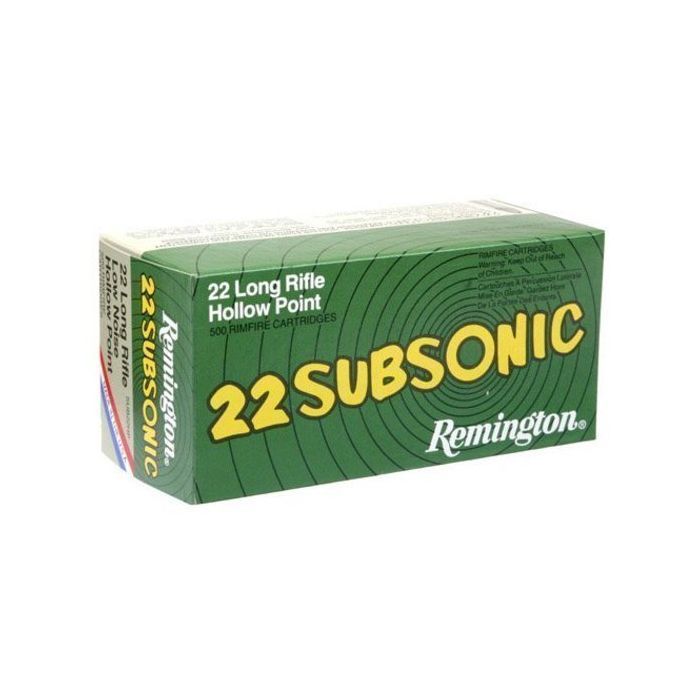 Remington Subsonic .22 LR ammunition is a product from the Remington Arms Company, LLC. Developed as a multi-functional rimfire cartridge that is ideal for everything from practice plinking to match shooting, the Remington Subsonic .22 LR cartridge is designed for both noise reduction and high accuracy. Each box contains 50 brass-cased rimfire cartridges, each of which contains a 38 gr subsonic hollow point projectile. These non-corrosive, cartridges are perfect for use with the Ruger 10/22 platform or any other firearm chambered for the .22 LR cartridge.

Notify me when this product is in stock
SKU SUB22HP

That said each box of Remington Subsonic .22 LR ammunition, as noted, contains 50 non-corrosive, brass-cased rimfire cartridges. Each cartridge contains a 38 gr subsonic hollow point projectile, which provides for noise reduction, superior terminal ballistics and respectable muzzle velocities. In fact, this particular load is capable of producing muzzle velocities that have been observed to travel at speeds of up to 1,050 fps.

Overall Rating
excellent sub sonic ammo
Review by RemMax 4/18/13
I just got a brick of 500 of these again last week,
I shoot thich with or without my suppressor
Either way it;s clean and accurate but really excells at use with a suppressor
Acurate to 100 yards able to hold 1.5 inch groups with or without the can at 100 yards
I Used to buy it in 5000 rounds Flats at a time till the gun grab crap started
Looking forward to when I can get it that way again
RemMax