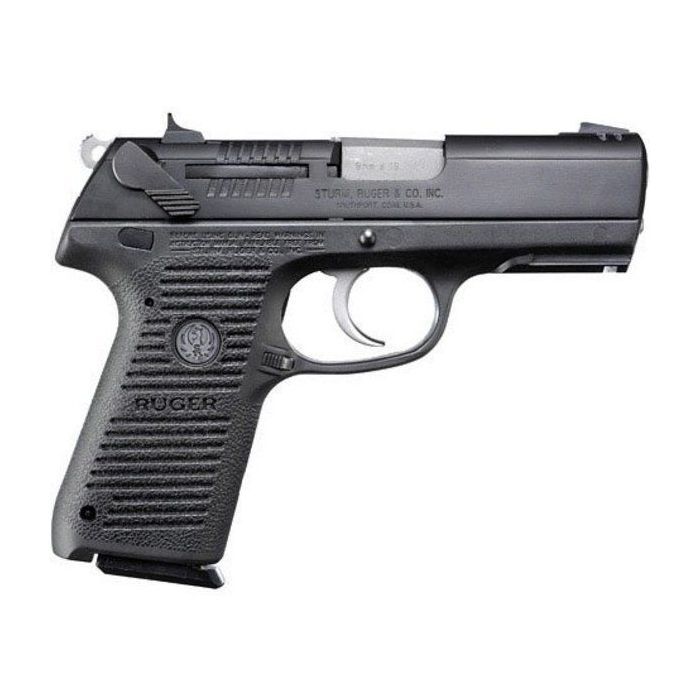 5 1 (1)
The Ruger P95 is a semi-automatic, centerfire pistol that utilizes a short-recoil operation and is chambered for the 9x19mm Parabellum cartridge. Its design borrows heavily from two major successes that preceded it, the SIG Sauer P220 and the M1911, which serves to solidify its reputation for excellence. Lauded for ruggedness and durability, this pistol sacrifices a sleek profile for unyielding performance in the toughest conditions, making it a great choice for all shooting applications, from official duty and personal defense to target shooting and more. Each P95 ships inside of a hard plastic carrying case with two 15-round magazines and a magazine loader.

It was in 1949 that Sturm, Ruger & Company, Incorporated, more commonly known as Ruger, was founded by William B. Ruger and Alexander McCormick Sturm. Since then, the Connecticut-based arms manufacturer has been recognized as a leader in centerfire and rimfire handguns and rifles and renowned for their reputation regarding both reliability and durability. It is that very same reputation that pushes the company to build upon their past successes and continue production of new firearms that surpass the old in terms of both quality and performance, which is exactly how the P Series came about. Without a doubt, the Ruger P series – the Ruger P95 in particular – has surpassed its predecessors on all fronts.

Originally introduced in 1996, the Ruger P95 hails from the much larger P Series, which was introduced 11 years earlier in 1985. The P Series is a rugged series of semi-automatic, centerfire pistols, each of which operates on a locked breech, short-recoil system that borrows heavily from both the SIG Sauer P220 and the M1911. Intended for military, police, civilian and recreational use, the P Series is touted as a series of simple, economical and serviceable pistols that can be counted on to perform on any conditions, and that is exactly what they are.

One of the selling points for the Ruger P95 is its simple design, which lends itself to easy maintenance. The P95 is designed to be taken down, without the use of special tools, into five major subassemblies for cleaning and routine maintenance.

The Ruger P95 features a 3.9-inch, stainless steel barrel (1:10 inch twist) alongside an overall length of 7 1/4 inches. Part of the pistol's ruggedness comes from its use of chrome-molybdenum steel, which has been blued to protect it from rust and other forms of corrosion. When paired with the lightweight, reinforced polymer grip frame, which features non-slip textured grip panels, the pistol weighs in at a manageable 27 ounces – just less than two pounds. Other features include an ambidextrous manual safety that is easily reached with either thumb, a high-visibility three-dot iron sight system for quick and easy target acquisition, a rounded trigger guard and an integral Picatinny rail for the attachment of lights, lasers and other tactical accessories. As noted, the pistol is chambered for the 9x19mm Parabellum cartridge and includes two 15-round magazines.

The Ruger P95 is an excellent choice for:

Overall Rating
Well made pistol at a good price
Review by RemMax 5/6/13
Verified Buyer
I bought my first P seires Ruger when the P85 came out and over the years have also bought a P89 and a P94 in 9mm as well as a P92 in 40 S&W caliber
I still to this day own my P85, I regretfully have had to sell my other P seires pistols over the years but never because of a flaw in the gun, each one was sold when I was thinning out my collection to make room (and money) to add something different to my collection
However during the years I owned my P95 I never once had a problem with that firearm, it served me well and spent many hours on the range plinking cans or target shooting for practice and of the thousands of rounds I put through it it never once gave me any problems
I must admit I am not the biggest fan of the PSeries Trigger, firng single action the trigger breaks crisp and clean making hitting targets and printing tight groups at 25 yards a reasonably easy task
The triggger however has a very long reset on every one I have owned or shot over the years from my 85 to the 95
This means the trigger has to come nearly all the way back to the original "rest" point to reset wich in turn makes rapid firing very difficult with a P Series Pistol.
On the PRO side though that long reset and slowing down rapid firing is not always a bad thing, it makes this pistol a perfect match for treating new and/or young shooter to slow down, Aim, then fire a lot easier tha the same task with say a Glock and its short reset trigger
This is the main reason why I have kept my P85 all these years First of I chose to keep my 85 over my 95 because it was my original Ruger 9mm otherwise I would have kept the newer 95 with the lower round count through it (I'm funny that way:)
But to the point while the P95 is a good all around 9mm to me it's most valuble use is as a training gun for new ahooter
The P95 is like all the P Series it is extremely rugged, durable and extremely dependable even when its put through rough treatment we don't typicaly put our guns through
I loved all these guns for their ruggedness and reliability with the only real Con being the long trigger reset
However if your not into speed shooting but more into accurate shooting these are excellent guns
And if you haveaa kid growing up that your going to be teaching to shoot there is no gun better suited to that job than this one right here
Overall I will most likely always own at least 1 of the Ruger P pistols
And with the price of guns these days you are simply not going to find a better all around 9mm handgun than the P95 for general use. From Concealed carry to match shooting to training beginners shooting this one pistol is well suited to them all
Its only Con being the long reset if your into rapid fire or Speed shooting and with the price of ammo these days most of us can't afford that anyway
If your looking for a quality, American Made 9mm Side Arm at a reasonable price this is definetely the gun for you
Overall my P95 served me well without any issues
Definetely a high quality 9mm side arm
RemMax