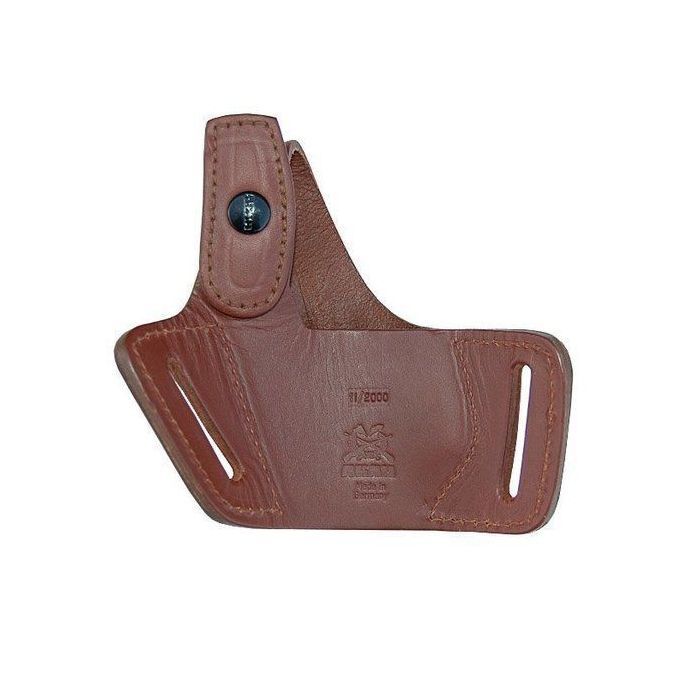 My neurotic style of writing allows me to cover a wide array of topics here at Keepshooting.com – some that probably have no business being discussed on a website that deals with firearms and military surplus. But many topics do belong here, including personal protection and concealed carry, which are topics that have come up frequently in the past. Typically, those discussions have involved our available pistol and ammunition choices for concealed carry. But that topic carries another big consideration as well, one that has yet to be discussed – holsters.

How you carry your pistol is almost as important as which pistol you decide to carry or which cartridge you decide to use. And while there are not nearly as many choices, there are still quite a few. You can choose between outside the waistband holsters, inside the waistband holsters, shoulder holsters and a slew of others. If you happen to carry a SIG P6/P225, put your worries to rest. The only realistic choice is Keepshooting.com's new SIG P6/P225 belt holster.

The SIG P6/P225 is a compact version of the SIG P220 and is often used for concealed carry. Consider using it with the SIG P6/P225 belt holster, an inexpensive alternative to the more pricey holsters on the market. Made in Germany, like the pistol, the holster is constructed entirely from high-quality leather and is available in both left- and right-hand draw versions.

Because of its compact size, the SIG P6/P225 is a popular choice for concealed carry. If you own one, consider carrying it in conjunction with the SIG P6/P225 belt holster – now available for just $9.95.

As noted, the SIG P6/P225 is a compact version of the P220. Though these two pistols are relatively identical, there are some slight differences, including the trigger pull, hammer style, sights and the feed ramp. The biggest difference is the designation. The SIG P6 is the West German police variant. Whatever version you have, it will pair very nicely with the SIG P6/P225 belt holster.

As noted, the SIG P6/P225 belt holster is made in Germany by Akah, a company known for its high-quality leather goods. As such, the holster is constructed almost entirely from leather. The only non-leather component is the snap fastener that secures the pistol.

The SIG P6/P225 belt holster is an outside the waistband holster designed to be worn on a belt. It is contoured and fits comfortably on the hip while providing quick and easy access to your pistol. To wear, simply thread a belt through both belt loops on each side of the holster. Though it may not be the premiere choice for concealed carry, its ease-of-use and low price point makes it a top contender. As noted, both left- and right-hand draw versions of the holster are available.

Above, you will notice our pictures, which show a variation in the color of the holsters. Almost every holster is some shade of brown. Due to the materials used in manufacturing the holster and aging, many of the holsters are not identical in color. Because there are a variety of shades, we are unable to offer a color selection. Rest assured each of the holsters is in excellent cosmetic and working condition.

At only $9.95, you will be hard pressed to find a higher-quality holster at a lower price. The SIG P6/P225 belt holster is perfect choice for:

Overall Rating
P226 fits
Review by Glenn 11/16/14
These are excellent quality leather holsters. I got one from 2000 and it's used, but it's still in very good condition. It fits my p226, but it's a little tight. I'm sure it'll wear in quite nicely.
Overall Rating
Dye it black
Review by FHL 4/13/14
The other reviewers covered it pretty well, great price, perfect fit for the P6/225, quality leather, durable, but.... it's brown. Meh.

Well, if you want to dye it black, here's how: Get black Kiwi Leather Dye, in the plastic bottle with the sponge applicator tip (shoe polish section, 3 1/2 bucks at Walmart), shake it up and just start coating the outside of the holster. Take your time, multiple coats are needed to really turn it black (but it will get there), and the dry time between coats is long - a good 12 hours. I only did the inside areas of the holster near the top strap, no need for the whole inside. The whole process took several days and lots of coats, but the now the thing looks great, it has a really nice black finish like it was made that way.
Overall Rating
Great for the money
Review by KP Duty 3/20/14
These are one of the best deals on the site if they fit your needs. Excellent quality, I’ve ordered two, one made in 1995 (light brown) showed use but was in good shape but used; the other (dark brown) was made in 2005 and looks unused. If you’re thinking about getting one give it a try.
Overall Rating
sig p6 belt holster good quality great fit
Review by Robert 3/17/14
when i ordered this holster i did not own a sig but did own a smith&wesson sigma, this holster fits perfectly for the price could not be more pleased
Overall Rating
fits more than just the P6/P225
Review by DK 6/23/13
I ordered this for my S&W 5904 (which has the square trigger guard) and it fits probably a 9 out of 10, considering it wasn't made for this handgun. Given the profile of the holster it should probably fit a number of square trigger guard semi-autos.

The quality of the leather is good (got a brown toned one) and it says "Made in Germany" on it. Stills smells "leathery". There is a little felt sticky dot to cover the inside of the snap to protect the firearm finish.

I was a little disappointed after I opened the box when I discovered that the thread had pulled out from the leather around the trigger guard area. After some self-debating over whether to bring it to a saddle shop or shoe repair man for a proper repair, I just fixed it myself with some thick dental floss (old boy scout trick) through the original holes. 20 minutes later it was good to go.

My quick repair seems to be holding pretty well. Time will tell though. The 5904 rides nice and high and fairly close. Good for a winter time pancake style holster with a cover garment (have a permit) as with a handgun that big it still prints badly.
Overall Rating
great holster
Review by Mike 11/26/12
Though made in 1994, the holster seems unused and is of good quality leather. It's concealable and fits my lil sig well.
Overall Rating
fits Sig 225/P6 , 220 & my Compact 245
Review by rodney 7/31/12
In like new condition, brown leather. Stamped Made In Germany, Will hold my Sig 225/P6, 220 and 245 compact. Well pleased ! Never find this good a quality holster at this price. Does appear to be undercover police issue & quality.
Overall Rating
Fits my Sig P226 and 2022
Review by Jay 7/24/12
I purchased two of the same holster off of another vendor a few years ago. I don't have a Sig 6/P225. However I decided to take a chance and this holster fits my Sig 2022 in 9mm, and my Sig P226 in 9mm, with no problem. My Sig P226 is an old 90s model without the rail. Oddly enough the My Sig 2022 and P226 do not fit in the plastic black surplus holsters for the Sig 6/225 which are currently on the market. The holster is nice thick leather, the inside of the holster is just treated leather. They put a tab over the back of the button to prevent it from marring the pistol. These are well built, I believe they would sell for a lot more if they were made by a manufacturer that American shooters are more familiar with.
Overall Rating
high quality
Review by MADDOG 7/3/12
A high quality leather holster for my Sig mosquito. That easily conceals under my shirt.
Overall Rating
Fits like a glove
Review by Don 6/3/12
As a lot you guys, I was unsure buying anything used, but this holster is in great shape, not even as broke-in all the way. This is an excellent value. If you have a P6/P225 it is a must have.
Overall Rating
Solid holster for little money.
Review by Hobbiest 5/19/12
It is well made, thick leather really solid it must be for police, because it is not flimsy, however mine was very used...