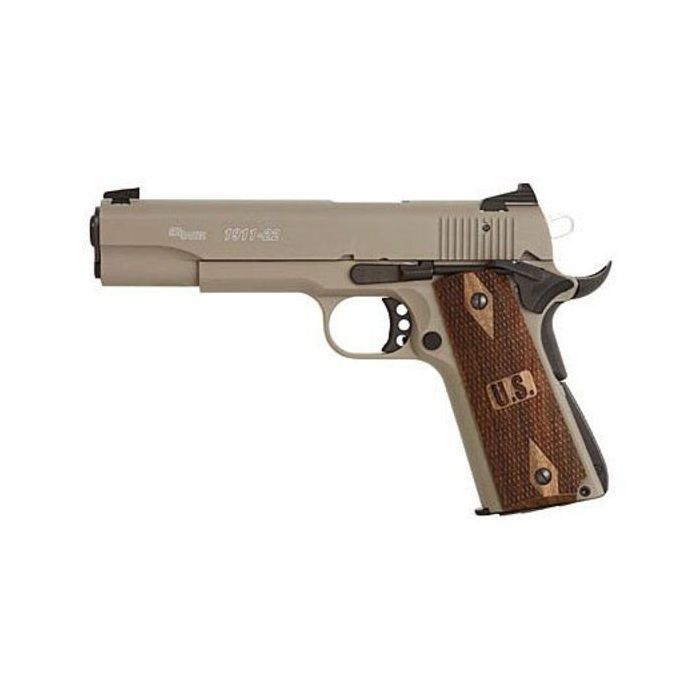 5 1 (1)
If you find yourself with an unyielding need to get your hands on a 1911, consider the SIG Sauer 1911-22. The SIG Sauer 1911-22 is a semi-automatic rimfire pistol that utilizes a blowback operation and is chambered in .22 LR. The interesting thing about this pistol is that it features a Mil-Spec design and dimensions while including the same manual thumb safety and grip safety characteristic of the real deal. Each pistol comes with a single 10-round magazine, a gun lock and a hard-shell carrying case.

SIG Sauer, Inc. was originally established in 1985 as an American branch of SIG Sauer GmbH, the German arms manufacturer based in Eckernförde, Germany. SIG Sauer, Inc. began as Sigarms Inc. and was originally based in Tysons Corner, Virginia. The company was created for the American importation of German-produced SIG Sauer firearms. In 1990, the company moved its headquarters to Exeter, New Hampshire to accommodate the new manufacture of certain SIG Sauer models in addition to continued importation. It was not until 2007 that the company changed its name to the current incarnation. Today, the company is one of the fastest growing arms manufacturers in the United States. Offering a wide range of products to a wide range of markets including the military, law enforcement and civilians, the company prides itself on their high-quality, reliability and unrivaled performance – qualities that are all readily apparent in the SIG Sauer 1911-22.

As noted, the SIG Sauer 1911-22 features a Mil-Spec design and dimensions, which is great for those who want the look of a true 1911 without paying a hefty price. Even more interesting, however, is the inclusion of several modern safety features that go above and beyond the typical manual thumb and grip safeties that are characteristic of 1911s. The SIG Sauer 1911-22 looks to usher in a new era of safety for the 1911 with the introduction of three safeties that are not usually found on the pistol. These include a magazine safety, a drop safety and a firing pin safety – all of which provide peace of mind when taking a trip to the range.

The SIG Sauer 1911-22 features a 5-inch barrel alongside an overall length of 8.5 inches. It even features a nice, solid weight that is reminiscent of a true 1911 – 34 ounces. The single-action-only trigger mechanism provides the pistol with a trigger pull of approximately 4.2-5.6 pounds. The pistol also includes a contrast three-dot iron sight system. Other features include a flat dark earth finish, rosewood grips and a skeletonized trigger/hammer.

Budget buying has never been so sweet. Besides, it is much more cost-effective to fire a 1911 chambered in .22 LR than it is one chambered in .45 ACP. So now matter how you slice it, picking up the SIG Sauer 1911-22 is a win-win situation. Consider this pistol for:

Overall Rating
Nicest 1911 style 22LR made in the USA.
Review by Raymond V. 12/21/15
Verified Buyer
What a great feel this handgun has and the balance is unbelieveable and combined with its three dot sighting system makes target shooting a breeze. Save your 45acp 1911 for personal protection and practice with this one instead.