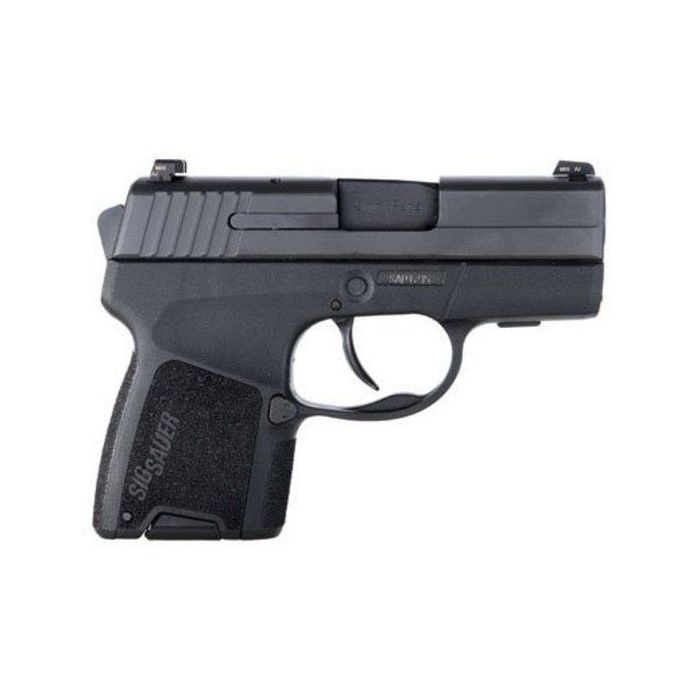 The SIG Sauer P290 is a subcompact, double-action-only, polymer-framed pistol that utilizes a short-recoil operation and aims to take the concealed carry market by storm. With dimensions that are dangerously close to the aforementioned Ruger LCP, the SIG Sauer P290 kicks the power up a notch with its 9x19mm Parabellum chambering. It is also one of the only pistols in its class to offer removable grip plates for serious customization. Each pistol ships with two magazines – one six-round magazine and one eight-round extended magazine.

Notify me when this product is in stock
SKU 290RS9BSS

SIG Sauer, Inc. was originally established in 1985 as an American branch of SIG Sauer GmbH, the German arms manufacturer based in Eckernförde, Germany. SIG Sauer, Inc. began as Sigarms Inc. and was originally based in Tysons Corner, Virginia. The company was created for the American importation of German-produced SIG Sauer firearms. In 1990, the company moved its headquarters to Exeter, New Hampshire to accommodate the new manufacture of certain SIG Sauer models in addition to continued importation. It was not until 2007 that the company changed its name to the current incarnation. Today, the company is one of the fastest growing arms manufacturers in the United States. Offering a wide range of products to a wide range of markets including the military, law enforcement and civilians, the company prides itself on their high-quality, reliability and unrivaled performance – qualities that are all readily apparent in the new SIG Sauer P290.

The changing trends in government and society have recently led to a spark in public interest as it relates to firearms. As such, more and more arms manufacturers are developing and producing firearms that are designed to meet the needs of the newcomers. That includes a number of pistols designed specifically for concealed carry and personal protection as citizens seek out new means by which they can protect themselves and the ones they love. Enter the SIG Sauer P290, a pistol primed for personal protection. What makes the SIG Sauer P290 truly special, however, is the inclusion of a number of practical features in such a small package, each of which make it worthy of your consideration as a concealed carry pistol or for recreational shooting. The most apparent of these features is the inclusion of SIGLITE® night sights, which make shooting in conditions that are less than ideal much simpler.

The SIG Sauer P290 features a 2.9-inch barrel and an overall length of 5 1/2 inches. Weighing in at just over single pound with a magazine, its superlight weight combines perfectly with an ergonomic shape and drastically reduced dimensions that make carrying this subcompact pistol a non-issue. With a double-action-only trigger pull rated at an average of nine pounds, the P290 provides top-notch performance and unbelievable accuracy right out of the box. Other features include a Nitron®-coated stainless steel slide alongside a black polymer frame and the option of customizable grip plates. As noted, each pistol features SIGLITE® night sights and comes with two magazines – one six-round magazine and one eight-round extended magazine.

Big or small, a firearm is the best choice for personal protection. But if it were up to SIG Sauer, Inc., then small would be the only choice. Consider the new SIG Sauer P290 for: