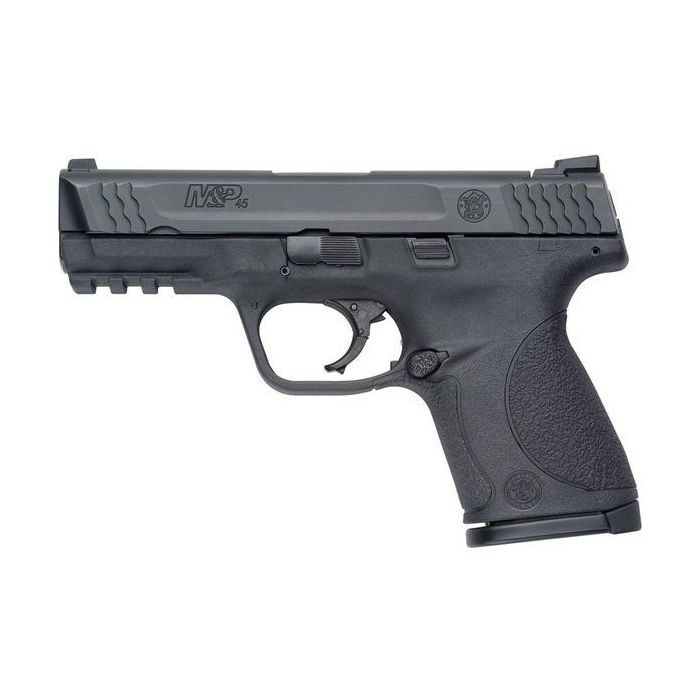 5 1 (1)
Like all other models in the M&P line, the Smith & Wesson M&P45 Compact is a semi-automatic, striker-fired polymer pistol. As its name suggests, the pistol is chambered for the powerful .45 ACP cartridge, a top choice among the self-defense community. Additionally, the compact frame of the pistol makes it suitable for a number of applications, including concealed carry and personal protection, official duty and even recreational shooting. Each pistol also ships with one flush-fitting eight-round magazine, one finger-rest eight-round magazine, three interchangeable grips and a hard plastic carrying case.

Smith & Wesson's Military & Police, or M&P, pistol line debuted in 2005 as a revamp of the notably less popular Sigma design. Designed with reliability, durability and accuracy in mind, the M&P line of pistols share a core of features that places emphasis on ergonomics and safety, which makes shooting both comfortable and foolproof. Let us take a look at a few of those features and see why the Smith & Wesson M&P45 Compact is a pistol that is truly worth your consideration.

A major hallmark of the M&P line is ergonomics, which provides for a pistol with high levels of comfort and functionality. A feature that is immediately noticeable is the inclusion of three interchangeable palm swell grips – one small, one medium and one large. Each grip provides an aggressive texture that is present not only on the front and back straps, but the magazine release as well. This texture is designed to provide enhanced control in any environment. Another noteworthy feature regarding the magazine release is its reversibility, which serves to accommodate both left- and right-handed shooters. It also drops the magazine freely from the pistol when depressed. Left-handed shooters will also be happy to hear that the slide stop is ambidextrous as well. The oversized trigger guard allows for simple operation of the pistol with or without gloves. Finally, the 18-degree angle of the grip promotes more natural aiming. All of this blends perfectly with the easy-to-conceal profile and compact frame of the pistol.

Safety is the other major hallmark of the M&P line of pistols. The most prominent safety feature found on M&P pistols is the passive trigger safety. This provision seems to be included with many modern pistols, and for good reason. The disjointed trigger features a secondary lever that must be pulled in conjunction with the trigger. This safety prevents any accidental discharges by requiring that the trigger be fully and intentionally depressed. It also protects against discharges that might occur in the event that the pistol is dropped. Other safety features include a sear deactivation lever that allows the pistol to be disassembled without pulling the trigger and a loaded chamber indicator, which provides a visual confirmation on the status of the chamber. This pistol is also available with or without a magazine safety.

As for the rest of the pistol, the Smith & Wesson M&P45 Compact boasts reduced dimensions that are optimal for concealed carry. It features a four-inch barrel and an overall length of 7.55 inches – down from the 4 1/2 inch barrel and 8.05-inch overall length of the full-sized model. Materials used in producing the pistol include Zytel® polymer for the frame and stainless steel for the chassis, slide and barrel. Both the slide and the barrel feature a black Melonite® finish. The slide also includes scalloped serrations for a secure grip when retracting the slide. The pistol weighs in at just 26.2 ounces (unloaded) and includes a three-dot iron sight system, which consists of a contoured dovetail front sight and a steel low-profile rear sight. Also noteworthy is the seven-pound trigger pull and minimal .140-inch trigger reset, which when combined with the sight system allows for high performance and simple follow-up shots. As noted, each pistol comes with two eight-round magazines. 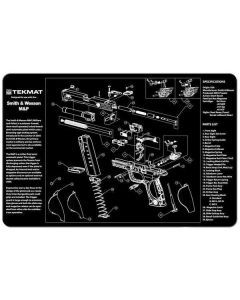 Overall Rating
My preferred CCW
Review by Tank 8/27/20
Verified Buyer
With the 7+1, 8 rounds of 45 ACP hollow point will get the job done, every time. Handles well, shoots consistent, low recoil. Can't say much more. Pray every day I don't have to use it, but know when the time comes, it won't let me down