The Springfield XD-45 Compact is a semi-automatic, striker-fired, polymer pistol that utilizes a short recoil operation and is, as its name suggests, chambered for the .45 ACP cartridge. An ideal choice for a range of applications, the XD-45 Compact is a diamond in the rough of run-of-the-mill polymer pistols, and is primed to become your favorite firearm. Additionally each Springfield XD-45 Compact ships in a hard plastic carrying case with a wealth of accessories, including: one 10-round magazine, one 13-round extended magazine, a magazine loader, a magazine holster and a pistol holster. 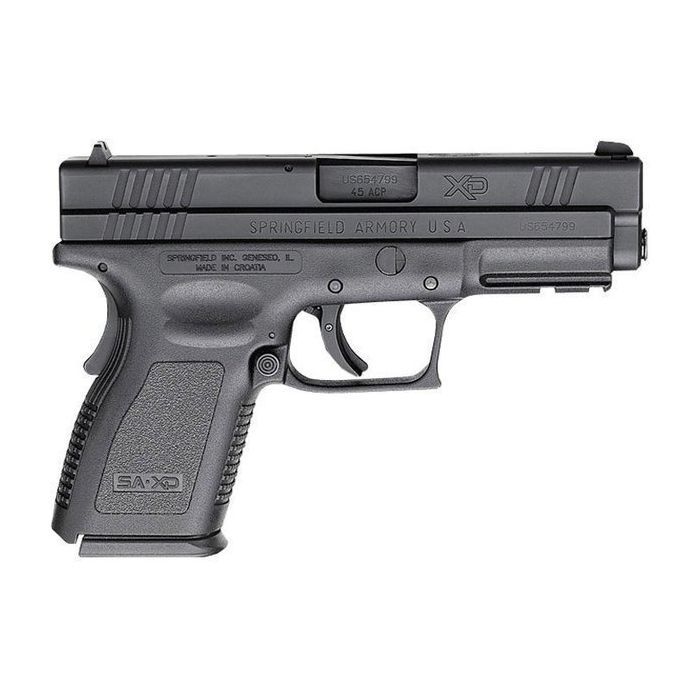 In 2002, Springfield Armory brought the XD Series of pistols to the U.S. market. Originally manufactured in Karlovac, Croatia by renowned Croatian arms manufacturer HS Produkt, where it is known as the HS2000, "Springfield XD" is nothing more than a marketing name for the pistol here in America. Nevertheless, the series quickly rose through the ranks, surpassing other polymer pistols from top manufacturers in terms of performance, safety and reliability with a mix of desirable features.

Each pistol in the Springfield XD Series features a factory-standard two-stage trigger will have you placing tight groups on any target with ease. They also boast a number of safety features like the loaded-chamber indicator and the striker-status indicator, which provide the shooter with both visual and tactile confirmations as to whether the pistol is loaded and cocked. Add in the grip safety, ultra safety assurance (USA) trigger, drop safety and out-of-battery safety and you have a pistol that is at the top of its class in all of the areas that matter most.

The Springfield XD-45 Compact features a four-inch barrel alongside an overall length of 7.3 inches. The steel barrel has both a Melonite finish as well as a fully-supported ramp. The forged steel slide also features a Melonite finish for enhanced protection against rust and corrosion. Joined by a lightweight, polymer frame, the pistol weighs in at just 29 ounces – making it manageable by just about anyone. The pistol also includes a three-dot iron sight system, which features a dovetail front sight and provides for rapid acquisition of targets and pinpoint accuracy. As noted the pistol includes two magazines – one flush-fitting 10-round magazine as well as an extended 13-round magazine. Other features include a MIL-STD 1913 rail for mounting lights, lasers and other tactical equipment.

When it comes to versatility, the Springfield XD-45 Compact is one of the best. Consider this pistol for: