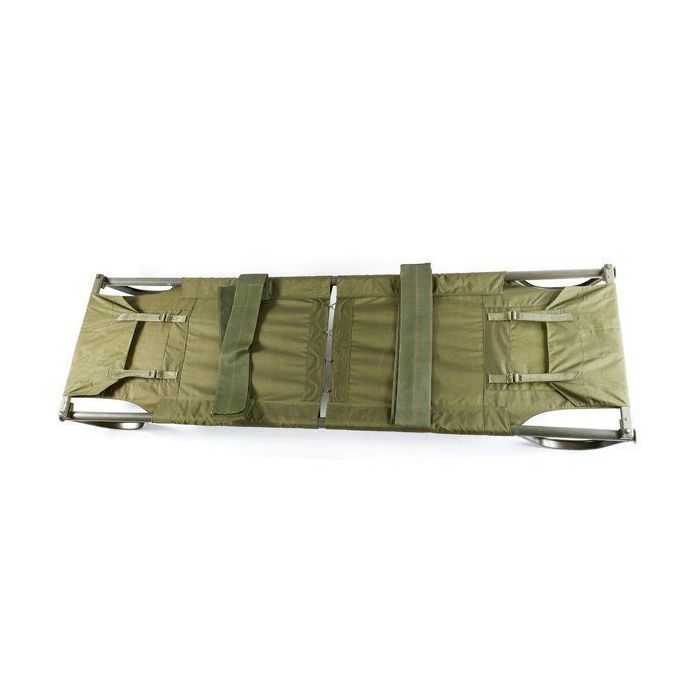 The Swedish Military Stretcher is an easily portable stretcher that has been designed and used by the Swedish military. Consisting of two folding metal assemblies that make up the frame and two pieces of canvas that connect to support the payload. When not being used the stretcher disassembles into the above mentioned sub components making it easy to transport and store the stretcher when not in use.

The Swedish Army Folding Stretcher is an authentic piece of Swedish military surplus. Designed to allow easy transport of injured soldiers, this stretcher due to the nature of the design has become wildly popular outside of the Swedish army.

Consisting of two folding metal assemblies that make up the frame combined with two canvas pieces that support the load, this stretcher is perfect for use in the field. More traditional stretchers are large and cumbersome, making them difficult to use anywhere other than in fixed spaces. The "take down" style of this stretcher makes it portable in the field for one man, and with your load properly secured a single person can move the stretcher. By far the most common use for this stretcher has been hunters who use it to move a recently killed deer out of the woods and back to camp for proper processing. Another extremely popular use of this stretcher is as a makeshift cot, which it will do quite well.

No matter what your intended or eventual use is of the Swedish Army Folding Stretcher, you can rest assured that it will meet your needs. The Swedish army has a long history of producing the finest gear for their army and this stretcher is no different. There is no better choice for a portable stretcher and we've got the best supply of them anywhere in the world.

Overall Rating
An interesting item
Review by William 7/2/16
We've had a bit of fun with this one with the kids. Got one of the older models with leather and canvas. The leather was in perfect shape; the canvas good and the metal supports a bit oxidized. There was a substantial old canvas smell; it's taken a fair amount of airing out in the sun. I don't deer hunt that often anymore but it would work well for hauling out. Last use was as a bench in front of a campfire and for carrying the cooler, tent, etc.
Overall Rating
Well made ingenious design EZ setup -pullout handles a nice feature.
Review by Joe 5/3/16
Priced to move- top quality EZ setup . As a litter or cot it will serve well. I bought mine with the Greek sleeping bag & as I already have a GI issue foam mat, this completes my camping needs. No more digging for boulders under the tent as I'm off the deck and reasonably comfortable. Recommend to all my pals who camp.

Overall Rating
Well made, like new, great priced stretcher.
Review by Jeffrey 9/9/15
Can't beat the price. Goes together without much trouble. You can give each half to different people in your group to tie to their rucksacks to spread the load. Built to last.
Overall Rating
no instructions, no problem...for us
Review by George 8/13/15
Just a hint, straps belong on the underside. A patient should not lie directly on straps and buckles. If the stretcher is to be set up that way, consider it an adult play platform rather than a stretcher or cot. We set it up as a stretcher (very easy and intuitive) and secured my twelve year old son with the straps. Then turned 90 degrees and he remained with the stretcher. For some reason his older sisters continued doing this a number of times, smiling the whole time. Works well with or without the handles pulled out. Have played with litters since the 70s as both a medic and nurse, this one ranks up there with the rest. Just need to get musty storage smell cleaned up. You should not hesitate to add it to your kit whether as a litter or a cot or if you should choose to assemble straps up, you can fill in the blank;-)
Overall Rating
NICE!!
Review by William 7/16/15
this was an impulse buy but glad i did it doubles as a cot mine was in new condition with the leather chads still in the straps did have a slight smell and white powder stuff on it but a good spray with the hose and a quick scrub and let it sit out in the Fl sun for a day took care of all that i layed down on it and with a cheap sleeping pad makes a cool cot at a very low price