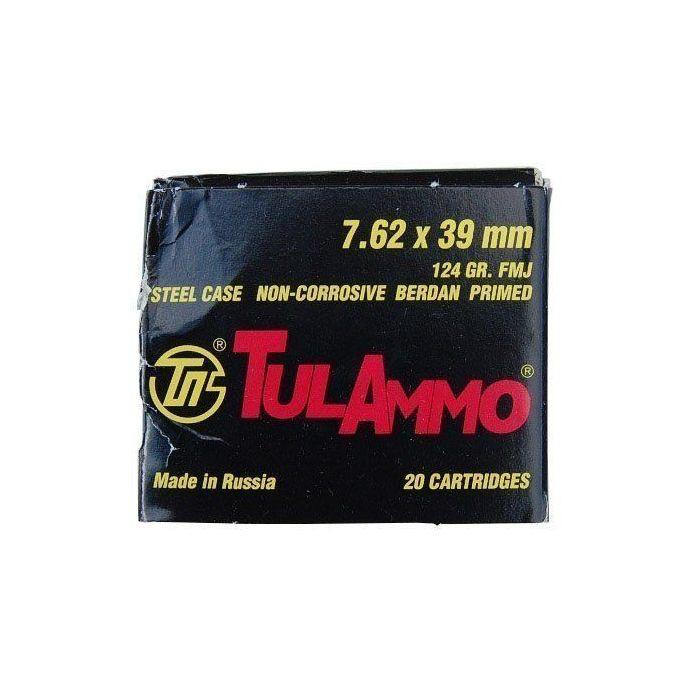 Notify me when this product is in stock
SKU UL076200

OJSC Tula Cartridge Works is a munitions manufacturer based in Tula, Russia. The company was founded in 1880, and has since gone on to become one of Russia's leading manufacturers of high-quality, steel-cased ammunition. For more than 130 years, the Tula Cartridge Works has been a domestic force. Today, the company has a large stake in the worldwide market for ammunition as well, and produces cartridges for armed forces, law enforcement agencies and civilians all over the world. In fact, its products are exported to North America, South America, Central America, Europe and the Middle East.

All Tula 7.62x39mm ammunition comes from the TULAMMO line of ammunition. Developed as an economy load suitable for high-volume sport shooters and hunters, the TULAMMO line is designed to retain optimal performance under any conditions. Where is the disconnect between typical suppliers of economy loads and Tula? Many suppliers of low-priced ammunition often use corrosive primers to bring down their manufacturing costs. Tula 7.62x39mm ammunition utilizes only non-corrosive Berdan primers and premium raw materials to ensure consistent performance.

Manufactured in Tula, Russia at OJSC Tula Cartridge Works, each box of Tula 7.62x39mm ammunition contains 20 rounds of non-corrosive, steel-cased cartridges. Each cartridge contains a 124 gr full metal jacket projectile, which provides for increased muzzle velocities. In fact, this load is capable of producing muzzle velocities that have been observed to travel at speed of up to 2,396 fps. Additionally, each cartridge features a phosphate polymer coating in an effort to not only provide enhanced protection against rust and corrosion, but to ensure smooth feeding and reliable extraction as well.

Tula 7.62x39mm ammunition is an excellent choice for:

Price
Value
Quality
Super AMMO!
Review by Jose USMCR 1/12/14
I have used this ammo in all of my AK pattern rifles and have never had an issue with it. The FMJ is much more reliable than soft point or hollow point. Some AKs will hang up on SP or HPs.
Price
Value
Quality
good heavy hitters
Review by Michael 1/11/14
This stuff is a bit more expensive, but its accurate and hits a bit harder than the 122gr TulAmmo. My only complaint is that its not factory sealed. I have come to love weather proof ak ammo with sealed primers and case mouths. No worries, I have plenty of hornady sealant.
Price
Value
Quality
great ammo
Review by Daniel 12/31/13
I have never had a problem with this ammo. I have had a russian saiga iz-132 that I've converted to a Romanian gp1975. I love tula ammo even the 223 round in my saiga 223,mini 14 and the m4.
Price
Value
Quality
Great ammo
Review by Robert 12/18/13
This is good ammo. It cycles in my N-PAP just fine. Well worth its price.