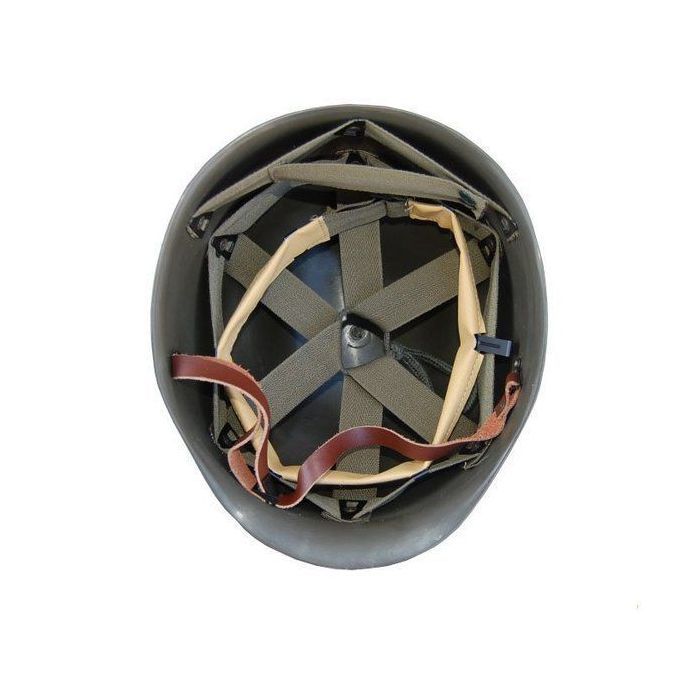 Are you missing the liner for your M1 helmet? Perhaps it is just broken and deteriorated beyond recognition. Either way, our U.S. M1 helmet liner is the perfect replacement. This beautiful reproduction brings you the original inner shell and adjustable suspension system for the M1 helmet – a mainstay from World War II through the mid1980s.

Notify me when this product is in stock
SKU USM1HL

The M1 helmet is a U.S. Military combat helmet that was standard issue during WWII. It remained in service through 1985 until its eventual replacement came about in the form of the PASGT (Personnel Armor System for Ground Troops) helmet, which offered superior protection and ergonomics. It was originally developed in 1941 as a replacement for the M1917 helmet and was redesigned just prior to the Vietnam War. Today, the helmet has reached icon status, as its design has inspired helmets used by several foreign armed forces and they are now considered hard-to-find collectibles.

The M1 helmet has a unique design. Really, it is two separate helmets that combine to offer a "one-size-fits-all" sizing. It is made up of an outer shell, which is constructed from a single piece of non-magnetized steel, and a liner, which is a hardhat-style helmet that contains an adjustable suspension system. Since we are not concerned with the outer shell – very interesting in its own right – I will move on to the liner.

As noted, the liner has the look of an actual helmet. This is because it features a hardhat-style shell to which the adjustable suspension system is attached. This entire assembly is designed for a tight fit inside the outer shell of the M1 helmet. The importance of the liner, however, rests with the adjustable suspension system, which allows the wearer to adjust the sizing of the helmet for a proper fit. It consists of several components, all of which are beautifully reproduced for our U.S. M1 helmet liner.

The U.S. M1 helmet liner includes an adjustable suspension webbing system, which is adjusted by way of a cotton drawstring. This webbing is riveted to the inner shell and provides for a higher or lower seating of the helmet on the head of the wearer. There is also a leather sweatband that is clipped to the outer ring of suspension webbing. This sweatband is also adjustable and determines how tightly the helmet will fit around the head of the wearer. Additionally, there is a nape strap. This strap is made of the same material as the suspension webbing and exists to support the back of the head just above the nape of the neck. Like the suspension webbing, this component is riveted to the helmet. Finally, there is a leather chinstrap. This chinstrap is adjustable via a small metal clasp. The chinstrap was not often used as a traditional chinstrap due to safety concerns and because of the fact that the outer steel shell included a much more practical chinstrap. This interior chinstrap was often strapped across the brim of the outer shell in an effort to hold both components of the helmet together.

I cannot make it any clearer. The U.S. M1 helmet liner is truly a beautiful reproduction that is suitable for a number of different applications. If you are looking for an inexpensive replacement that is on par with the real thing, then look no further. Consider this liner for:

The U.S. M1 helmet liner, while never intended for singular use, actually finds applications in the U.S. Military to this day. They are still used for training purposes by U.S. Navy SEALs candidates. They also find use in ceremonial units where they are often chromed.