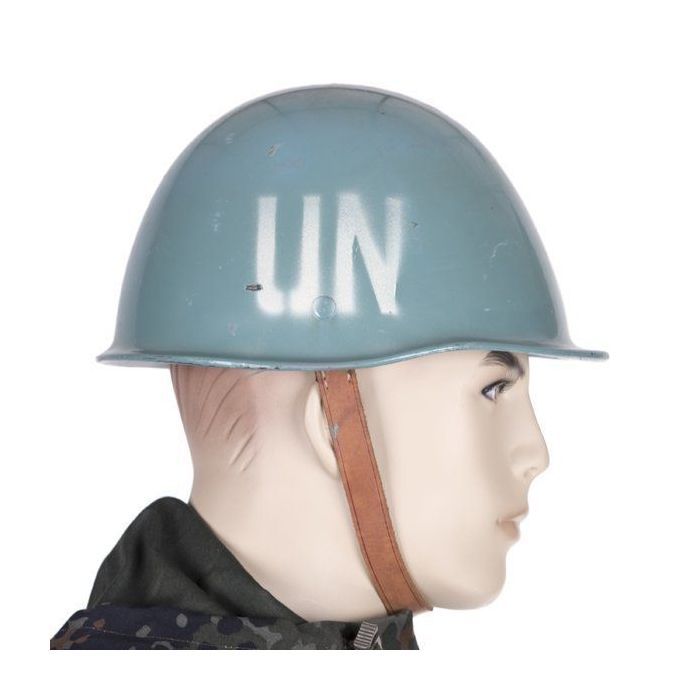 The Polish Army has deployed several times under the command of the United Nations Peacekeeping Forces. When deployed under UN command, Polish soldiers were issued these special UN blue versions of the standard Polish military police helmet. These authentic Polish Army UN Peacekeeper helmets are a reminder of the role that the Polish Army has played on the international stage in recent years.

The Polish Army has utilized this style of helmet for their military police corp for a number of years with great success. With the United Nations Peacekeeping Force consisting of duties very similar to what MP's are responsible for, it stands to reason that the majority of Polish soldiers assigned to the UN were military police. With duties consisting of traffic, access control, and enforcement of regulations the MP's are a capable and ready force for peace keeping.

Overall Rating
Little Small
Review by Chris P 1/27/19
Neat helmet. Mine has little to no wear and if it wasn't for some minor scuffs I would almost think it was un-issued. Unfortunately its about a size or two too small for me. Still a nice addition to my collection.
Overall Rating
as listed, but a little small
Review by Michael 10/18/16
I was pleased with my purchase, however when it came In I found the helmet was far too small for my head. Aside from my inability to wear it, it's still brilliant for collections. This is the real deal.
Overall Rating
As Advertised
Review by Bradley 3/21/16
The helmet I received is just like the one pictured and the description is right on the money. I am extremely pleased with my purchase and this goes well with my collection. I will state it again, the helmet I received is just as described in the write up.
Overall Rating
Not really what it is claimed to be
Review by Erik 11/6/13
First of all, this is a Belgian helmet, not German. It comes with Belgian flag stickers affixed (which is easily removed).
Second, it is not a UN/Peacekeeper helmet. The actual color is much less blue and more greyish than what is shown on photo. The chinstrap and also liner-helmet is grey, so I suspect these were used by the Belgian Air Force or Navy. UN helmets would also say UN on side and not have a Belgian flag.
Overall Rating
Belgian M51
Review by Andrew 10/11/13
These are great helmets, but they are not related to the United Nations or Germany - they are Belgian M51 helmets in air force colours, which is exactly what I hoped for based on the photographs and other reviews. The price is fair - about the equivalent of what surplus dealers would charge in Belgium.
Overall Rating
Not German. It is Belgium.
Review by Bradley 3/14/13
I received my helmet a few days ago and I am very pleased. However, it is NOT a German Peacekeeper's helmet. The flag on the side, of the helmet, and on the liner is that of Belgium. The German flag has the same colors but has horizontal stripes. The flag of Belgium has vertical stripes. I didn't buy it because it was German, I bought it because it was a Peacekeeper's helmet. Again, very pleased with my purchase as it is a great addition to my collection.
Overall Rating
A great quality helmet
Review by Jay 11/26/12
I just received my helmet today. It is overall good quality, mine even has the previous owners name written inside, which is kinda cool. They are 100% real and are usually hard to find, so I was pleased to get one at this low a price