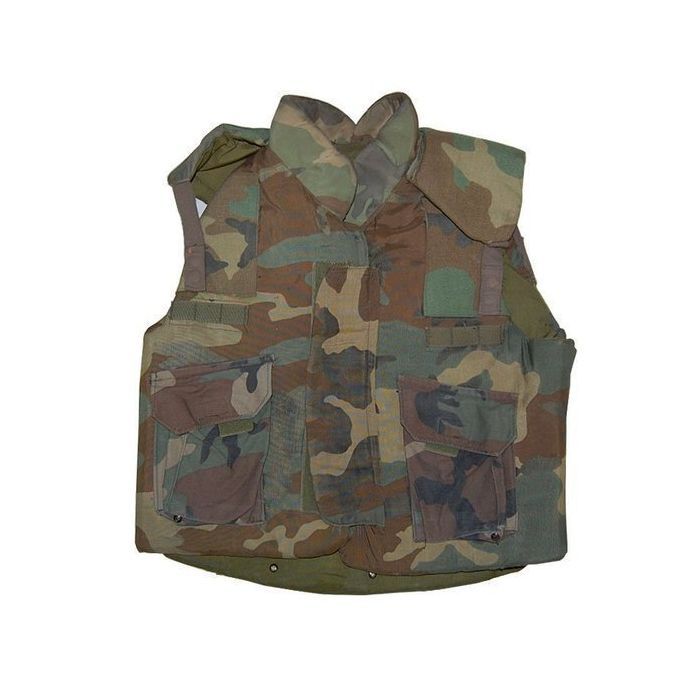 The USGI fragmentation vest is essentially a flak jacket and will shield the wearer from shrapnel, fragmentation, debris, and other indirect projectiles.

Notify me when this product is in stock
SKU USGI-FV

Those who order the USGI fragmentation vest do not only receive a wearable flak jacket capable of providing some level of real-life protection, they receive a genuine piece of United States Military surplus. Originally designed for and used by ground troops in the U.S. Army, the USGI fragmentation vest has since been replaced with more advanced body armor systems such as Interceptor body armor and the Improved Outer Tactical Vest (IOTV). Though the USGI fragmentation vest is outdated and has been previously issued, they remain in great shape, free from the rips, tears, stains and scents that are typically characteristic of military surplus items. And though we cannot guarantee any level of protection, each vest is likely capable of providing some level of real-life protection.

The USGI fragmentation vest is, as noted, a flak jacket that originally saw use with the U.S. Military. Constructed from Kevlar® paneling contained in a nylon cloth carrier, the fragmentation vest is designed to offer protection from shrapnel, fragmentation, debris and other indirect projectiles to the chest, back, sides and shoulders. The vest itself features a dual-Velcro® closure system as well as two flap pockets, which measure approximately 7 inches by 5 inches and are located just above the hips.

The final interesting aspect regarding the USGI fragmentation vest is the inclusion of its NATO Stock Number (NSN). An NSN is a 13-digit numerical code that identifies all standardized materials of supply that are recognized by NATO countries. The NSN for the USGI fragmentation vest is 8470-01-092-8501, which identifies it as woodland camouflage fragmentation body armor. The "8470" identifies it as a piece of individual equipment in the "personal armor" category while the "01" signifies that the piece is from the United States. The remaining digits signify its item number.

Whether you plan on fending off a horde of alien invaders or you just want to defend yourself from an onslaught of paintballs or airsoft ammunition, the USGI fragmentation vest is an excellent choice. Pick one up today.

Overall Rating
Very good for what it is
Review by Stephen 9/18/14
Back in the day, this was my second set of "issued" body armor - the first was a Vietnam era flak vest. This was a great improvement. While not bullet-proof compared to modern armors, it will stop .22s and similar low-velocity rounds most of the time. As I wore a Level II concealed vest on duty, I would have that on, then put this over it if needed. In that configuration it would easily rate a level III or IIIA (handgun rounds and buckshot). I can attest to the .22 protection - I was shot with one at point blank range (muzzle flash scorched the nylon carrier) and it did not penetrate. It did however motivate me to take my terminal leave ASAP! These are very well constructed, and with reasonable care and cleaning will last years. They are not comfortable in hot weather, and in cold weather they get very stiff. One side note though - they are slash and stab resistant (not proof) and can reduce the effects of blunt trauma. This not usually stated in the descriptions, as the vests were never designed for that, but practical use by myself and others I know have shown this to be the case. If you're looking for a basic armor that does not have to be bulletproof, these are a good choice.
Overall Rating
very serviceable haha
Review by Michael 12/31/13
I like these old things quite a bit. Not only are they frag resistant, but they will stop many common pistol calibers as well. They have a very classic US Army look and it gives you a good feeling to throw it on.
Overall Rating
Great jacket
Review by Me 8/8/13
I have a flak jacket in great condition, and its pretty comfortable.
Overall Rating
Good.
Review by Pootis bird 1/22/13
I got this, feels a bit heavy, but I can manage to wear this thing for a entire day. In pretty good condition, but I inspected it closely, I found a hole (about one centimeter) in one pocket. Some fabric strings are sticking out of some areas, but is uncommon. It also smelled kinda good when it came out of the package, but it faded. :C. To sum it up, great value for a old piece of gear, in pretty good condition as well.