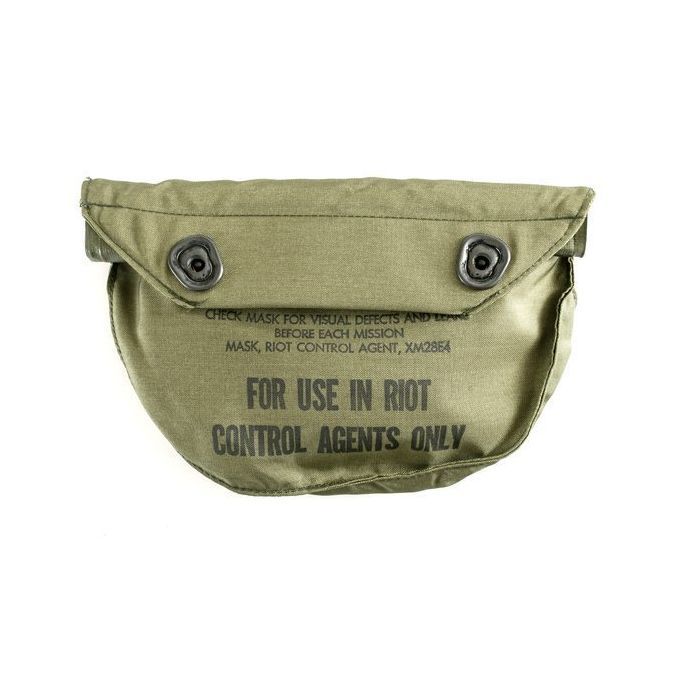 The USGI XM28E4 Gas Mask Bag is a mission specific gas mask carrier that was used in the US Army during the 1960s and 1970s to carry the XM28 gas mask. With extensive use in Vietnam, both the XM28 and its gas mask bag were carried by virtually every US soldier who was operating on the ground during the Vietnam War. US Army Command requested the XM28 specifically to address the needs of US soldiers who operated in the Viet Cong tunnels as the Viet Cong often used tear gas to try and repel US soldiers from entering and taking their tunnels.

The US Armed Forces often produces specialized equipment to meet the needs of specific soldiers and their unique roles in our military. One example of this was the production of the XM28 gas mask during the Vietnam War. Soldiers operating in Vietnam, where the weather and climate was hot and very humid had severe issues with the current gas mask the M17. The M17 was heavy, had severely reduced visibility, and was often considered overly protective when the threat most soldiers were facing was tear gas in tunnels not chemical weapons.

The US Army responded to soldiers needs and produced the XM28 gas mask. With the XM28, soldiers had a lightweight gas mask that was designed to offer protection from the primary threat in Vietnam which was tear gas or other riot control agents. This resulted in an improved field of vision, reduction in weight, and made the job of US soldiers who were tasked with taking Viet Cong tunnels more successful. As with any newly issued equipment, the US Army had to produce supporting gear for the XM28 which included this mission specific gas mask bag.