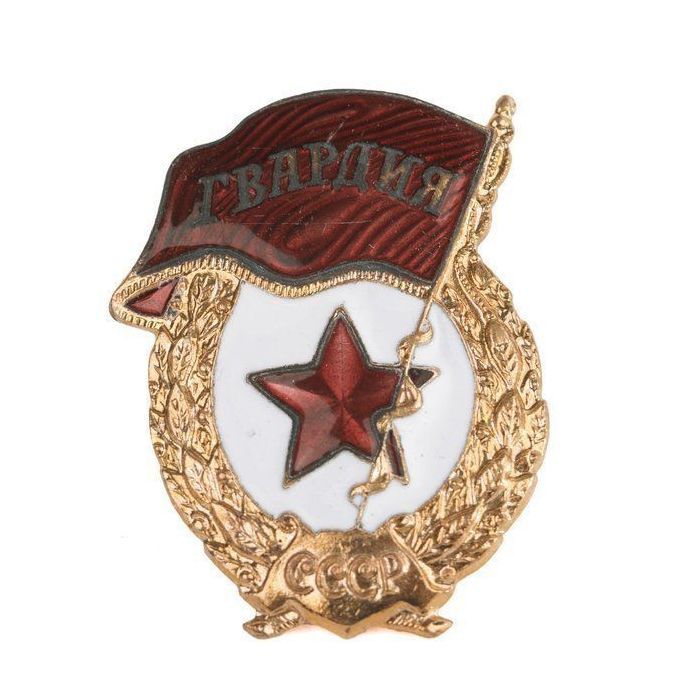 5 4 (4)
The USSR Elite Guard Badge is an original Soviet Union Cold War-era military badge that was issued to soldiers who belonged to the Elite Guard. Formed in 1941 with their origination coming from the distinguished service during the Eastern Front. During the entire history of the Soviet Union, the Elite Guards were recognized as units in the Soviet army of distinction.

The Soviet Elite Guard since it was first formed in 1941 had a long history of being the most distinguished units in the entire Soviet Army. With Guards divisions being formed in the Soviet satellite states as well as Russia, even after the fall of the Soviet Union Guard divisions remained in the new army forces in the Ukraine and Belarus. This authentic original Elite Guard badge would be worn proudly by soldiers who were members of the Elite Guards and now after the fall of the Soviet Union this CCCP marked badge is a nice collectible from the Cold War era.

Overall Rating
Cool and good quality
Review by TJ 9/11/16
Verified Buyer
Bought two. Very nice piece of history.
Overall Rating
Cool piece of cold war history!
Review by Evan 8/28/16
Verified Buyer
The medal I received was in batter shape than the one pictured.
Great addition to my collection!
Overall Rating
Neat Cold-War artifact
Review by DAN 2/5/16
Verified Buyer
Got two of these just because they looked "cool". New-in-box condition. Not sure what I'm going to use them for but they are larger than I expected and the bright Soviet red really stands out. Would look really nice in a shadow box display with your Nagant Model 1895!
Overall Rating
Neat piece of cold war memorabilia
Review by rybur 1/30/16
Verified Buyer
Picked up two of these; one had a little more "gold" one the flag letters than the site photo, and the other is 100%. They have threaded rods on the backs which have a round retainer that screws on and is a similar gold color. Both the badge and retainer have a small star maker's mark on them. Each came in a small cardboard/paper box that was then packed in loose plastic. Neat pieces!