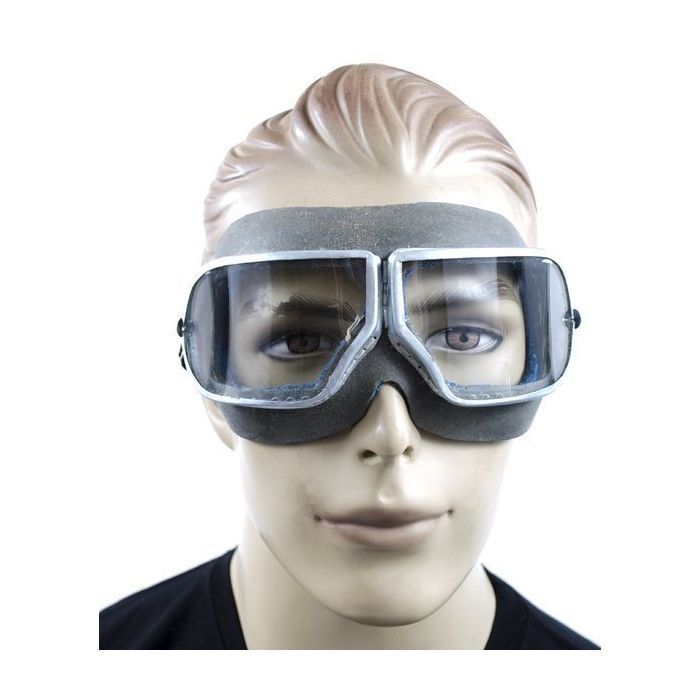 The Soviet USSR Pilot Goggles are a pair of vintage protective goggles that were previously issued in the USSR Soviet Army and Air Force. These protective goggles were seen being worn by Soviet troops and pilots during the Cold War. The distinctive "Soviet" look of these goggles has made them popular even today. We think they not only look cool but they are still functional 40 years after they were made.

The Soviet Pilot's Goggles are an interesting pair of vintage military goggles from the former Soviet Union. In Soviet Russia, the military leadership determined that these goggles were perfect. Their perfection made them ideal for being issued to pilots, tank commanders, and motorcycle corps instead of each having their own specialized protective goggles.

Where these goggles perfect? Perhaps! We have tested them on a motorcycle ride. They performed great offering good protection from debris and wind. As an added bonus we had tons of compliments from people we saw on the street. The nice thing about these goggles is they are designed to be rather large so they will fit over top of prescription eye glasses with no issues.

Overall Rating
I think this might be my most favorite purchase from here. :)
Review by Klint 1/14/17
Mine arrived last night ( 13 Jan 2017 ) here in Pullman, and though I didn't plan to use this for cold weather.. it worked great. I wear glasses and the review by Nicholas is fairly accurate. Fortunately my eye glass design allows it to be put up on my bridge. It pinched a little but it wasn't that bad and the liner (kind of orange felt like) under the outer rubber helped keep my upper face warm in 9 F degree weather. Also it didn't fog up either.. I think my glasses kind of did after I got home to my warm dorm room. Definitely a great buy. And it comes in it's own cardboard box (that's definitely worth keeping for its looks). :)
Overall Rating
Failed state, tough goggles
Review by Joe 10/30/16
Ordered to augment my leather flite cap. New in box, these will serve well on road, in the air or ground. . Be careful with strap adjustment as hardware thin metal. Good field vision and looks cool too Da'
Overall Rating
Great goggles, not for glasses
Review by Nicholas 5/7/15
Unless the bridge of your glasses are right up against the bridge of your nose these will not fit over a pair of glasses. The hinge in between the lenses of the goggles fits very snugly against the bridge of the nose. Otherwise these goggles are great and are cheaper here than most other places. Looks like they'd be great for motorcycle riding but I question the impact resistance of the lenses. Mine had an orange felt liner under the rubber part instead of a blue liner. Apparently the color may vary (according to other sites.) no sign of rust on my pair.