You cannot spell Winchester USA45A without "USA". You also cannot spell it without "win", "chest" or "sauce", but that is beside the point. What is the point? If you are not buying and shooting Winchester USA White Box ammunition, then I am questioning your patriotism!

True, blue Americans know that Winchester USA White Box ammunition is the ammunition that their firearms crave. Feeding them anything less would be akin to treason, and you wouldn't want to commit crimes against you nation, would you? I thought not.

Each box of Winchester USA45A .45 ACP ammunition is a product from the Winchester Repeating Arms Company. Developed as a middle-of-the-pack economy load marked by its consistent performance and value, this ammunition is ideal for a range of application, including target shooting, training exercises, plinking and more. Each box contains 50 brass-cased cartridges, each of which contains a 185 gr full metal jacket projectile. These non-corrosive cartridges are perfect for use with any firearm chambered for the .45 ACP cartridge, and are prime candidates for reloading as well.

Winchester USA45A .45 ACP ammunition is now available from Keepshooting.com. Pick up a box today for only $35.58. 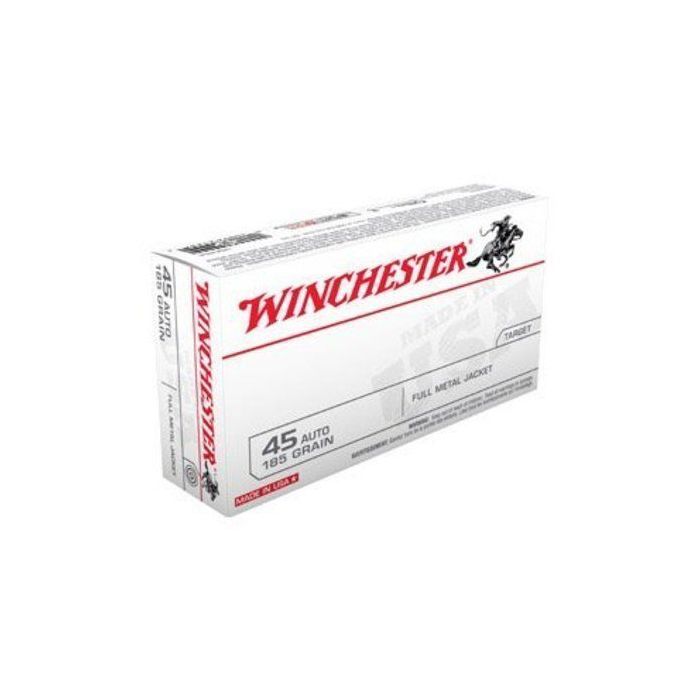 For many, Winchester means fine weaponry. For most, it means ammunition. As a major global supplier of high-quality ammunition, Winchester has long held a reputation for its second-to-none research and development practices as well as their aforementioned innovative spirit, which has yielded some of the world's most popular firearms cartridges. It is also responsible for their inventive lines of ammunition, like the "USA White Box" line.

Each box of Winchester USA45A .45 ACP ammunition contains 50 non-corrosive, brass-cased cartridges. Each cartridge is packed with a 185 gr full metal jacket projectile, which provides for positive functioning and increased muzzle velocities. In fact, these cartridges are capable of producing muzzle velocities that have been observed to travel at speeds of up to 910 fps. And as previously mentioned, these cartridges are reloadable – perfect for those who prefer to get the most "bang" for their buck.

The box may be white, but the product is more characteristic of gold. Grab your Winchester USA45A .45 ACP ammunition today for just $35.58.